by Lisa Auer*
Since the beginning of the Syrian conflict in 2011, France has welcomed more than 10,000 Syrian refugees and Palestinian refugees from Syria from the over five million people who fled the conflict. Four thousand five hundred were granted refugee status in accordance with the 1951 Geneva Convention, while the rest received subsidiary protection (protection subsidiaire). Subsidiary protection is a special asylum regime granted, after examination of the request, to all people who cannot enjoy refugee status but face in their country of origin serious risks of death penalty, torture or ill-treatments, or grave, direct and individual threat to life because of indiscriminate violence in situations of international or non-international armed conflict.[1]
Based on the 1951 Geneva Convention and the European directives on asylum, the French legal framework is enshrined in the Code of Entry and Residence of Foreigners and the Right of Asylum (Code de l’entrée, du séjour des étrangers et du droit d’asile) called CESEDA. Every person falling under the scope of Article 1 of the 1951 Convention or under the protection of the UNHCR should be granted refugee status according to Article L711-1 of the CESEDA. Further, if the person does not meet all the conditions for the refugee status but is facing a serious threat as mentioned above, s/he should receive subsidiary protection.

In seeking protection, fear of persecution should always be related to an ’oppressive‘ country which the person is fleeing. Protection is granted on the basis that the person cannot avail his/herself of the protection of the country in which s/he has nationality; when the person cannot avail his/herself of any nationality, the country of affiliation (pays de rattachement) – where the claimant is living – is considered. According to Article 1A (2) of the 1951 Convention, this subsidiary criterion can only be used if the person does not have a nationality. However, this notion should be understood broadly, as difficulties arise in determining nationality when claimants are not in possession of official travel or identity documents.  The National Court for Right of Asylum (Cour nationale du droit d’asile, herein after the Court) may consider some claimants as de facto stateless in order to examine their application on the “country of affiliation” basis. However, de jure statelessness can only be determined by the French Office for the Protection of Refugees and Stateless Persons (OFPRA).[2]

Considering the high rate of granting protection, one question remains: why do so few refugees choose to apply for asylum in France? The answer may be due to the following: 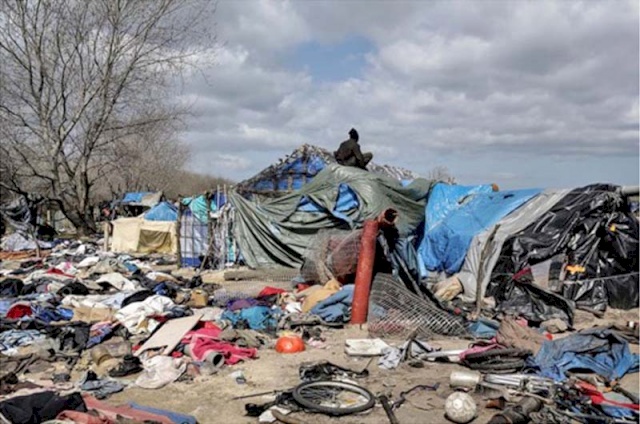 Photo: Picture taken after the evacuation and destruction of the so-called “Jungle de Calais” camp[14]
As in many other European countries, France does not have a clear refugee policy in general and no policy at all regarding Palestinian refugees from Syria. On 20 September 2016, during the Summit for Refugees and Migrants, the French President François Hollande stated in front of the UN General Assembly that “At the same time [France] should insure [its] humanitarian duty, make the right of asylum prevail, and [it] should also control [its] border.”[15] This statement is indicative of the struggle in Europe – and particularly France - with the refugee dilemma.

As part of the UNHCR Resettlement Program, France accepted the resettlement of 500 refugees from Syria in 2014 and 2015, and 1,500 in 2016. To implement the program, representatives of OFPRA are travelling on ‘humanitarian missions’ to Egypt, Jordan and Lebanon thus far,[16]  in order to ‘select’ the most vulnerable refugees and to ‘resettle’ them in France. At the beginning of 2015, 512 refugees from Syria benefited from this program. While UNHCR insisted on the criterion of vulnerability, each state is allowed to choose its own criteria and thus to select based on academic studies, special links with the future host country, etc. en.odessa.natashaescort.com OXFAM requested that the European countries focus on the extreme vulnerability of Palestinian people in the ‘selection’ process.[17] The French government, whether through its official statements or asylum policy, has failed to address the exacerbated vulnerability of Palestinian refugees from Syria.