Palestinian Refugees: Multiple Displacements and the Issue of Protection ( Issue No.59, March 2017) 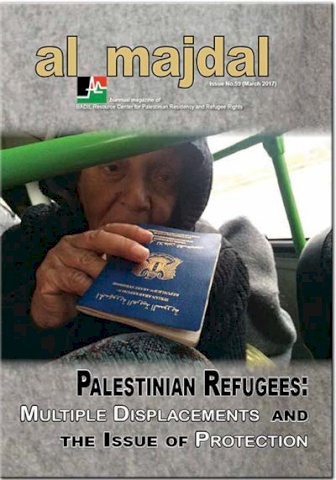 This issue discusses the multiple displacements of Palestinian refugees from the perspective of the international response or lack thereof. The articles examine the asylum procedures of a number of countries spanning Europe and the Americas.

Specifically, this issue contains articles highlighting the situation of Palestinian refugees from Syria seeking asylum in the United Kingdom, France, Germany, Greece, and across Europe.. This is a follow-up to al-Majdal No. 56 and 57 that focused on Palestinian refugees from Syria in Lebanon, Jordan, Egypt, Turkey and inside Syria itself and analyzed the situation of these refugees in Europe.

Al-Majdal No. 59 brings back to the fore the long-neglected issue of the protection gap of Palestinian refugees across a wide range of geographical perspectives.

Due to its geographical location, Greece was the first European Union (EU) member state that many refugees fleeing Syria reached. Its proximity to Syria and also to Lebanon and Turkey - two of the main receiving countries of refugees from Syria - by land and sea resulted in a mass influx of refugees into Greece. Along with thousands of Syrians, a high number of Palestinian refugees from Syria ended up in Greece.1 The exact number of refugees from Syria that have entered Greece is difficult to assess accurately, as most of them did not claim asylum in Greece. Some were unable to do so due to the overload of refugees and the inaccessibility of the asylum system, while others preferred to continue to other EU countries and claim asylum there.2

The Palestinian refugee problem is seen as the world’s most interminable case of displacement.[1] The United Nations Relief and Works Agency for Palestine Refugees in the Near East (UNRWA) defines Palestine refugees as “persons whose normal place of residence was Palestine during the period 1 June 1946 to 15 May 1948, and who lost both home and means of livelihood as a result of the 1948 conflict.”

by Lisa Auer*
Since the beginning of the Syrian conflict in 2011, France has welcomed more than 10,000 Syrian refugees and Palestinian refugees from Syria from the over five million people who fled the conflict. Four thousand five hundred were granted refugee status in accordance with the 1951 Geneva Convention, while the rest received subsidiary protection (protection subsidiaire). Subsidiary protection is a special asylum regime granted, after examination of the request, to all people who cannot enjoy refugee status but face in their country of origin serious risks of death penalty, torture or ill-treatments, or grave, direct and individual threat to life because of indiscriminate violence in situations of international or non-international armed conflict.[1]

IN FOCUS: Palestinians in the Americas - Lands of Opportunities Untapped?

Photo: Demonstration in solidarity with the Palestinian people outside the La Moneda presidential palace in Santiago, Chile (Source: bbc.com)

Once, in a testimony, Mr. Hannah Youssef Safieh, a Palestinian who lives in the city of Natal (in northeast Brazil), recalled an interview he gave to a French magazine in 1968 when he was in Belgium for a large event in solidarity with Palestine. When asked about whether Palestinians had a slogan akin to the legendary Jewish phrase “Next year to Jerusalem,” he replied: "Of course we have: Sanaúd! (We will return!)” This traditional expression of the Palestinian diaspora reveals the desire to return to the place from which they were displaced, their homeland. It was exactly this same expression that in 1982 became the title of one of the largest political organizations of the second generation of Palestinians in Brazil, the Cultural Association Sanaúd. Sanaúd was formed by a group of young people from the Syrian, Lebanese and Palestinian Diasporas; residents in Brazil who often met in an office named "Sociedade Árabe Palestina" located at Avenida Senador Queiróz in Sao Paulo.

During the first half of the twentieth century Cuba was a prosperous country and had a vibrant economy that attracted immigration from many countries around the world, including Palestine. Immigration and emigration in Cuba significantly affected the demographic composition of the island, including that of the Palestinian community.