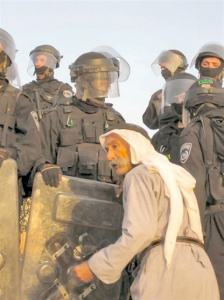 The Russell Tribunal will not do so for the first time; it can build on similar, earlier efforts undertaken by others, including Palestinian and anti-Zionist Israeli scholars and activists,  UN experts on human rights in the Occupied Palestinian Territory John Dugard and Richard Falk, and the South African Social Science Research Council.[1]

In this spirit of continuity and collective effort, this particular testimony is submitted on behalf of the Palestinian Boycott, Divestment and Sanctions National Committee (BNC). The BNC studied the applicability of the crime of apartheid to Israel’s oppressive regime over the Palestinian people in 2008 and published its analysis and recommendations in the Strategic Position Paper “United against Apartheid, Colonialism and Occupation – Dignity and Justice for the Palestinian People.”[2]The BNC document was widely discussed and adopted by the solidarity movement; it was presented to the UN Durban Review Conference in 2009, and it continues to guide the activities of the BNC-led global campaign of boycotts, divestment and sanctions (BDS) against Israel until it complies with international law and respects the human rights of the Palestinian people. The BNC is the currently largest coalition of Palestinian civil society inside and outside occupied Palestine. It is composed of unions, movements, campaigns, associations, NGOs and their networks among all sectors of the Palestinian people: those under Israeli occupation since 1967, the refugees in exile, and those living in their homeland under Israeli rule since 1948.  The view of Palestinian identity and Palestinians as a distinct racial group for the purpose of the definition of apartheid presented in this testimony is the view of the BNC. It is anchored in the direct experience and analysis of Israeli oppression by a large sector of the Palestinian people.

Palestinians do not usually identify themselves as a race or a racial or ethnic group, and most would even object to such labels, which are understood to be the tools and core elements of the ideology and practice of the oppressor, who has divided Palestinians into numerous ‘ethnic’ or ‘religious’ sub-groups for the purpose of oppression and domination. All Palestinians, however, agree that they are victims of racism or racial discrimination as a group, because of their identity as Palestinians. Most Palestinians also agree that the group of the oppressor is mainly composed of persons who are Israeli Jews and endorse the racist colonial ideology and practice of political Zionism.[3]

It is the position of the BNC that Palestinians meet the broad definition of race or racial group adopted by modern human rights law, in particular ICERD, and that the entire Palestinian people constitutes one ‘racial group’ for the purpose of the definition of apartheid: Palestinians identify themselves as a group of people who share a common origin, history and culture, as well as social and political structures and networks, that have ensured connectedness and solidarity despite decades of oppression and forced displacement.  The entire Palestinian people is the oppressed ‘racial group’, and its members are the victims of apartheid, regardless of their current geographic location or legal status.

In more specific terms, the following core-elements of Palestinian identity justify the characterization of the Palestinian people as a racial group for the purpose of the definition of apartheid:

First, all Palestinians, the refugees in exile, those under occupation in the OPT (West Bank, including Jerusalem, and the Gaza Strip), those who have remained in the part of the homeland that is now Israel –and irrespective of social class or religion - identify themselves as the indigenous people of Palestine, their country, where they lived and held citizenship until the end of the British Mandate in 1948.

Second, Palestinians define themselves as victims of the Zionist movement (pre-1948) and Zionist Israel (since 1948), which – claiming an exclusive right of the ‘Jewish people’ to ‘Eretz  Israel’ (i.e., the area of Israel and the OPT) -  have destroyed their country, Palestine, and expelled its indigenous people, in order to establish and develop the exclusive Jewish state: from the initial Nakba (catastrophe) in 1947-1948, when approximately 80% of the Palestinian population was forcibly removed to make place for the state of Israel, and until today, when Israel’s combined system of racial discrimination and military rule has expanded into the OPT, and facilitates further expropriation and colonization of Palestinian land in the entire area of former Palestine.

Finally, all Palestinians, the refugees in exile, those under occupation in the OPT, those who have remained in the part of the homeland that is now Israel –and irrespective of social class or religion - identify themselves as part of one Palestinian people entitled to freedom and self-determination. Palestinians have done so before 1948, when they formed a national resistance movement to fight oppression of their political freedoms by the British Mandate and colonization by the Zionist movement, and they have done so since the Nakba of 1948, and despite their dispersal, through the Palestine Liberation Movement (PLO). The PLO was formed as the sole legitimate representative of the Palestinian people by Palestinians outside and inside the homeland, in order to protect Palestinian unity and national identity, and to advance the collective and individual rights of the people. Since 1974, the United Nations has recognized that Palestinians are a people, that their rights to self-determination, national independence and sovereignty, and the right of the refugees to return to their homes and properties, are “inalienable”, and that the PLO is the representative of the Palestinian people.

*Ingrid Jaradat Gassner works as coordinator of campaign development with the Oxford University-based Republicans Without Republics program. She is a co-founder and the former director of Badil Resource Center for Palestinian Residency and Refugee Rights.

[3]              The BNC thus defines the racial group of the oppressor as the group of Zionist Jewish Israelis, i.e., persons who identify themselves as ‘Jewish nationals’ and Zionists and are citizens of Israel by virtue of its Law of Return. Although Israel’s discriminatory law treats all Jews in the world as ‘Jewish nationals ’ who are entitled to the privileged status of ‘Jewish nationals and citizens’ in Israel, not all persons of Jewish faith can be considered part of one racial or ethnic group for the purpose of the apartheid definition. Only those who have voluntarily immigrated to Israel, hold the privileged legal status and adhere to Israel’s political ideology, Zionism, constitute the relevant ‘racial’ or ‘ethnic’ group in this context. Supporters of Zionism abroad, irrespective of their religious believes, may be held accountable for encouraging and cooperating with the racial group of the oppressor.