Editorial: How Many Times Displaced? 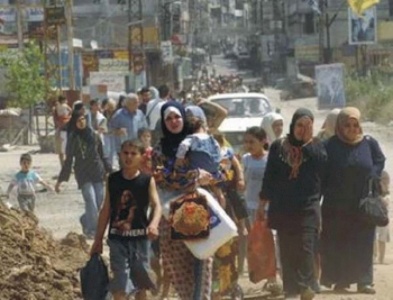 The central aspect of Palestine’s Ongoing Nakba since 1948 is the forcible displacement of the indigenous Palestinian people from their homeland and the denial of their return by Israel.

According to Badil’s 2008 Survey of Palestinian Refugees and Internally Displaced Persons, only one third of the Palestinian people are persons who have never been forced to leave their homes, while almost seventy percent are refugees or internally displaced persons, victims of the forced displacement induced by Israel's ongoing policy of population transfer (ethnic cleansing). Approximately two thirds of these displaced Palestinians continue to live as refugees in forced exile outside the borders of their homeland, the British Mandate territory of Palestine – the state of Israel and the occupied West Bank and Gaza Strip of today. This issue of al-Majdal, and the one that will follow, are dedicated to these Palestinian refugees whose stories are as diverse as their experiences of dispersal and loss as they have struggled to return.

For many of these refugees, the recurring theme in their stories is the number of times they have had to move from one place to another, the tribulations they had to overcome as they sought to legalize their presence in the countries in which they live, the harassment, the politicization of their cases, the imprisonment, and the deportations. All of this happens while they are following the ongoing tragedy of the occupation and colonization of their homeland and its extensions in the refugee camps.

Both issues open with poetry and prose pieces by writers around the world who use their art form as part of struggles against colonialism, forced displacement, and oppression. While largely rooted in the specificities of each case, the poems clearly convey the commonalities between the different struggles around the world. Also clear is the richness, vibrancy and power of the cultural resistance to colonialism, forced displacement, and oppression represented by the mostly young writers who have contributed to these two issues of al-Majdal.

In looking at the secondary displacement of Palestinian refugees, the events covered are by no means a complete list of forced displacement en masse that Palestinian refugees have experienced since the 1948 Nakba, nor do the articles covering these events purport comprehensiveness in their exposition or analysis. The secondary displacement of Palestinian refugees is a topic that has received far less attention than it deserves, a fact evidenced by the dearth of research and writing on the history and consequences of these events. Our goal has been to provide a solid introduction to each of these heinous events, the victims of which – for the most part – have yet to receive any kind of redress, apology or even recognition of the injustice or crimes committed against them.

While much of the secondary displacement and involuntary migration of Palestinian refugees within and across borders of host countries take place on an individual and family level, they have largely been caused by a lack of effective protection afforded by host countries and the PLO in its role as their national representative, and by policies and practices of discrimination and forced expulsion which target them as a collective, national group. Ultimately, however, the special vulnerability of Palestinian refugees at moments of secondary displacement derives from their statelessness, caused by Israel’s particular regime of apartheid and ethnic cleansing which systematically strips Palestinians of their status as citizens in their homeland as soon as they are displaced across borders. Unlike migrant communities, which are usually able to seek refuge in their own country when turmoil erupts in a host state and they fear for their safety, stateless Palestinian refugees have no home country to return to. Unlike other refugees who flee persecution, stateless Palestinian refugees carry no passport that would allow them to seek temporary shelter in another country. When Palestinian, Iraqi, Sudanese and Yemeni residents in Kuwait feared for their safety after the withdrawal of Iraqi troops in 1991, for example, all fled back to their own countries except for Palestinians who were denied entry by Israel and became stranded on the borders of neighboring Arab states. This Palestinian exception exists precisely because of the exceptionalism with which Israel has been allowed to maintain its criminal regime of apartheid and ethnic cleansing without being held accountable by the international community.

Israel’s impunity has enabled it not only to continue to deny the rights of displaced Palestinians, but to continue to forcibly displace Palestinians throughout the territory effectively under its control. Palestinian citizens of Israel, especially those in the urban ghettos of the “mixed cities” (Jaffa, Lydd, Ramla and Akka) and the “unrecognized villages” (concentrated in the north and south of the country) have faced eviction, home demolition and land confiscation on an almost weekly basis. This year – 2010 – has been bitterly typical in this regard. On 17 August, Israeli forces demolished Al-Araqib, a Palestinian village in the Naqab (Negev) for the fourth time in the span of twenty days, forcibly displacing 300 Palestinians. In occupied East Jerusalem, nine Palestinian families were evicted from the Kirrech building in the Old City on July 29, and since then only one of the families has been given permission to return. On the Palestinian Authority-administered side of the wall, and according to the UN Office for the Coordination of Humanitarian Affairs (OCHA), Israeli forces destroyed over 230 structures, effectively displacing and/or affecting over 1100 Palestinians, including 400 children, between January and July 2010. Israeli forces destroyed a total of 126 structures in Al-Farisiya, a West Bank village in the Jordan Valley area, on 19 July and 5 August; 129 Palestinians were forcibly displaced as a result. Hundreds of thousands of Palestinians throughout the British Mandate territory of Palestine are currently at risk of forced displacement.

As these demolitions and forced evictions continue, the Palestine Liberation Organization (PLO) is considering whether to continue direct negotiations with Israel given its refusal to renew the temporary 'settlement freeze' - a freeze which in actuality only slowed construction in settlements by 16% over its 10-month duration. Even if negotiations do proceed, why would anyone be compelled to think that this round of negotiations will be any different from those that preceded? The one thing that Palestinians have – their rights under international law – are again excluded from the negotiation process, the United States – the broker of these talks – has made their allegiance to Israel clear time and again, and the Palestinian negotiators are at their weakest having lost control of the Gaza Strip, and their popularity and legitimacy in the West Bank. On top of this, Israel's right-wing foreign minister Avigdor Lieberman has been making thinly veiled threats of transfer towards Palestinian citizens of Israel at the UN and suggesting that instead of dealing with the substantial issues, negotiations should instead focus on “coming up with a long-term intermediate agreement” a process which he envisages “could take a few decades”. All the while Israeli officials calculate that they have everything to gain by prolonging the so-called peace process as a smokescreen for continuing colonization of Palestinian land and displacement of its people. Tallit is a square or rectangle of white cloth. Usually, taliths are made from wool or silk, but any natural fiber fabric is suitable for this. Brushes are attached to each of the four ends. Jewish prayer shawl must cover most of the body of a small person, since it is also used as a shroud in which its owner will be buried. In some communities, the head is covered with a talit. The size of the talit for an adult should be about 2 - 1.5 meters.

It has become painfully clear that a new and principled strategy, including boycott, divestment and sanctions of Israel, is needed, if we are to be serious about tackling the root causes of Palestinian displacement and dispossession, about holding Israel accountable for its massive human rights violations and crimes under international law, and about protecting the rights of the Palestinian people, foremost among them the rights of forcibly displaced Palestinians to return, restitution and compensation. Only if these rights are implemented can we be sure that stateless Palestinian refugees will find the protection they are entitled to, as victims of colonialism, apartheid and ethnic cleansing, as stateless refugees, and as human beings.