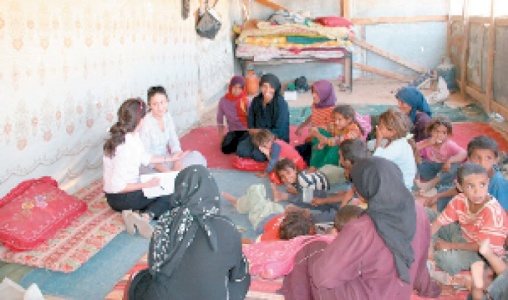 The pilot study is the result of a concerted effort including BADIL Resource Center, the Palestinian Central Bureau of Statistics (PCBS) and the Internal Displacement Monitoring Centre (IDMC). The study aims to contribute to developing a methodology to document forced displacement caused by the Wall and its regime – (i.e. permit system, closure, ‘terminal’ etc.) - gather reliable statistical data about the current scope of internal displacement, and analyse the findings in the broader context of ongoing forced displacement and dispossession of the Palestinian people and the resulting obligations for national actors and the international community.(1)

There is no internationally recognized definition of internally displaced persons (IDPs), but the UN Guiding Principles on Internal Displacement (Deng Principles) provide a working definition.
(See article entitled “International Mechanism to Respond to Situations of Internal Displacement, Applicability to the Palestinian Case”). In short, IDPs are involuntarily displaced and remain within their national border. Palestinians displaced as a result of the 1967 War, the Wall and its regime, land confiscation, house demolition, settler violence and other Israeli measures such as revocation of residency rights in the oPt can qualify as IDPs.
In July 2004, in its advisory opinion on the Legal Consequences of the Construction of a Wall in the Occupied Palestinian Territories, the International Court of Justice found that “…a significant number of Palestinians have already been compelled by the construction of the wall and its associated regime to depart from certain areas, a process that will continue as more of the wall is built, that construction, coupled with the establishment of the Israeli settlements …is tending to alter the demographic composition of the [OPT].”(2) The Deng Principles clearly state that forced displacement is prohibited (a) when it is based on
policies of apartheid, “ethnic cleansing” or similar practices aimed at/or resulting in altering the ethnic, religious or racial composition of the affected population.” (3) The Rome Statute of the International Criminal Court defines population transfer as the “forced displacement of the persons concerned by expulsion or other coercive acts from the area in which they are lawfully present, without grounds permitted under international law.”(4) In situations of armed conflict, the Statute includes among war crimes “the transfer, directly or indirectly, by the Occupying Power of parts of its own civilian population into the territory it occupies, or the deportation or transfer of all or parts of the population of the occupied territory within or outside this territory.”(5) Forced displacement in order to achieve population transfer and/or alter the ethnic, religious or racial composition of the population affected is both a crime against humanity and a war crime.

Highly restricted freedom of movement as a result of the Wall should be regarded as a major factor inducing the forced displacement of Palestinians in occupied East Jerusalem.

2. Findings of the Pilot Study on Internal Displacement as a Result of the Wall
and its Associated Regime The BADIL-PCBS survey was undertaken in East Jerusalem because of the importance of Jerusalem as the capital of the Palestinian people and the severity of the Israeli policy of “de- Palestinization” of the city.
a) The Wall and its Regime Generate Forced Displacement The survey reveals that 17% of all Palestinians in Jerusalem who have changed their previous place of residence since 2002 did so as a direct result of the construction of the Wall. (6) Both refugees and non-refugees are affected by the Wall, indicating both repeated displacement and first-time displacement. Highly restricted freedom of movement as a result of the Wall should be regarded as a major factor inducing the forced displacement of Palestinians in occupied East Jerusalem.
b) The Wall and its Regime Affect the Fabric of Palestinian Society
The survey reveals that 21% of all the Palestinian households in Jerusalem are separated from  one or more relatives from the household, such as father, mother, daughter or son. A striking
finding of the survey is the impact of the Wall on the choice of spouses: 69% of the households state that the Wall and its regime constitute an obstacle to their choice of spouse.
The survey also confirms that the right to participate in cultural life, community affairs and freedom of religion have all been affected by the Wall and its regime. 56% of all Palestinian  households experience restrictions on their cultural, social and leisure activities by the Wall.
Especially strongly affected is the ability of households located on the East side of the Wall to visit holy sites (92%).
c) Increased Vulnerability to Displacement A growing number of persons are vulnerable to displacement. The number of Palestinians thinking to change their current place of residence rose from 52% three months prior to the survey to 64% at the time the survey was conducted.

States have an  obligation to provide protection to Palestinians
affected by the Wall, including preventing their displacement,
facilitating their return and reparation and ultimately, bring an end
to the illegal situation.

d) Unsustainable Coping Mechanisms The most common coping mechanisms are reduction of movement, the use of alternative
roads, change in place of health services and applying for permits. Reduction of movement has particularly affected women and children; indeed, 68% of children and 79% of women have reduced their movement. The implications of these coping mechanisms are still unclear, although likely unsustainable in the long-term and detrimental to individual, familial/societal relationships and general well-being.
e) Preventing Displacement Needs and requirements for staying in the current place of residence derive special importance from the fact that those who remain and try to cope with the new reality created by the Wall appear to be predominantly from among the poorer sectors of society. The high level of demand to provide more services, infrastructure, social security and suitable jobs among Palestinians  is an important finding in this context.

Unlike in the case of refugees, no single UN agency is mandated to assist and protect internally displaced persons. Instead, a “Collaborative Response” has been devised which allows for a coordinated response to IDP situations by all relevant UN Agencies (i.e. OHCHR, OCHA, WFP, WHO, UNICEF, etc.). (See “International Mechanism to Situations of Internal Displacement, Applicability to the Palestinian Case”).
The Deng Principles reiterate principles well-known in international law, namely the duty of competent authorities, either the national authorities or the international community, to “...allow internally displaced persons to return voluntarily”(7). The Principles consider reparation as core to the rights of internally displaced persons, and remind of “...the duty and responsibility to assist returned and/or resettled internally displaced persons to recover, to the extent possible, their property and possessions which they left behind or were dispossessed of upon their displacement.”(8) The duties of the international community regarding the Wall and its regime were also explicitly affirmed  by the International Court of Justice. The Court called upon states “... not to render aid or assistance
in maintaining the situation created by such construction.”(9) It finally requested the General Assembly and the Security Council to “…consider what further action is required to bring to an end the illegal situation…”(10) Hence, States have an obligation to provide protection to Palestinians affected by the Wall, including preventing their displacement, facilitating their return and reparation and ultimately, bring an end to the illegal situation.

The pilot study highlights  the need to address one of the root causes of the  conflict, namely, Israel’s policy of forced population
transfer through occupation and colonization.

The pilot study highlights the need to address one of the root causes of the conflict, namely, Israel’s policy of forced population transfer through occupation and colonization. The study also calls upon the international community to develop an effective and genuine protection mechanism for Palestinians and address the effects of the conflict on the rights of the Palestinian people, particularly on their right to return and self-determination.
Source
(1) Excerpts taken from the BADIL/IDMC, Displaced by the Wall, Pilot Study on Forced Displacement as a
Result of the Wall and its Associated Regime, Bethlehem: Badil Resource Center and the Internal Displacement
Monitoring Center, September 2006. The full study is available at: http://www.badil.org/Wall-Report.pdf
(2) [Emphasis added] International Court of Justice (ICJ), The Legal Consequences of the Construction of a Wall
in the Occupied Palestinian Territory, Advisory Opinion, 9 July 2004, para. 133.
(3) [Emphasis added] Guiding Principles on Internal Displacement (Deng Principles), (11 February 1998),
Principle 6.
(4) International Criminal Court (ICC), Rome Statute of the International Criminal Court, A/CONF.183/9 (17
July 1998, as corrected in 10 November 1998 and 12 July 1999), Article 7 (2)(d).
(5) Ibid. Article 8(b).
(6) Based on the overall Jerusalem Governorate population of 407,090 in mid-2006, 23,170 persons have thus
already been displaced as a result of the Wall and its regime. According to OCHA, the number of Palestinians
with Jerusalem ID residing on the East side of the Wall is around 55,000 persons. See Office for the Coordination
of Humanitarian Affairs (OCHA), Preliminary Analysis of the Humanitarian Implications of the April 2006
Barrier Projections, update 5 (Jerusalem: OCHA, July 2006), p. 2.
(7) Deng Principles. Principle 28.
(8) Ibid. Principle 29.
(9) ICJ, Legal Consequences of the Construction of a Wall in the Occupied Palestinian Territory, supra 2, para 159.
(10)[Emphasis added] Ibid, para 163 (3)(E).