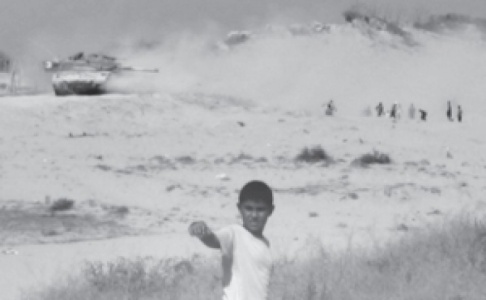 “Israel has turned the Gaza Strip into a prison for Palestinians and have thrown away the key...life in Gaza has turned  to be intolerable, appalling and tragic. Israel violates international law as expounded by the Security Council and the International Court of Justice and goes unpunished.... In other  countries this process might be described as ethnic cleansing.”(1)
- John Dugard, Special Rapporteur on the Situation of Human Rights in the Palestinian Territories Occupied Since 1967.

According to the Israeli Defense  Force (IDF) website, the IDF “will
continue to operate in all available  ways to help establish conditions leading to the safe return of the kidnapped soldier, Corporal Gilad Shalit, and to bring an end to terror  attacks and rocket fire  against the citizens of the State  of Israel.” Senior security analyst  Alex Fishman reported that the  army had been preparing for  an attack for months, with the goal of destroying the Hamas  government.(2)
Israel Refuses UN Mission to the OPT On 6 July 2006, the Human Rights Council passed resolution S-1/Res entitled “Human rights situation in the Occupied Palestinian Territory”  in its First Special Session. The resolution urged “to dispatch an urgent fact-finding mission headed by the Special Rapporteur.” John Dugard then submitted a memorandum of the proposed mission for the approval of the Israeli Government. Israel however, never responded to the request of the President of the Human Rights Council and the mission never took place.(3)

Civilian Casualties
The daily killing of Palestinians in Gaza according to the Palestinian Center for Human Rights (PCHR) from the months of June 25 until
October 18 alone have mounted to 333 Palestinians, including 71 children, and approximately 935 injured and maimed. Since the beginning of the second Intifada at least 2,300 Gazans have been killed.

Internally Displaced
The UN Office for the Coordination of Humanitarian Affairs (OCHA) estimates that the military operation in the Gaza Strip in June-July 2006 has created at least 5,100 internally displaced persons(4) of which 3,400 were sheltered at UNRWA schools in Rafah and Jabalia.(5)

Economic-Humanitarian Disaster
The poverty level in the Gaza Strip is 75%.(6) Humanitarian organizations have an obligation to continue to transport aid despite the restrictions of access to the Gaza Strip. Severely adding to the economic crisis is the total ban on fishing imposed by Israel on 25 June, which have emptied fish markets. At least 35,000 people reliant on the industry are suffering a devastating loss of income. The fishing industry was already in a steep decline before the invasion due to restrictions placed by Israel on Palestinian fishermen, and pollution.

Palestinian IDPs
14 Summer 2006 Freedom of Movement All entry and exit points to Gaza have been virtually sealed by Israel since June 25. Air strikes from the Israeli army destroyed the bridges  that connect the north, central and southern sections of the Strip.

Health
According to WHO, UNRWA and the Ministry of Health, they are facing increasing difficulties in meeting the food needs of the population who, prior to June 28, depended heavily on fishing for protein intake. According to the UN, between 45% and 60% of the population of the Gaza Strip is food insecure.(7) Additionally, hundreds of chronically ill patients, including cancer and heart patients requiring essential life-saving medical treatment unavailable in Gaza, have been unable to travel. The Israeli army has attacked the new emergency hospital in Beit Hanoun while elsewhere generators are being used as a result of the destruction of the power plant. Essential drugs are also in short supply.

Destruction of Essential Civilian Utilities
On 28 June the destruction of the main power plant transformers left around 700,000 Gazans (50% of the population) without electricity. They now have an average of between 6-8 hours of electricity per day. On 19 July, the Israeli army bombed power transformers in the el-Maghazi refugee camp, cutting off power to the whole of the central Gaza Strip. The water distribution dependent on the electrical supply has led to  a water shortage across Gaza, with urban areas receiving as little as two to three hours of water supply per day. The effects of not having electricity include: no sewage, no lights, no refrigeration, no food, no cooking, no radio, no internet, no gasoline, and no work. The military operation has also led to the destruction of thousands of hectares of agricultural land containing almond, olive and citrus trees, hundreds of shelters(9) and several dozen Palestinian structures including governmental buildings and shops.

Sonic Booms
The entire population is terrorized by Israeli war planes, which fly at low altitudes above the civilian population and break the sound barrier.
The “booms” traumatize children(10) and cause infrastructural damage. In November 2005, the petition filed by Physicians for Human Rights  and the Gaza Community Mental Health Programme reported an increase in miscarriages and heart problems from sonic booms. The Special Rapporteur to the OPT, John Dugard, wrote “if terrorism has any meaning, then it is surely this.”(11) During the present operation, “the air force has caused three or four sonic-boom sorties a night.”(12)