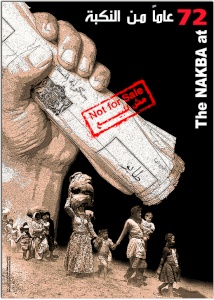 For the 72nd commemoration of the Ongoing Nakba, BADIL completed numerous radio and TV interviews, produced three video spots, published its annual Ongoing Nakba statement, in addition to updating the Q&A brochure and organizing seven  community initiatives and resilience activities to challenge Israel policies and practices that sustain the Ongoing Nakba under the slogan, “One People, One Destiny: United for Return and against the Deal of the Century”.

The Q&A brochure, entitled “What you need to know about Palestinian Refugees and Internally Displaced Persons (IDPs),” was updated in March 2020 and provides answers to the most common questions concerning the Ongoing Nakba and the plight of Palestinian refugees and IDPs. The term Nakba (Arabic for ‘catastrophe’), designates the first wave of massive population transfer undertaken by the Zionist movement and Israel, in the period between November 1947 (UN Palestine Partition Plan) and the ceasefire (Armistice) agreements with Arab states in 1949. The Nakba was an act of forced population transfer (or ethnic cleansing) undertaken for the purpose of establishing Israel, which would ensure permanent dominance of Israeli-Jewish colonizers over the indigenous Palestinian population. More than 750,000 Palestinians were forcibly displaced from their homes and lands during the Nakba and were also prevented from returning. One fundamental truth is that the Nakba is ongoing; in other words, the Nakba is not isolated explicitly to these historic events but is an ongoing phenomenon that was initiated well before that period. As such, the Ongoing Nakba is terminology adopted and promoted by BADIL to describe this phenomenon that began as early as the occupation by the British in 1917 and continues to this day. This reality is achieved by a vicious cycle of ongoing displacement and simultaneous prevention of return.

BADIL participated in a radio interview with Philistia,  a community youth radio station, focusing on the current situation in Palestine, the Ongoing Nakba and the so-called deal of the century. The panel included six Palestinian experts from Mandatory Palestine, Lebanon and Europe.  In addition, BADIL was invited to speak about the Ongoing Nakba on Radio Baladna, Al Quds Educational TV and Palestine Live Channel. All the channels are local and the interviews were conducted in Arabic.

-        In One Minute: Statistics of Palestinian Refugees and Internally Displaced Persons After 72 Years of Ongoing Nakba

-        Why S  hould We Return? (Palestinian youth perspectives on return)

To see more of BADIL productions go to our vimeo page. For research, see here.
Share