BADIL Resource Center for Residency and Refugee Rights has issued its latest publication, entitled Denial of Palestinian Use and Access to Land: Summary of Israeli Law and Policies.

Drawing on the extensive research undertaken by BADIL for its Forcible Transfer series, especially its two Working Papers on Denial of Access to Natural Resources and Services (2017) and on Land Confiscation and Denial of Use (2017), but also using the legal analysis presented in BADIL’s Handbook on Israeli Land Grab and Transfer of Palestinians (2013), this new paper offers an overview of the different law and policies enacted by Israel to acquire the maximum amount of land with the minimum number of Palestinians. Thus, the forcible displacement of the Palestinian people is not an end in and of itself, but rather, it is utilized by the Israeli regime to further its Zionist colonial enterprise. 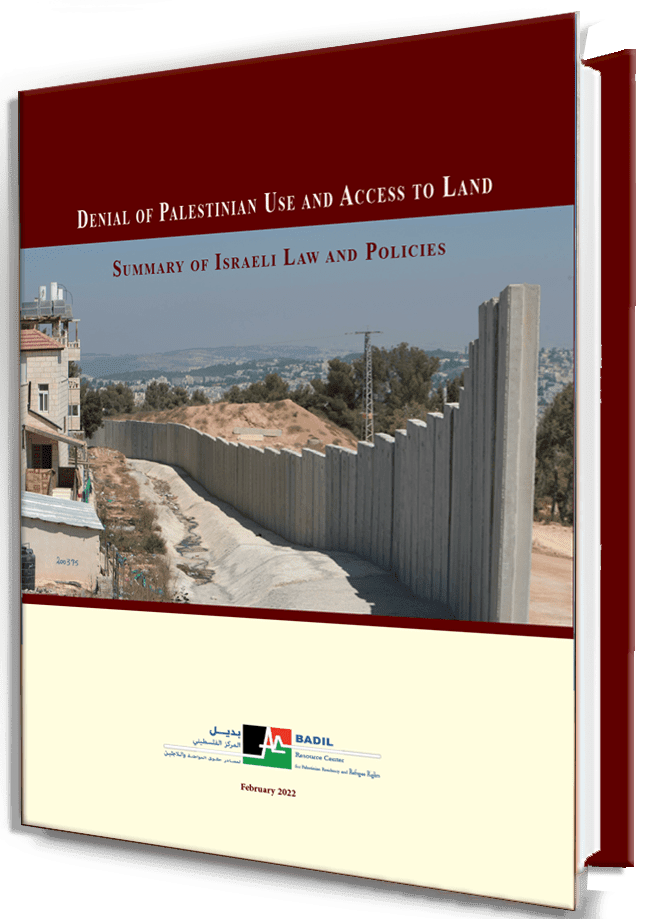 Regardless of where it is implemented, Israel’s strategy follows a similar pattern, which is evidence of its intent to confiscate lands and push Palestinians out wherever they may be. Therefore, this paper is divided into three chapters, all following the same outline: first, (A) the land is confiscated by force, then (B) specific legislation, either in the form of discriminatory laws or military orders, is enacted to “legalize” land theft and further it. Finally, (C) restrictions on use and access are imposed, but only on Palestinian owners, to prevent them from reaching the land that remains.

Part I analyzes such laws and policies in the territory confiscated between 1947 and 1949 (Part I: Palestine 1948) while Part II discusses the application of these tactics in the territory it occupies since 1967 (Part II: West Bank 1967) and finally, Part III details the implementation of this same strategy in the territory Israel has annexed (Part III: Jerusalem).

As a result of these different laws and policies, the map of Mandatory Palestine has drastically changed to prevent the establishment of an independent and viable Palestinian state. Israel’s intent to create and maintain a system of oppression and domination over the Palestinian people is clearly an historic, yet ongoing process, achieved through territorial fragmentation, dispossession of land and property, and denial of economic and social rights.

Despite numerous UN Security Council resolutions and the existence of legal remedies and actions, the international community’s inaction has enabled Israel to continue dispossess, segregate, control and oppress Palestinians. Practical measures must be taken to bring Israel accountable for its forcible transfer policies and the violations they entail, as well as to ensure reparations for the Palestinian people, including return, property restitution and compensation.