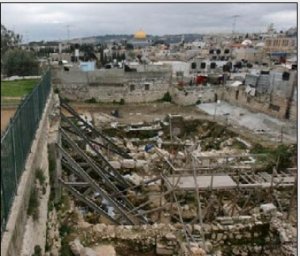 Between the Israeli State and a Jewish-Only Settlement on the North East Corner of the Old City
Burj al-Luq Luq is one of the neighborhoods of the Hutta quarter of the old city of Jerusalem. This neighborhood sits on one of the highest point within the walled city, where the north and eastern walls meet. The neighborhood's name translates into English as, "The Tower of the Stork" as musters of storks would rest on this Old City hilltop as they migrated across the city.

The 10,000 Palestinians living in the Hutta quarter suffer very high population density, poverty, very high drop-out rates, lack of employment opportunities, proliferation of drugs within the community, systematic harassment from Israeli settlers and soldiers, and the neighborhood is a target of Jewish-Israeli settler activity.