Peace Talks in the Shadow of Demolitions BADIL Statement on the Occasion of World Refugee Day and Release of: “Rights in Principle – Rights in Practice”

20 June 2010 – In 1947 as members of the newly-created United Nations engaged in vigorous debate about the future of Palestine, Arab diplomats who played an instrumental role in the development of Universal Declaration of Human Rights and the Convention relating to the Status of Refugees reminded their colleagues that the problem of Palestine was not a matter of ‘what to do with Palestine’, but rather, ‘a lack of regard for certain principles of international relations and human life, including the principle of self-determination, the principle of the right to live peacefully in one’s own home, and the principle of self-government in a democratic way’. Given the divergence of opinion about the best way forward in what would be the international organization’s first attempt to resolve a major issue of international peace and security, they suggested that the UN General Assembly obtain legal counsel from the International Court of Justice. A majority of members nevertheless rejected the efficacy of this approach.1 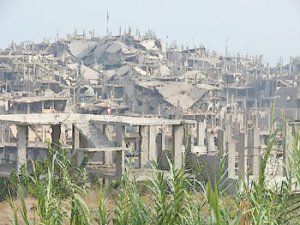 From the BADIL Refugee Survey 2008-2009: Secondary Forced Displacement in Host Countries - An Overview

Many Palestinians who sought refuge outside their homeland experienced further forced displacement. With their right to a nationality, identity and travel document denied by Israel, they became stateless refugees[1] who have been particularly vulnerable to the impacts of armed conflicts and human rights violations in their respective host countries.


In the 1950s, Arab Gulf oil-producing states expelled striking Palestinian workers. When factions within the PLO challenged the power of the Hashemite Kingdom in 1970, vast numbers of Palestinians were expelled (between 18,000 and 20,000) and their camps demolished. This war, known as “Black September”, also resulted in the expulsion of the PLO from Jordan and its relocation to Lebanon.

Joint submission to HRC: Distressing Lack of Accountability and Justice for the Victims of the Conflict

European BDS Organizations Campaigning to” Give Israel the Red Card”
7 October 2009 – 18 European organizations involved in the BDS campaign launched an effort calling on FIFA to live up to the letter and the spirit of its statutes and to seize this opportunity to prove to the world that it stands for a more just world by sending Israel an unmistakable threat of exclusion. This would be an important victory for human rights -- not only for the Palestinian people, but also for the international football community.

Advocating Palestine in the United Nations

Follow-up on the Goldstone Report, UN, New York - in November 2009, the UN General Assembly had endorsed the report of the Fact Finding Mission on the Gaza Conflict (“Goldstone Report”) and called upon the Israeli and the Palestinian sides to conduct investigations into the serious violations of international human rights and humanitarian law in line with the Goldstone recommendations. Since then, Israel has not implemented investigations in conformity with international standards, and the Palestinian authorities have equally failed to comply with the requirements of the UN. In February 2010, three of the six months alloted to the domestic investigations had lapsed and an initial assessment was due by the UN Secretary-General. The latter, however, failed to assess the measures carried out by the parties of the conflict, and the General Assembly decided to extended the period for the investigations at the domestic level for another five (instead of the initial three) months.1 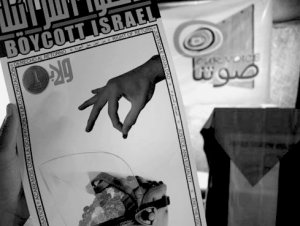 18 Nov 2009
Nakba Education on the Path of Return (Issue No.42, Autumn 2009)
French activists protest Paris air show
20 June 2009 - A group of French activists from the French BDS campaign held a non- violent protest against Israeli participation in the Paris - Le Bourget Air Show. Le Bourget Air Show is one of the largest weapons and aerospace technology fairs in the world. The protest took place outside the Israeli pavilion, where several Israeli arms companies had come to sell their military technologies to potential European buyers, while French president Nicolas Sarkozy was visiting the air show. Despite forced removals by police, the BDS activists were highly visible, and distributed several thousand informational leaflets to the public.
Read more...

18 Nov 2009
Nakba Education on the Path of Return (Issue No.42, Autumn 2009)
We are from there...We are Alive and Will Continue to Live... and the Dream Lives On
Bethlehem, Palestine, 13 October 2009 – The Badil Resource Center for Palestinian Residency and Refugee Rights has announced the launch of the 2010 Annual Al-Awda Awards competition, now in its fourth consecutive year. The Award is an initiative of Badil which aims to provide a platform for the use of creative expression to promote Palestinian cultural identity and Palestinian refugee rights, foremost among them the right to return.
Read more...

Palestinian Officials in Geneva: Sacrificing the Rights of Palestinians at the Altar of False Promises

Badil Statement, 2 October 2009 – The recommendations of the UN fact finding mission to the Gaza Strip headed by Judge Richard Goldstone represented a golden opportunity for the Human Rights Council, the Security Council, the General Assembly, and all member states – particularly the United States and the European Union – to exercise their moral and legal obligations to hold Israel accountable for its crimes committed during its 2008-2009 war against Gaza. Yet the official Palestinian position calling for the postponement of the vote to endorse the report's recommendations now hamstrings these opportunities. In so doing, it has undermined the principle of international legitimacy as a basis to resolve the Palestinian issue and prevents the Palestinian victims of this assault from achieving redress.