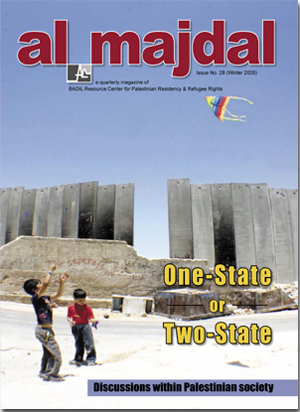 The editorial of the most recent issue of al Majdal states that while facts on the ground inform solutions, principles of equality, freedom and justice should be primary considerations as these principles form a basis for self-determination and a durable solution. Many of the articles included in this issue of al Majdal are translated from BADIL's Arabic language publication, Haq al Awda, and reflect current Palestinian positions regarding one-state and two-state solutions, whether any of the two is viable and which is preferable.

General articles on Palestinian refugees include a discussion of UNRWA agency reforms and UNRWA development project in a Syrian refugee camp. A photo montage of the newly installed 'terminal' which has replaced a checkpoint in the wall between Bethlehem and Jerusalem compliments the theme articles' discussion of current facts on the ground. Also included in the general articles is a discussion of Israel's attempts to not be held legally culpable for its actions and an update of Boycott-Divestment-Sanctions campaigns against Israel.

As all of the discussion and reports taking place in the context of a post-Sharon leadership, included in this issue of al Majdal is a reflection upon what Sharon's presence, before and during his tenure as Prime Minister, meant to Palestinians.

The One-State versus Two-State Debate Featured

Discussions from within Debate amongst Palestinian activists and intellectuals as to whether a Palestinian state is still viable, whether it is the best option to ensure justice and address the effects of ethnic cleansing and what other options might exist, plays a determinative role in the strategy Palestinians will adopt in the future.

This issue of al-Majdal features articles first published in BADIL’s Arabic language magazine Haq al-Awda. The articles reflect current Palestinian positions and debate regarding a one-state and two-state solution: whether any of the two is still possible and which is preferable. A recurring concern among the authors is how to develop a strategy that addresses self-determination for all Palestinians, including Palestinian refugees and internally displacees, and challenges the Israeli imposed solution,

which prevents both the formation of two viable states and the creation of one state for all its citizens. Sharon’s legacy Ariel Sharon has been in a coma since suffering a serious stroke on 5 January 2006. However, Sharon’s physical presence in Israeli leadership is not critical to the unfolding unilateral disengagement plan. Subduing the enemy by any means, Sharon’s infamous conception of a peace process, survives and gives rise to continued ethnic cleansing, racism and discrimination, destruction of property, missiles, torture, the Wall and enclaves, colonization, and apartheid. It must be recalled that subduing the enemy is the logic of war:

The Cantons-State and the Liquidation of the Refugee Issue

When I thought about how to write to your magazine entitled “The one-state and the two-state solution and the rights of the Palestinian refugees”, I realized that this topic would not be complete unless the option of the cantons-state was tackled. This because the intended Palestinian state is a partial one, with temporary borders and on less than 50% of the land occupied in 1967.

Between the One-State and the Two-State Solution

Independence is Not a Luxury, it is a Necessity

At times, the tragic choices to be made in the context of and the political dilemmas posed by the struggle for the freedom and rights of the Palestinian people generate ideas, conferences and initiatives which run against a just peace and block the light at the end of the tunnel. These ideas are based on exaggeration and are advanced by despairing and lazy intellectuals who prefer the comfortable studio and the lights of TV cameras over the hard work required by real political struggle.

It is no longer disputed, at least by those close to the ‘facts on the ground’, that Israel’s West Bank settlements have expanded to the point of eliminating the contiguous territory necessary to establishing a viable Palestinian state. On this understanding, even the Bush administration’s ‘road map’ assumes that substantial withdrawal of these settlements is necessary to a viable two-state solution.

The Palestine Right of Return Coalition held its 6th annual meeting in the city of Vlaardingen, Netherlands on 23-27 November 2005. The Dutch InterChurch Organization for Development Cooperation (ICCO) and the al-Awda Palestine Network - Netherlands jointly hosted the meeting. The meeting took place in the shadow of numerous major regional and international developments that impact the struggle of the Palestinian people to achieve their national rights.

Governance and Respect of Palestinian Rights

Hamas is now challenged with finding ways to respond to the legacy and the multi-facetted public expectations of its victory and new leadership role. The Palestinian vote has correctly been described as a political earthquake or tsunami that poses deep challenges to the Palestinian body politique, including the secular forces of the Palestinian left. The ball, however, is in the court of the international community – diplomats, governments, and civil society - who will have to show whether they are able and willing to hear and engage based on the message of Palestinian voters in the occupied Palestinian territories (OPT).

In 2005 the Occupied Palestine and Syrian Golan Heights Advocacy Initiative (OPGAI) presented a call for boycott, divestment and sanctions (BDS) against Israel to the 5th World Social Forum in Porto Alegre, Brazil. The Palestinian Campaign for the Academic and Cultural Boycott of Israel (PACBI) worked closely with the British Committee for Universities of Palestine (BRICUP) which lobbied the Association of University Teachers (AUT) to adopt an academic boycott of Israeli universities. Despite the fact that the initial AUT boycott was reversed due to enormous pressure from the Zionist lobby in the UK and beyond, it proved that an academic boycott is attainable. (www.pacbi.org).