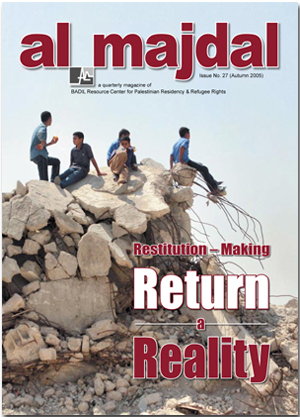 When Palestinian refugees and internally displaced talk about the right of return they speak about return to a specific place – a village, a piece of land and a home. No one really knows how many refugees would choose to return if given the chance to do so. There are simply too many factors to consider. But like refugees from Guatemala, Bosnia, Kosovo and elsewhere, displaced Palestinians that wish to return to homes, lands and properties should be allowed to do so. Palestine is one of the most well-documented areas of the world. What makes the Atlas of Palestine unique?

Any Atlas is a graphic representation of data. Unless you are an explorer charting new territory, all atlases are based on existing data. In this sense, the Atlas of Palestine 1948 is not unique. But it is the firsttimethat such massive data on Palestine was assembled in one volume. That is in addition to the analysis of results. Let us not forget that compilation of all this data has a historical-political meaning.

‘Nothing New to Report’: The Registry of Damage Resulting from the Construction of the Wall

Israel is obliged to make reparation for damage caused to all natural or legal persons harmed by the construction of the Wall in the West Bank, including in and around eastern Jerusalem. This was one of the primary conclusions of the July 2004 Advisory Opinion of the International Court of Justice (ICJ) on the legal consequences of Israel’s construction of a Wall in the 1967 occupied Palestinian territories.

Israel has dismantled all of its colonies and redeployed Israeli military forces from the Gaza Strip, but it still controls the land borders, coastal waters, and airspace over Gaza as well as the construction of essential infrastructure (e.g., sea and air ports). The Strip thus remains occupied. Several colonies in the northern West Bank were also evacuated. For the first time Palestinians are confronted with having to deal with restitution of land expropriated to build Jewish colonies in the OPTs in contravention of international law.

In this working paper, refugee law expert Michael Kagan develops the idea of conflicting rights as a means of addressing Israeli objections to Palestinian refugee return. Rather than explore Palestinian arguments for the right of return, this paper starts from the assumption that the right of return exists and must be accepted by Israel in order to reach a just peace that complies with international law.

Since 1995 Jewish organizations have been leading an aggressive restitution campaign to reclaim dormant assets belonging to Jewish victims of the Nazi regime in Europe. In 1997 the same issue was raised in Israel but it has not been pursued with similar ferocity nor success.

Taking Restitution Claims to the European Court of Human Rights

In November 2004 BADIL Resource Center organized a study tour of Cyprus for Palestinian refugee activists (See Majdal 24, December 2004). During the visit participants met with Ms. Titina Loizidou, a tour guide and displaced person from the northern Cyprus port town of Kyrenia. After the division of the island in 1974 Ms. Loizidou became active in a movement called ‘Women Walk Home’ which held regular demonstrations calling for a united Cyprus, return home and human rights for all.

Principles on Housing and Property Restitution for Refugees and Displaced Persons, United Nations Sub-Commission on the Promotion and Protection of Human Rights

The NGO Statement on International Protection was drafted and delivered at the 56th Session of the Executive Committee of the High Commissioner’s Programme on 3-7 October 2005 on behalf of a wide range of NGOs.

After 57 years, the State of Israel is thinking about coming up with a comprehensive immigration policy.

The emergence of immigration reform on the political agenda this summer took some by surprise because Israel’s migration policies have always been clear on two points. First, Israel refuses to let the Palestinian refugees that it expelled return to their homes. Second, Israel encourages Jews of all nationalities to become Israeli citizens through its Law of Return. This basic arrangement – an open door to Jews, and a closed door to nearly everyone else – is not likely to change soon.

The Forgotten: The Case of Non-ID Palestinians in Lebanon

The situation of non-ID Palestinian refugees in Lebanon has recently been the subject of increased attention. The plight of several hundred thousand Palestinian refugees in Lebanon is one of the most critical in the region. Among these refugees, some have not been identified,i.e.,non-ID refugees: they are not registered with UNWRA or the Lebanese authorities. Non-ID refugees are considered illegal aliens and live in a legal limbo. They are deprived of basic legal protection and access to UNRWA services.

In early 2005 the Lebanese Ministry of Labor tabled a memorandum concerning an amendment to Lebanon’s labor law affecting Palestinian refugees. Annexed to the memorandum was the text of the current law, the proposed bill, analysis of the amendment vis-a-vis international and Arab conventions to which Lebanon is a signatory, and the reasons for the change.

Who is Monitoring Palestinian IDPs in the Occupied West Bank?

Everyone knows that the Wall Israel is constructing in the West Bank is causing damage; land is being annexed, the ecosystem is destabilized, a strict permit system is imposed in the closed military zones, houses are destroyed, businesses are closed etc... but, what does this really entail? How are the Palestinian people coping? They are forced to move.

43 Hours In Sabra and Shatila

On the 23rd anniversary of the massacre of Sabra and Shatila criminals who committed the massacre and those who supported, armed, protected and brought them in to the area, yet later were able to claim before the world that they “never saw or heard or witnessed any thing”, have yet to face trial.