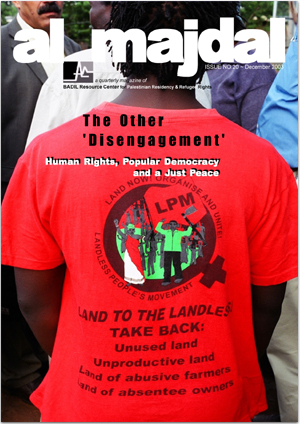 The flurry of activity among diplomats and political figures over the past few months masks a further disengagement from human rights and public participation in peacemaking, says the latest issue of BADIL's quarterly magazine Al-Majdal.

Al-Majdal's editorial "The Other 'Disengagement'-Human Rights, Popular Democracy and a Just Peace" points out that these elements are critical for a just and durable peace but are missing from recent proposals. If such efforts are pursued, neither Palestinians nor Israelis will have the kind of long-term solution they deserve.

This issue also reports on a meeting at BADIL with a Jewish Israeli organization working on Palestinian-Israeli reconciliation; the 4th annual Right of Return conference in London; a BADIL-sponsored tour of Palestinian refugee to study land restitution and public participation in peacemaking in South Africa; and BADIL's expert forum on housing and property restitution for Palestinian refugees.

Refugee protection issues covered include an update on Palestinians from Iraq, housing demolition in Rafah, and the impact of Israel's "Apartheid Wall" on registered refugees. This issue also looks UNRWA's difficulties in raising money for its emergency programs and its work in rebuilding Jenin camp (West Bank) and rehabilitating housing in Neirab camp (Syria.(In addition, the new Al-Majdal issue presents guest authors Jaber Suleiman on the Burj al-Shemali Massacre and Omar Barghouti on the obstacle to a secular democratic solution for the Palestinian-Israeli conflict.

In November 2003 organized a fact finding mission to South Africa that aimed to provide an opportunity for Palestinian refugee activists to learn more about the process of land restitution and public participation in peacemaking. A first mission visited Bosnia-Herzegovina in June 2002. BADIL staff member Nihad Boqai and refugee activist and researcher Mahmoud Issa (Denmark) report on the trip.

Fifteen Years after the June 1982 War: Testimonies on the Battle of Burj al-Shamali Refugee Camp and Israel's Massacres and Air Raids (excerpts)

In Burj ash-Shamali refugee camp in Lebanon, there is a small area reserved for collective memory. In the eastern side of the camp, the ruins of al-Hulah Club and its shelter, site of the Israeli Air Force’s horrific massacre, still remain.

The shelter has become a collective tomb. The residential areas around the site have now expanded, and with the exception of a few square meters on which a very modest memorial monument has been erected, houses today take up much of the area and its surroundings. Shaded beneath a majestic cedar, several layers of cement blocks make up this memorial, which carries no engravings or testimonials.

Conquest may be fraught with evil or with good for mankind, according to the comparative worth of the conquering and conquered peoples.’(1) Theodore Roosevelt From the scandalous Nusseibeh-Ayalon agreement to the irreparably flawed Geneva Accords, the last true Zionists -- with the crucial help of acquiescent Palestinian officials -- have tried their best to resuscitate the two-state solution with the declared intention of saving Zionism. But it is arguably too little, too late.

The Survey includes 6 chapters covering the historical circumstances of Palestinian displacement, population, legal status, socio-economic profile, international protection and assistance, and durable solutions. The Survey will be published annually by BADIL Resource Center. Available in English and Arabic. 200 pages. ISSN 1728-1679.
For orders contact, This email address is being protected from spambots. You need JavaScript enabled to view it.