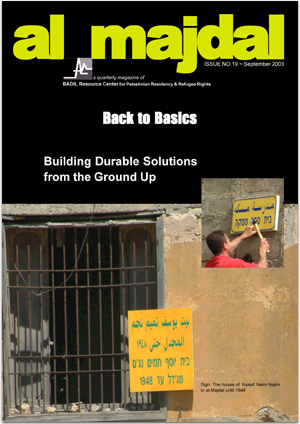 The history of the past 50 years is littered with failed Middle East peace plans. The last 10 years alone has seen Oslo, the “road map” and now Geneva. Why do they fail? The latest issue of BADIL’s quarterly magazine Al-Majdal says the plans make no reference to four essential components: best practice in successful peace plans elsewhere, past experience of why plans collapsed or succeeded, the rule of law and community participation.

Al-Majdal’s editorial “Back to Basics” calls for building durable solutions to the Palestinian refugee issue from the ground up. A following article reports on the relaunch of inter-generational grassroots initiatives in the West Bank to strengthen the voice of refugees against pressures to surrender their rights.

These days, Palestinian refugees are continually polled and studied. Al-Majdal reports on a poll asking them what they want in terms of the right of return. The magazine concludes that the polling organization didn’t ask the right questions. But a University of Geneva report on Palestinian perceptions of their living conditions provides a useful look at the socioeconomic dimension of the refugee question, says Al-Majdal.

The issue also looks at a positive Jewish-Israeli initiative on Palestinian-Israeli reconciliation. Conversely it analyzes the new Israeli law on family reunification that bans reunification for Palestinians from the Occupied Territories married to Israeli citizens and the Israeli court decision denying Palestinians living in Israel the right to return to their village Iqrit near the Lebanese border which they were ordered to evacuate in 1948 with the assurance of return within 15 days.

Al Majdal reports on the unprotected Palestinians of Egypt; evicted refugees in Iraq; relocation to Gaza of 4,500 Palestinians who were stranded in Egypt after the Egypt-Israel peace agreement and UNRWA which the magazine says is under attack and under-funded. Regular features include Refugee Voices, dedicated this issue to Edward Said; In Memoriam, Palestinians killed by the Israeli military 1 June to 27 September; and Documents, recommendations of conferences in Ramallah and Tulkarem. 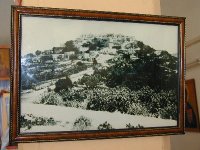 On 24 September 2003 Belgium’s Supreme Court ordered the cessation of all cases filed concerning the 1982 massacre in the Sabra and Shatila refugee camps in Beirut. The decision came as a result of a recent legislative modification to Belgium’s Universal Jurisdiction law. The new law effectively suppressed Belgium’s universal jurisdiction law under considerable press from the US government.

BADIL: We have been following a series of brave and very creative Zochrot activities over the past year-and-a-half or so and also reported about them in al-Majdal: Israelis commemorating the Deir Yassin massacre, linking protest against current demolitions of Palestinian homes in Lod (Lydda) with the Nakba of 1948, visiting 1948 depopulated Palestinian villages like Ain al-Ghazzal and Isdud and participating in Palestinian events organized to commemorate the Nakba and to call for Palestinian refugees' right of return.

Right of Return - The Ever-present Fear, The Iqrit Model

Between 1948 and 2003 the Palestinian inhabitants of the depopulated village of Iqrit have issued four petitions to the Supreme Court, sitting as a High Court of Justice. The central tenet of all the decisions was far removed from the legal arguments – it was the fear of a precedent for the right of return.

In June 2003 the Council of Europe (CoE), an intergovernmental body comprised of members of individual European parliaments, issued a number of recommendations concerning international protection and durable solutions for Palestinian refugees. The recommendations were issued in the aftermath of a hearing on the status of Palestinian refugees in Europe held earlier in the year in Budapest and a special report prepared by the Council's Committee on Migration, Refugees and Demography (Doc. 9808, 15 May 2003) on the conditions in which the Palestinian refugees stay irrespective of the place.

The following analysis of Israel’s new law is excerpted from Adalah's submission to the UN Human Rights Committee in July 2003.

According to Adalah, “the introduction of this racist and discriminatory ban on family unification shows the increasing deterioration in the political situation in Israel. It is one of the most extreme measures in a series of governmental acti ons aimed at undermining the rights of Palestinian citizens of Israel as well as Palestinians from the Occupied Territories.”

UNRWA - Under Attack and Under Funded

At a time when the services of UNRWA are most in need, the Agency has found itself both under attack and its emergency operations in 1967 occupied Palestine under funded.

The right of refugees and displaced persons to return to their homes of origin is well established in international law. Today, most peace agreements that provide solutions for refugees and displaced persons recognize the right of such individuals to return to their homes. This includes agreements in Macedonia, Kosovo, Croatia, Bosnia-Herzegovina, Tajikistan, Georgia, Burundi, Rwanda, Liberia, Sierra Leone, Mozambique, Cambodia, and Guatemala.

Survey of Palestinian Refugees and Internally Displaced Palestinians 2002
This new publication by BADIL provides basic historical and current information on Palestinian refugees and internally displaced persons. The Survey includes 6 chapters covering the historical circumstances of Palestinian displacement, population, legal status, socio-economic profile, international protection and assistance, and durable solutions. The Survey will be published annually by BADIL Resource Center. Available in English and Arabic. 200 pages. ISSN 1728-1679.
For orders contact, This email address is being protected from spambots. You need JavaScript enabled to view it.