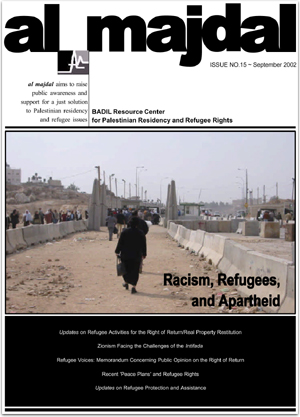 Over the past year, the Israeli government has responded to Palestinian demands for an end to the occupation, equality inside Israel, self determination and implementation of the right of return of refugees with increasingly overt forms of racial discrimination, ongoing displacement and attacks on Palestinian refugees. Al-MAJDAL no. 15 examines these new Israeli measures, which bolster forced segregation and raise serious questions about the feasibility of a two-state solution, and analyses them as part of an emerging Israeli apartheid regime over all of historic Palestine (Israel and the 1967 occupied Palestinian territories). 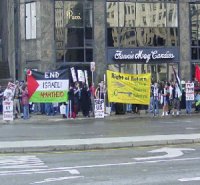 September 2002 marked the first anniversary of the launching of a global campaign to end Israel's brand of apartheid. The campaign was inaugurated in Durban, South Africa at the 2001 World Conference against Racism (WCAR). September 2002 also marked the second anniversary of the second Palestinian uprising - al-Aqsa intifada in the 1967 occupied Palestinian territories. Over the past year, the Israeli government has responded to Palestinian demands for an end to the occupation, equality inside Israel, and implementation of the right of refugees to return to their homes of origin with increasingly overt forms of racial discrimination, ongoing displacement and attacks on Palestinian refugees, and new measures that bolster forced segregation and apartheid.
In the 1967 occupied Palestinian territories the Israeli government continues to advance polices and underwrite practices - including the expansion of the network of colonies (i.e., settlements), confiscation of Palestinian land, and demolition of Palestinian homes - that aim to permanently alter the demographic, ethno-national composition of the West Bank, including eastern Jerusalem, and the Gaza Strip. Freedom of movement of the Palestinian population between cities, towns and refugee camps is virtually non-existent, while freedom of movement within population centers is severely restricted by ongoing rolling curfews that keep Palestinians locked in their homes for days and weeks on end.

Israeli Jewish colonists (i.e., settlers) meanwhile, continue to move in and out of the occupied territories on the specially constructed 'bypass roads.' Palestinian civilians, moreover, have born the brunt - in lives, injuries, damage to homes and properties etc. - of Israel's military campaign to suppress the Palestinian uprising. There is no apparent distinction between civilian and combatant in Israel's selfdeclared' war on terrorism' in the occupied territories. The July  extra-judicial killing of Hamas activist Saleh Shehada, which left more than a dozenother Palestinians dead and 140 injured, including women and children, is only one example.

All Out for Palestine - Third National Al-Awda Demonstration (Chicago): On 29th September al- Awda, The Palestine Right to Return Coalition held its third National Demonstration. Participants commemorated the 2nd anniversary of the intifada and the 20th anniversary of the Sabra and Shatila massacre. A march and rally was held in downtown Chicago to draw the public's attention to the dire situation in Palestine, the plight of the Palestinian refugees, Israel's gross human rights abuses and the suffering it has inflicted over 54 years, and commemorate and honor those lost in the 1982 massacre of Sabra and Shatila in Beirut, Lebanon. For more information about the rally see the al- Awda (US) Palestine Right to Return Coalition website, http://al-awda.org.

International protection involves the direct protection of refugees' human rights on a day-to-day basis, and the search for and implementation of durable solutions. Durable solutions include repatriation, host country integration, and third country resettlement. Housing and property restitution is among the rights associated with refugee repatriation. The primary principle governing each of the three solutions is voluntariness or refugee choice. Among the three solutions, only repatriation or return is a recognised right under international law

Written by BADIL Staff
The following statement was endorsed by 80 Palestinian refugee community organizations and hundreds of individuals in the Middle East and the wider Palestinian exile in October 2002.

We Palestinians, the undersigned, reaffirm our right to return to our homes from which we were displaced in 1948, just as we have reaffirmed this right throughout the past 54 years of exile. We reaffirm that the right of return is a basic human right as set forth in international law and UN General Assembly Resolution 194.

In September 2001, one year after all international efforts at halting Israel's violent military repression of the second Palestinian
uprising in the occupied West Bank and Gaza Strip had failed, some 3,000 civil society organizations from around the world met at the third World Conference Against Racism in Durban, South Africa and approved their NGO Declaration and Program of Action.