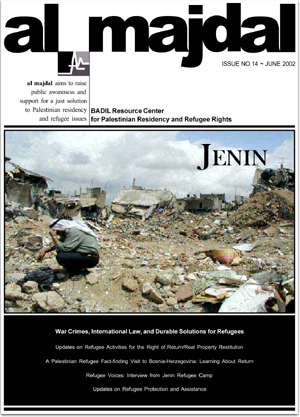 Issue No. 14 of al-Majdal covers the period of April through June 2002. It focuses on Israel’s March/April military assault and, in particular, Israel’s violation of international human rights and humanitarian law, including war crimes, in the occupied Palestinian territories. Special attention is given to the massive military assault on Jenin refugee camp. As al-Majdal notes, “The durability of any future political process between Israel and the PLO will depend, in large part, upon the willingness of the international community to uphold international law. This includes prosecution of those responsible for past and future violations and serious breaches of international law.” In addition, the issue includes a special report on a June study tour by 13 Palestinian refugee activists from the Middle East and Europe to Bosnia to investigate the process of return and housing and property restitution. 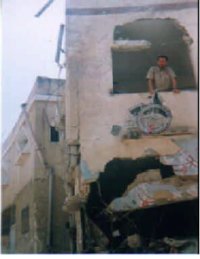 Jenin. Israel's brutal military assault on the second largest refugee camp in the Israeli occupied West Bank in April 2002 and the response of the international community symbolized in simple but fundamental terms all that is wrong with international 'peacemaking' in the Middle East. For nearly two weeks Israeli military forces relentlessly pounded Jenin refugee camp and its 14,000 residents from the air and the ground. Following the ambush of 13 Israeli soldiers in the camp on 9 April, Israel stepped up its military assault. Some 3,000 refugees, mostly women, children and the elderly fled the camp, in search of refuge in the city of Jenin and outlying villages.
Armored bulldozers indiscriminately demolished refugee shelters as military forces pushed deeper inside the refugee camp. By the time the military assault ended on 11 April it was estimated that more than 50 Palestinians had been killed. Around 10 percent of the camp, including hundreds of refugee shelters had been completely leveled. Visiting the camp shortly after the withdrawal of Israeli forces, local and international human rights organizations, including Amnesty International (AI) and Human Rights Watch (HRW), soon uncovered evidence of serious breaches of international humanitarian and human rights law, including war crimes.

This included failure to give civilians enough warning time to evacuate the camp before American-made Apache helicopters launched their first attacks; failure to protect civilians in the camp who are protected persons under the Fourth Geneva Convention; allegations of extra-judicial executions; failure to allow humanitarian assistance to refugees trapped in the camp; denial of medical assistance to wounded and deliberate targeting of ambulances; excessive use of lethal force and using civilians as 'human shields'; and, extensive damage to property with no apparent military necessity. (AI Press Release, MDE, 15/058/2002) Amid mounting international pressure, the UN Security Council adopted Resolution 1405, 19 April 2002, calling for an international investigation into the events in the camp.

The Security Council decision to investigate allegations of serious breaches of international law in Jenin and the occupied territories represented an opportunity for the international community to break with the past. Since its inception, the primary shortcoming of the Oslo process, both in content and implementation, and the reason for its collapse has been the failure to uphold human rights and humanitarian norms, including the right of refugees to return to their homes of origin. (Special Rapporteur on Human Rights in the OPT, UN Doc. E/CN.4/S-5/3, 17 October 2000) Unlike most peace agreements, including those signed between Israel and its neighbors Egypt and Jordan, the Oslo Accords stipulated that relations between Israel and the Palestinians would be conducted on the basis of an agreed upon political process rather than international law and the Charter of the United Nations.