Palestinian Refugees: Reclaiming the Right of Return (Issue No.1, Spring 1999) 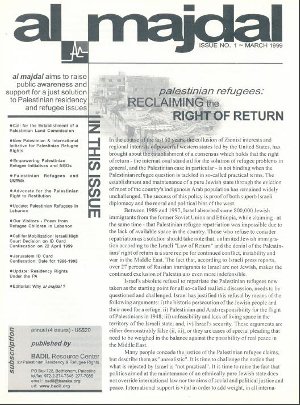 Based on contributions by Rosemary Sayigh, Salman Abu-Sitta, and BADIL Resource Center

In the course of the last 50 years, the collusion of Zionist interests and regional interests of powerful western states led by the United States, has brought about the establishment of a consensus which holds that the right of return – the international standard for the solution of refugee problems in general, and the Palestinian case in particular – is not binding when the Palestinian refugee question is tackled in so-called practical terms.

Implementation of the Right of Return of Palestinian Refugees

Israel is planning to privatize refugee land that was taken by the government and leased to Kibbutzim with many of the 49 year leases now expiring. The value of the land, about one-quarter of the area of Israel, is estimated to be between $60-80 billion. Less than 3% of the Israeli population lives on this land which is home to millions of Palestinian refugees. The privatization of this land will make the return of refugee land increasingly complicated. تحميل ومشاهدة أفلام سكس مصري و سكس عراقي و سكس يمني و سكس سعودي و سكس خليجي وكل مقاطع السكس العربي المتجدده. سكس عربي مغربي جزائري تونسي و كل فيديو جديد السكس العربي و الجنس الساخن و المثير مع احلى الفتيات العربيات

The Israel Lands Administration has drawn up plans to renovate some 55 homes and buildings in Lifta and construct 90 new housing units to convert the area into a new Orthodox settlement. The plan also includes a hotel and other facilities for tourism. The Palestinian village of Lifta had a population of nearly 3,000 in 1948. Village lands amounted to 8,743 dunums of which Palestinians owned 7,780 dunums. Jews owned 756 dunums with the remaining land classified as public. The village was attacked by Zionist forces and depopulated in early January 1948. The refugee population of Lifta at the end of 1998 totaled 18,165 persons of home 14,217 were registered with UNRWA.

No doubt, the challenges facing progressive and democratic Palestinian forces aiming to launch a new initiative for the defense of Palestinian refugee rights are tremendous. All steps set so far represent no more than a humble beginning. As the traditional political leadership represented in the PLO - including both supporters of the Oslo Accords and their opponents - remains hopelessly divided, new and much weaker Palestinian social and political forces - unions, NGOs, grass-roots organizations and researchers - are confronted with the difficult task of starting to build amid the ruins of Oslo:

Based on a briefing paper by Lee-O’Brien, Oxfam, GB, February 1999

The United Nations Relief and Works Agency for Palestine Refugees (UNRWA) was formed in 1950 as an emergency relief and works agency but over time, transformed into the provider of basic education, health and social services to registered refugees. Despite lacking a political mandate UNRWA became, for refugees and host governments alike, the embodiment of international recognition and concern for the situation of Palestinian refugees.

General Notes:
Jerusalem and village share is calculated based on percentage of refugees out of total refugee population in 1948. Villages include those annexed to Jerusalem after the 1948: Lifta, ‘Ayn Karim, Dayr Yasin and Malha.

Advocate for the Palestinian Right to Restitution

The following introduction to the issue of restitution is based on a BADIL research report prepared for publication in spring 1999.

In the closing decades of the 20th century, claims for restitution of refugees, displaced persons (DPs) and other peoples who have been deprived of their basic rights, including the right to their lands and properties, have been raised worldwide on a scale previously unknown. While international law emphasizes refugee protection (non-refoulement), refugee repatriation was put on the international agenda in the 1990s by the massive new refugee problems created by the civil wars in such places as the former Yugoslavia, Rwanda, and Chechnya. According to the 1998 World Refugee Survey, published by the US Committee for Refugees, repatriation has become the favored solution for refugees. The assumption of long-term exile is outdated.

Question 2: One of every two Palestinians lost land or other assets when Israel was created in 1948. Now that the US intervened in getting Switzerland and other countries to give compensation for Jewish losses in World War II, do you agree or disagree that the US should intervene to get Israel to pay compensation to Palestinian survivors?

Palestinians in Lebanon – A Struggle for a Future with Hope

Palestinian refugees in Lebanon are trapped in a situation characterized by the collapse of their traditional support systems (PLO and UNRWA) on the one hand, and the impossibility of self-sustenance caused by the Lebanese denial of social and civil rights on the other.

Palestinians, defined as foreigners by Lebanese law, are not permitted to work as professionals. Engineers, technicians, physicians, lawyers, teachers, (in total more than 60 professions) cannot find legal employment outside the refugee camps. Lebanese employers violating the law run the risk of heavy fines, a risk for which they compensate themselves by paying low salaries and no social security fees to their illegal Palestinian employees.

In January 1999, the new Lebanese government announced the lifting of the special travel and re-entry permit regulation for Palestinians issued by the previous government in 1996. This regulation, which had conditioned re-entry of Palestinians to Lebanon with a special permit issued by the Lebanese Department for Public Security prior to departure, had prevented the return of thousands of Palestinians, residents of Lebanon, who were abroad at the time of its issuance. The cancellation of this permit policy, a cause of division of Palestinian families and major source of bribery and corruption, had since been one of the major demands raised by Palestinian refugees in Lebanon. According to the Lebanese Department for Public Security, consultations between the Lebanese president Emile Lahhoud and Prime Minister Salim al-Houss and the Department resulted in the decision to handle Lebanese travel documents issued to Palestinians in Lebanon in the same way as Lebanese passports.

They brought us books
In which to read
The reason why
Is the brain to feed?

We don’t have brains
They surely realized
Long time ago
Ours were paralyzed.

To think is human
But are we?
The world thinks we are not
As you can see.

BADIL Resource Center for Palestinian Residency & Refugee Rights and the Institute for Jerusalem Studies (IJS) announce the publication of a new book, Jerusalem 1948 – The Arab Neighborhoods and their Fate in the War. This joint project was launched four years ago to study the events which transformed the western parts of Jerusalem into a Jewish city as well as the fate of the Palestinian communities evicted in this process.

Almost one year ago (6 April 1998), a group of Israeli lawyers and human rights organizations submitted their petition against the Interior Ministry’s policy of confiscating ID cards of Palestinian Jerusalemites. Working against a reality full of unfavorable legal precedents, the petitioners (Hotline, ACRI, PHR, AIC, DCI-Israel, Atty. Lea Tsemel) had carefully prepared their argument over a period of more than one year (for details see: ARTICLE 74/24, June 1998). One year later, on 22 April 1998, the Israeli High Court will give its verdict in what is likely to represent the last chance for challenging the policy of ID card confiscation in the Israeli legal system.

Palestinian Residency Rights under the PA

On January 28, 1999, BADIL's lawyer Sahar Francis met with staff of the Palestinian Civil Affairs Committee (CAC) in order to receive updated information about the current developments in regards to Palestinian residency rights in the West Bank. The situation described by the CAC confirms that very little has changed since 1997, when BADIL first published its report Exposed Realities: Palestinian Residency Rights in the “Self Rule” Areas Three Years After Partial Israeli Redeployment. The problem of some 80,000 Palestinian residents whose ID cards were confiscated by Israel prior to the Oslo Accords has remained unresolved. The joint Israeli-Palestinian committee to be established - based on the 1995 Taba Agreement - in order to set up a procedure for the re-instatement of "lost ID cards" remains in limbo, not a single meeting was conducted in 1998-99. Applications for family reunification submitted by Palestinian residents to the PA according to the standard procedure are unlikely to reach the decision-making Israeli authorities. "Wasta" (connections to influential persons) is what makes an application move ahead within the narrow parameters set by the Israeli quota. As the deadlock in the political negotiations continues, Israel continues to restrict Palestinian entry into the PA areas by denying family reunification and visit permits, a policy which - as a result of the Oslo Accords - can no longer be challenged in Israeli courts. Many of those who succeed to come, on a short-term visit permit or tourist visa, simply stay, although the PA cannot provide legal protection. This Palestinian way of "creating demographic facts on the ground", however, is not a PA policy. It is the combined result of the individual determination of a people who prefer insecurity in their homeland to the hardships of exile.

al-majdal replaces our old quarterly ARTICLE 74 which updated our international constituency about our efforts for the promotion of Palestinian residency and refugee rights between 1991 and 1998*. Over a period of several years, ARTICLE 74 had gradually developed from a small newsletter focused on the hardships - caused by the 1967 Israeli occupation - of Palestinian families who wish to live united in their homeland, into a modest magazine covering a much larger variety of issues, related to the ongoing struggle of the exiled Palestinian people for the restitution of their rights in Palestine (right of return to their homes, recovery of lost property, compensation for physical and psychological damage caused by their forceful eviction since 1948). The critical re-examination of Palestinian history, and the search for new ways and means to raise Palestinian refugee rights in the post-Oslo era became the pressing agenda of the Palestinian people which began to express itself in our small, English language magazine. By 1999, the frame of reference suggested by its old name (ARTICLE 74/Protocol of 1977 Additional to the Geneva Convention, concerning facilitation of family reunification) is no longer up-to-date.