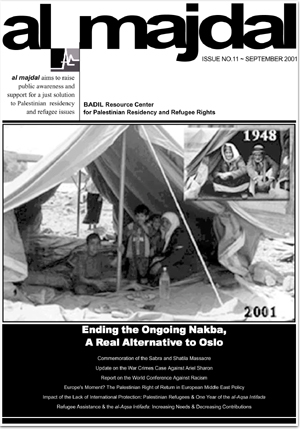 Under the headline "Ending the Ongoing Nakba, A Real Alternative to Oslo," the September issue of Al-MAJDAL examines the structural flaws of the Oslo-Mitchell-Tenet process. The same flaws underlie recent statements and plans announced by US President George Bush and British Prime Minister Tony Blair in the context of US and British "anti-terror coalition building," and will bring to fall also future international peace efforts in the Middle East.

The Program of Action approved by some 3,000 NGOs at the recent World Conference Against Racism in Durban, South Africa, is presented as an alternative to the Oslo/Mitchell/Tenet process. It is a framework clearly based on international law and UN resolutions, provides an independent, international monitoring and enforcement mechanism, and addresses the root causes of the Israeli-Palestinian conflict - i.e. displacement/expulsion, dispossession, occupation, and denial of the right to self-determination.

One year after the outbreak of the al-Aqsa intifada on 29 September 2000, intensified diplomatic efforts by the United States and the European Union are being applied against Israel and the Palestinian leadership to implement the Tenet cease-fire plan and the Mitchell Committee recommendations.

Conventional wisdom suggests that these renewed efforts are related, in part, to: 1) the US-led campaign to create a coalition (including Arab/ Muslim states) for what has been labeled as the new "war against terrorism"; as well as, 2) the opportunity afforded by adjustments in foreign relations to press both parties to "calm the situation on the ground" in the 1967 occupied Palestinian territories. The question that remains unanswered,however, is what is the endgame or objective of these intensified US/EU efforts, and, is there an alternative?

Tenet/Mitchell/Oslo - A Flawed Process The Tenet cease-fire plan and the Mitchell Committee recommendations comprise the backbone of joint US, EU, and UN efforts over the last 12 months, starting with the Sharm al-Sheikh summit in October 2000, to get Israelis and Palestinians back to the negotiating table. The process consists of a series of graduated steps, starting with the much talked about on-again/offagain Peres-Arafat meeting finally held in late September; followed by the implementation of a cease-fire plan mediated by CIA Director George Tenet (consisting of a series of graduated steps); intended to lead to the implementation of the Mitchell recommendations (also a series of graduated "confidence-building" measures); and, finally, the Oslo process - i.e., political negotiations concerning a durable solution to the conflict.

Both the Tenet plan and the Mitchell recommendations, however, contain fundamental flaws, which harbor the poten  tial of reproducing the delays, seemingly interminable negotiations, loss of confidence in the political process on the ground, and breakdowns between negotiators that have characterized the Oslo process from the start.

(BADIL & Press Reports): Since 1982, when thousands of innocent Palestinian civilians were slaughtered in the Beirut refugee camps of Sabra and Shatila by the right-wing Lebanese allies of Israel's occupation forces headed by then Minister of Defense Ariel Sharon, annual commemorations of this massacre have united the Palestinian people in the homeland and in exile. Over the past two decades, the massacre of Sabra and Shatila has come to symbolize Palestinian suffering rooted in mass forced displacement, military occupation, and the denial of the right to self-determination and the right of refugees to return to their homes and properties.

The complaint brought against Ariel Sharon before the Belgian judiciary on behalf of survivors of the Sabra and Shatila massacre was delayed in early September until an appeal submitted by the lawyer representing the Israeli government on behalf of Sharon could be heard. Belgian civil rights lawyer Michele Hirsch, who was hired by the Israeli government is asking the investigative judge to drop the case on grounds that Sharon has already been the subject of a judicial procedure in Israel, i.e. the Kahan Commission.

The Palestinian Right of Return in European Middle East Policy

The European Union
"On hearing the title of my chapter, a friend of mine burst out laughing, 'But there is nothing to say. The European Union has never taken a clear stand on the right of return of refugees,'" recounts French journalist Alain Gresh.(1) "The European Union certainly has taken a stand on the national rights of the Palestinians, on settlement policy, Jerusalem, the creation of the Palestinian state and Israel's right to security, but any references to refugees were vague and the term 'right of return' was never used. I was on the point of giving up when I stumbled, almost by chance, on a text dated 1971 known as the 'Schumann document,' named after Maurice Schumann, the French Foreign Minister at the time, under President Georges Pompidue."

A year earlier, in 1970, the European Community, then composed of only six member states, had launched an initiative for European Political Cooperation, which provided for regular consultations on important foreign policy issues in order to "strengthen their solidarity by favoring harmonization of points of view, concerted attitudes and, wherever possible and desirable, common actions." This initiative marked the beginning of a process aimed at clarifying common strategic interests and unifying foreign policy on the European level, especially with regard to regional and international crises that might jeopardize economic and political stability in Europe itself.

A Framework for Durable Solutions
"Putting the Principles into Action"
The first detailed public indication from thePalestinian leadership of how the right of return, restitution, and compensation might be
implemented was revealed in draft plan published in late summer 2001 by Le Monde Diplomatique. The draft plan, presented by Palestinian negotiators at the talks in Taba, Egypt, in January 2001, essentially marks a transition from clarifying principles to putting the principles into action.

The plan, which is based on international law and UN Resolution 194, addresses the issue of moral and legal responsibility for the forced displacement and dispossession of the Palestinian civilian population in 1948 and provides a broad and clear definition of those covered by the plan (i.e., who constitutes a Palestinian refugee). The plan calls for the creation of three mechanisms to implement return, restitution, and compensation and then outlines the modalities for the implementation of these three rights. Mechanisms include a Repatriation Commission, a Compensation Commission, and an International Fund.

Escalation of Attacks on Refugee Camps
Between July and September 2001, Israel continued to escalate its campaign of state-sponsored terror against the Palestinian people temporarily reoccupying several West Bank cities, including Beit Jala (Bethlehem), Jenin, and Jericho, resulting in numerous deaths and injuries, heavy damages and looting by Israeli soldiers. During the same period, Israeli forces stepped up attacks on Palestinian refugee camps, which are considered to be protected spaces under international law, even in the case where individual combatants are found to be within the space of a refugee camp.

List of 149 Palestinian victims of Israeli violence between 27 June and 26 September 2001. 22 of those killed were below the age of 18. Between 29 September 2000 and 29 September 2001, over 700 Palestinians were killed by Israeli military forces and settlers, including Palestinians inside Israel, and over 16,100 were injured. During the month of September, for example, the Palestine Red Crescent recorded the highest number of deaths per month since
December 2000 while the injuries per month from live ammunition during August and September (36%) exceeded the monthly rate from the last 12 months. The highest monthly rate prior to the summer was 28% in December 2000.

"One Year after the al-Aqsa Intifada: Increasing Needs & Decreasing Contributions"

Massacre: One of Many

When the massacre of Sabra and Shatila was committed I was not yet born. I got to know it through my questions about the miserable life we lead in the camp, in Shatila. I am a fourteen-year-old girl now. I, like all children in Shatila, never enjoyed my childhood, we never felt secure, we never smiled except a refugee smile which lasts for few seconds and is all the time just drawn on our faces and does not stem from our hearts. I grew up in Shatila and my parents told me about Shatila's wound, a wound that will stay in my heart forever, they told me about the massacre. I knew from the stories told by the survivors that thousands of our people were massacred in the cruelest ways and in cold blood. Darkness overshadowed Shatila for three days; three days of death, torture, fear and horror. We were told that Israel with its allies in Lebanon committed the massacre. That is how Ariel Sharon became familiar to me.

BADIL Information Packet (3rd Edition) - Includes Right of Return, Campaign for the Defense of Palestinian Refugee Rights Brochure, Palestinian Refugees in Exile Country Profiles, and BADIL Information & Discussion Briefs. (English & Arabic)
The Packet is also available on the BADIL website.
Follow-Up Information Submitted to the Committee for Economic, Social and Cultural Rights, Regarding the Committee's 1998 "Concluding Observations", Regarding Israel's Serious Breaches of its Obligations under the International Covenant on Economic, Social and Cultural Rights, for the 13 November 2000 Convening of the Committee, With Special Documentary Annex (Prepared by
Dr. Salman Abu Sitta), Quantifying Land Confiscation inside the
Green Line.(English and Arabic), 65 pages