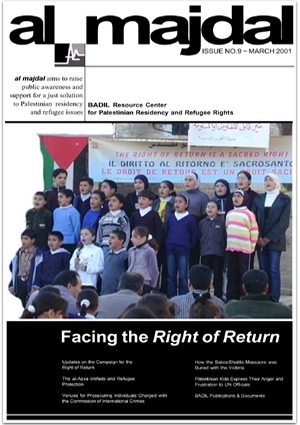 Starting with this March issue, AL-MAJDAL is published in magazine format and the editorial team at BADIL is assisted by a new editorial advisory board composed of Palestinian and international experts and activists in the global right-of-return network. We thus hope to increase the relevance of AL-MAJDAL as a tool for information and sustained advocacy for Palestinian refugee rights at a time when increased violence and the intransigence of Israel's Sharon government have created a situation where immediate protection needs of the Palestinian people, rather than negotiations about a just and durable solution of the historical Israeli-Palestinian/Arab conflict, have moved into the forefront of public debate. In the context of the prolonged emergency situation in the 1967 occupied territories, only an active and worldwide right-of-return network can ensure that the Palestinian refugees' rights of return and restitution will remain on the agenda of international policymakers. AL-MAJDAL is dedicated to, and aims to serve, all those who share with us in this effort.

* "Facing the Right of Return": update on activities in the framework of the Campaign for the Defense of Palestinian Refugee Rights
* International (Refugee) Protection: "Palestinian Refugees and the al-Aqsa Intifada" (BADIL Report); summary and analysis: the Report by the UN Special Commission of Inquiry; the "Mitchell" Committee and the "Or" Commission of Inquiry inside Israel
* In Memoriam: Palestinian victims of Israeli violence
* Background: Venues for Prosecuting Individuals Charged with International Crimes (BADIL Legal Unit)
* Feature: "Seven Day Horror; How the Sabra and Shatila Massacre was Buried with the Victims" (Rosemary Sayigh)
* Refugee Assistance: UNRWA and al-Aqsa Intifada
* Refugee Voices: "Palestinian Kids Express their Anger and Frustration to UN Officials" (Aidun-Lebanon)
* BADIL Resources
* Document Section

Facing the Right of Return

The period of final status negotiations between Camp David II (July 2000) and Taba (December 2000) elicited for the first time since the beginning of the Oslo process a degree of substantive discussion and debate in the Israeli press among journalists, academics, and political figures about the right of return of Palestinian refugees.

The debate ranged from a complete rejection of the right of return to more nuanced approaches that purported to "recognize" the right of return but limit its implementation through a variety of restrictions or disincentives. The broad objective of these arguments is inherently discriminatory - i.e., to maintain a clear Jewish demographic majority in Israel. "The Jewish majority's explicit desire […] to retain its numerical superiority," noted Israeli writer David Grossman in a Norwegian daily newspaper, had become "almost embarrassingly transparent.". 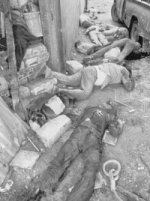 Community Mobilization:
"No Peace Without the Right of Return"

Encouraged by - and always doubtful of -the firmness of the official Palestinian negotiating position, refugees in the Israeli occupied West Bank and Gaza Strip have embraced the new al- Aqsa intifada and shaped its public speech and demands: full Palestinian sovereignty over the 1967 occupied Palestinian lands including eastern Jerusalem and al-Haram al-Sharif, and recognition and implementation of the refugees' right of return, restitution and compensation according to international law as affirmed in UN Resolution 194. The new Palestinian vision of return is strong and powerful and no longer a vague dream.

Al-Rabat Declaration on the Rights of Palestinian Refugees: Massive support for Palestinian rights, including refugees' right of return, expressed by popular Arab strata during the al-Aqsa intifada resulted in the explicit dedication of the Third International Conference of the Arab Human Rights Movement to the rights of Palestinian refugees.

In a sixty page report submitted in March 2001 to the 57th Session of the UN Commission on Human Rights, the special UN Commission of Inquiry, established (Resolution E/CN.4/S-5/1, 19 October 2000) to investigate human rights violations committed by Israel in the occupied Palestinian territories, emphasized the urgent need for international protection for Palestinian refugees and the Palestinian people.

How the Sabra/Shatila Massacre
was Buried with the Victims

The obscenity of the massacre, its sadistic details, the surrealist landscape of sun-bloated bodies and bulldozed buildings - all this tended to block out in Western media coverage less visible evidence of careful logistical planning. Once journalists succeeded in penetrating the massacre area, their detailed reporting and photography at first horrified but then 'naturalized' the episode in familiar Western stereotypes of Arabs - 'revenge', 'hate', 'primitive brutality'. Massacre photos took on a strange transhistoricity as they were used over and over again by Western media, as if these contorted and swollen bodies had never really lived.

The heavy demand on UNRWA services in the occupied West Bank and Gaza Strip, including emergency services, comes at a time when the Agency continues to face chronic deficit problems that affect all areas of its operations. In February 2001, the Agency warned that it expected its regular budget to be around $65 million for 2000. In 1999- 2000, seven of the top 13 donor countries who account for over 90 percent of the Agency's budget (regular & project) in 1999 met the 5 percent annual increase necessary to keep pace with the expanding refugee population. If one uses 1950 as the standard base for the 5 percent increase per annum, however, none of UNRWA's donor countries have kept pace with necessary annual increases.

Individuals Charged with the Commission of International Crimes
Venues for Prosecuting Because of the ever-expanding condemnation of international crimes of a humanitarian or human rights law character, the world is seeing a corresponding slow-but-steady increase in the availability of judicial fora where individuals responsible for perpetrating such crimes can be prosecuted. It is certainly to be hoped that this trend will continue and will lead to successful convictions and adequate punishment for criminals found guilty of committing these types of offenses against international law.

Palestinian Kids Express Their Anger and
Frustration to UN Officials

"We feel helpless, we need to do something to support our friends in Palestine," said a young person from Shatila, expressing his anger at pictures portraying the deaths of Palestinian children in the Intifada. "What shall we do? Go demonstrate? We have been demonstrating for months but our voice was not heard!" "We are just wasting our time," replied another. "We need to do something that makes our cries heard," said another. "We need to have answers to our questions about the reasons the world is not moving to save us and about the injustices falling upon us as Palestinian refugees."

List of 107 Palestinian Victims of Israeli Violence between 10 December 2000 and 21 March 2001.
For the names of Palestinians killed between 29 September and 9 December 2000 see al-Majdal, Issues No. 7 and 8.
Between 29 September 2000 and 27 March 2001, 404 Palestinians were killed by Israeli security forces, of whom 105 are below the age of 18. (PCBS figures). During the same period, 12,230
Palestinians were injured. This includes 2,425 injuries due to the use of live ammunition, 4,953 (rubber/ plastic bullet), 3,868 (tear gas), and 1,344 (misc.). (Palestine Red Crescent figures). The following names of Palestinians killed by Israeli forces are derived from lists prepared by the Palestinian Authority Ministry of Information and the Palestinian Center for Human Rights. Due to the absence of a central documentation system, there are some differences between the lists in terms of age and village of origin.
Differences between the two lists are presented in brackets. According to B'tselem 46 Israelis were killed
in the occupied territories and 16 inside Israel during the same period.

BADIL - Information & Discussion Brief No. 8:
Palestinian Refugees and the Right of Return: An International Law Analysis. Prepared for BADIL by Gail J. Boling, Coordinator of the Legal Unit (English & Arabic) For a complete list of BADIL Information and Discussion Briefs, see the BADIL website
BADIL Follow-Up Information Submitted to the Committee for Economic, Social and Cultural Rights, Regarding the Committee's 1998 "Concluding Observations", Regarding Israel's Serious Breaches of Its Obligations under the International Covenant on Economic, Social and Cultural Rights, with Special Document Annex (Prepared by Dr. Salman Abu Sitta), Quantifying Land Confiscation inside the Green Line (English & Arabic, 70 pages)

1. Future of the Palestinian Refugees under the Current Political Settlement: