Under the title "LESSONS LEARNED OR MISTAKES REPEATED?" the December issue of Al-MAJDAL examines the role of international community in 52 years of Israeli-Palestinian conflict. This at a time, when the gaping distance between internationally recognized rights of the Palestinian people and their implementation is all the more obvious this year: Three months of Palestinian uprising and Israeli repression have resulted in over 300 killed and more than 10,000 injured Palestinians, and their call for international protection has not been answered.

Patrimony of the Dispossessed

The Ordeal of Leaving Jaffa (excerpts)
Memory lane becomes selective, as one probes into its earliest stages. As young as I was, my memory hasturned into short flashes. It is well known that years can elapse from one's memory, but it cannot erase important events that have molded one's life. These events are important, even by a child's own standards. I cannot forget the small street in the al- Manshiyyah section of Jaffa where I was raised, close to Tel-Aviv.

I still remember the high tower with the huge clock at the top and how I, as a child, used to play with other children on the dirty street worrying about being admonished by my mother every time I dirtied my clothes. At the end of the street on the corner was the bar-restaurant owned by my father - the Palestine Cafe. My father had a good command of the English language, which helped bring in the British clientele. Once when I came to the café to bring my father a message from my mother a British soldier gave me a chocolate candy. I remember how he looked in his khaki uniform sitting on the barstool sipping his drink. I was proud and confused as I listened to my father talking to the British soldier in a foreign language.

From Mandate to Partition, Lessons Learned or Mistakes Repeated - The United Nations and Palestine

(This article is based on a shorter bulletin released on the 22nd International Day of Solidarity with the Palestinian People, 29 November 2000)
More than five decades after the United Nationsfirst addressed the issue of Palestinian rights, it is appropriate to revisit the discussions, debates, and proposals of 1947 and 1948 that led up to the adoption of UNGA Resolution 181(II) to see what kinds of lessons can be drawn from the UN's first attempt to deal with the so-called question of Palestine. This is particularly relevant at the current time with renewed, albeit limited, involvement of the United Nations after the collapse of the Madrid/Oslo process and Israel's brutal policy to destroy legitimate Palestinian resistance to the occupation and the denial of Palestinian rights.

The Reaction of the International

The reaction of the international community to the events of the past three months can only be characterized as a kind of self-induced impotence that borders on contempt for the human rights of the Palestinian people. The United States, along with key European partners, have attempted to either sideline or emasculate efforts to resolve the current crisis within the framework ofinternational law and UN resolutions.

On the issue of Protection
The constant call by Palestinians, including therefugees, for international protection underlines the prevailing sense of worry and uncertainty about the future. The "protection" theme has been
raised before by UNRWA's Commissioner- General in his meeting with refugees and camps' activists.
It is true, as the refugees in the West Bank and Gaza have pointed out, that UNRWA ran an effective "Passive Protection" programme during the previous intifada. It is also true that the "Refugee Affairs Officers" programme created a sense of protection and was credited with saving lives and reducing tension. But it is also true that the situation that prevailed then was completely different from the situation that prevails today.

Palestinian refugees have been strongly affectedby Israel's military and economic policies applied to suppress the Palestinian uprising. Due to their vicinity to Israeli military installations, settlements and by-pass roads, the refugee camps of 'Askar/Nablus, 'Aida and Beit Jibrin/Bethlehem, Aqbat Jaber/Jericho, Shati, Jabalya, Rafah and Khan Younis/Gaza have become repeated targets of Israeli attacks by heavy weapons - rockets, shells, 500mm and 800mm ammunition fired from high-caliber automatic weapons, tanks, and helicopter gun-ships - in addition to attacks perpetrated by Israeli settlers which have been recorded also in al-Fawwar camp/Hebron.

(Cyprus 6-10/10/2000)
Badil Resource Center and the Trans-ArabResearch Institute (TARI) convened, in coordination with 'Aidoun Group - Lebanon, the Right of Return Coalition in Europe, and in consultation with 'Aidoun Group - Syria, the Society for the Defense of the Internally Displaced, the Committee for the Right of Return in Jordan and other organizations, committees and groups active in the field of the defense of the Palestinian Right of Return in Palestine, Syria, Lebanon, Jordan, North America and Europe a meeting in Cyprus between 6-10 October 2000 with the following aims:

UN Commission on Human Rights
In mid-October, after three weeks of Israeliaggression in the occupied territories, the 53 member UN Commission on Human Rights, the primary human rights body in the United Nations, met in a special session, the fifth in its history(previous special sessions were held on the situation in East Timor, the former Yugoslavia and Rwanda), to discuss the current situation in Palestine, based on a request by the Permanent Representative of Algeria on behalf of the Council of Arab Permanent Representatives Members of the League of Arab States on 3 October. 47 out of 53 members of the Commission supported convening of the special session.

For more than two months Palestinian and international organizations have been calling for international protection of the Palestinian people, with particular attention to especially vulnerable sectors like the refugees, the Palestinian community in eastern Jerusalem, and Palestinians in remote areas of the West Bank living in areas near Israeli settlements. As of press time, discussions regarding the deployment of a UN force were continuing in the Security Council with draft resolutions submitted by the Non- Aligned movement and by France. 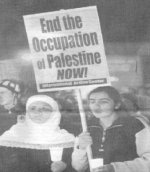 Committee on the Covenant on Economic, Social and Cultural Rights

(CESCR)
Session: November-December 2000
During the last two weeks in November, the UN Committee on the Covenant on Economic, Social and Cultural Rights, to which Israel is a signatory met in Geneva to consider the reports of the countries scheduled for review regarding implementation of the Covenant. Numerous local and international NGOs, including BADIL, submitted briefs to the Committee relative to the social, economic and cultural rights of the Palestinian people.   Israel issued a note verbale on 3 November stating that it's second periodic report, including issues referred to and information requested by the Committee in its Concluding Observations date 4 December 1998, would be ready for submission no later than March 2001. The report was scheduled for submission to the November-December session, including material on the occupied territories not included in the first report. While Israel did not BADIL's report to the Committtee focused exclusively on the rights of Palestinian refugees, 1967 displaced Palestinians and internally displaced Palestinians. The submission is part of BADIL's new legal project related to refugee rights.

Regarding Israel's Laws Applied inside the Green Line

The "Right of Return"
1. The Committee should conclude that Israel'sland confiscation laws as implemented - i.e., as selectively applied against Palestinian landowners only to deprive them of their landwithout being equally applied to deprive similarly situated Jewish landowners, in addition to the complete failure to provide due process guarantees for the Palestinian landowners or fair  market value rates of compensation for property so confiscated - inside the 1949 "Green Line," and in particular the Absentees' Property laws, are illegal under international law because they are framed and implemented in a way that discriminates on the basis of racial, ethnic, religious or political criteria (to work exclusively in favor of Jews and exclusively against the interests of Palestinian Arabs), which prima facie violates the ICESCR.

Legal implications of United Nations involvement in the future of Palestine were raised at the outset when the General Assembly convened in April 1947 to consider the issue of Palestine.(1) Key Arab states, several of which had already gained independence after a period of Mandatory administration (2), objected to the draft agenda (UN Doc. A/293) under which the General Assembly was requested to approve to the creation of a special committee to further investigate issues surrounding the future status of Palestine.