Remembering the Victims of Sabra & Shatila (Issue No.7, Autumn 2000) 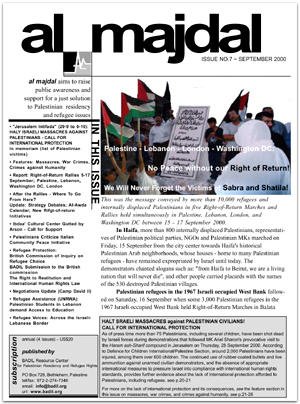 Our September issue of Al-MAJDAL was planned to highlight the recent growth in activism around Palestinian refugees' right of return around the world. Thousands of Palestinians and their supporters gathered in major cities of the world, in 1948 Palestine/Israel, in 1967 occupied Palestine, and in the Arab exile on the 18th anniversary of the massacre of Sabra and Shatila to call for this right and for a just solution to the largest and longest running refugee problem in the world today. Just as Al-MAJDAL went to print, the glaring need for international protection of the Palestinian people, including its refugees, was tragically demonstrated once again as Israeli forces fired on Palestinian worshippers in Jerusalem on September 29. Since then Israel's violent repression of popular Palestinian protests ("Al-Aqsa/Jerusalem Intifada") has caused the death of over 100 Palestinians and left over 2000 injured.

We Will Never Forget the Victims of Sabra and Shatila!

This was the message conveyed by more than 10,000 refugees and internally displaced Palestinians in five Right-of-Return Marches and Rallies held simultaneously in Palestine, Lebanon, London, and Washington DC between 15 - 17 September 2000.
In Haifa, more than 800 internally displaced Palestinians, representatives of Palestinian political parties, NGOs and Palestinian MKs marched on Friday, 15 September from the city center towards Haifa's historical Palestinian Arab neighborhoods, whose houses - home to many Palestinian refugees - have remained expropriated by Israel until today. The demonstrators chanted slogans such as: "from Haifa to Beirut, we are a living nation that will never die", and other people carried placards with the names of the 530 destroyed Palestinian villages. Palestinian refugees in the 1967 Israeli occupied West Bank followed on Saturday, 16 September when some 3,000 Palestinian refugees in the 1967 Israeli occupied West Bank held Right-of-Return Marches in BalataCamp (Nablus), and in Bethlehem where a new "Memorial for the Victims of the Massacres at Sabra and Shatila and the Palestinian Exile", was established in Aida Camp on a plot provided by the Islamic Waqf. The marches, organized by popular refugee organizations, were joined by Palestinian parliamentarians (PLC), representatives of political parties, public institutions and NGOs.

In Lebanon a photo exhibition of the 1982 massacre at Sabra and Shatila was opened on 13 September in Shatila camp. On Friday, 15 September, several thousand Palestinian refugees were joined by some 200 Italian human rights activists, parliamentarians, and journalists in 'Ain al-Hilwe camp to call for the right of return. The following day the Italian delegation joined Palestinian refugees in Shatila along with several thousand Lebanese supporters for a march to the site of the massacre. Two days later, the delegation joined in a candle light march to commemorate the massacre at Sabra and Shatila.

LONDON
Trafalgar Square Right of Return Rally
Speech by Dr. Tikva Honig-Parnass (excerpts) Co-Editor of Between the Lines (former editor of News From Within) My generation was raised in pre 1948 Palestine on the colonialist ideology of the Zionist labor movement and passed through an indoctrination process which resulted in the dehumanization of Palestinians and ourselves as well. Blatant racism, combined with total commitment to the mission of establishing an exclusive Jewish state in Palestine, had trained us well to take up the challenge set forth in the '48 war.

During the early morning hours of 26 August an arson attack in Deheishe Refugee Camp destroyed the computer lab, part of the Across Borders Project, and parts of the library of Ibdaa' Cultural Center. Thirteen computers and computer desks were destroyed while the server and scanner was stolen. Losses are estimated at $25,000 in equipment alone.

"We Demand Respect for PalestinianRights, for our Heritage and Struggle We Do Not Need Commercial Initiatives Aimed at Normalization with Israel"
In early September, an Italian community initiative for peace in the Middle East, organized by Flavio Lotti on behalf of Italian community institutions (municipalities, NGOs), brought some 1,000 Italian tourists to the Jerusalem-Bethlehem area.

British Commission of Inquiry on Palestinian Refugee Choice Meets with Representatives of Refugee Organizations About the Commission:

The Commission of Inquiry is an initiative of the Joint British Parliamentarian Middle East Council and based on the recognition of Britain's historical responsibility for the creation of the Palestinian refugee problem. 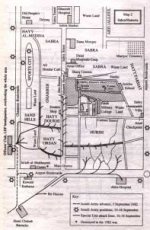 Political Report from the Executive Committee of PLO for the Palestinian Central Council (excerpts)
During the regular meeting held in the Gaza Strip9-10 September 2000 [During Camp David II] the Israelis did not present a clear proposal for a solution of the refugee issue. They reacted negatively and rejected suggestions presented by the Palestinians. They rejected the admission of their moral and legal responsibility for creating the refugeecatastrophe.

The Israelis talked once about the possibility of accepting UN Resolution 194, but in an indirect and illegal way: implementation of whatever was agreed upon would be considered to be implementation of the resolution. In addition, they demonstrated an acceptance for the return of several hundred refugees each year on a humanitarian basis only.  Concerning compensation, the Israelis suggested the possibility establishing an international fund that would include compensation of Jews who had emigrated from Arab countries. Concerning funds from the transfer of refugee property by the Israeli Custodian of Absentees' Property -established to administer the property - the information convey-ed to the Palestinian delegation is that revenues in the fund have already been spent.

Overall Donor Funding Remains Flat:
Refugee Students in Lebanon ProtestLack of Education Opportunities As UNRWA prepares to enter the last quarter of 2000, overall donor funding remains flat. Leading up to host-donor nations meeting in Amman in late September it was announced that funds expected from donor countries will not be able to cover the Agency's expenditures by the beginning of November. Additional pledges from donor countries to cover the $27 million deficit for 2000, however, averted further austerity measures in the remaining months of the year. 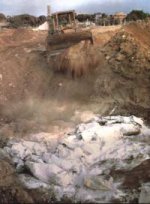 On 28 September 2000, Ariel Sharon, head of the Israeli Likud party, conducted a so-called private visit, accompanied by 3,000 Israeli police and special forces, to the Muslim holy site of al-Haram al-Sharif (site of the al-Aqsa Mosque and the Dome of the Rock) in the Old City of Jerusalem, despite warnings by Palestinian, Arab, and some Israeli and western officials that the visit could destabilize the situation on the ground. On Friday 29 September, the provocation created by the visit, and the massive Israeli police presence in the Old City and around the Haram al-Sharif, resulted in Israeli occupation forces, including snipers, opening fire on the large number of Palestinian worshippers assembled for prayer, thus triggering the bloodiest Israeli-Palestinian confrontations since the beginning of the Osloprocess in 1993. Since then, battles between civilian Palestinian protestors - many of them refugees - Palestinian security  forces, and the Israeli occupation have spread all over the West Bank, Gaza Strip, and Palestinian population centers inside Israel.

Remembering Sabra and Shatila,Deir Yassin, Dawayma …
Massacres, War Crimes, CrimesAgainst Humanity
Between September 16-18, 1982, several thousand Palestinian refugees - men, women, and children - were brutally slaughtered by Lebanese Christian Phalangist forces allied with Israel, while Israeli forces looked and prevented refugees from fleeing the camps.1 The massacre happened within weeks of the US brokered withdrawal of PLO fighters from Lebanon in the late summer of 1982. Left without protection, Israeli-allied Lebanese forces were able to enter the camps of West Beirut without opposition. On September 16, the day the massacre began,General Amos Yaron, commander of Israeli  forces in Lebanon - and now Director General of the Israeli Defense Ministry - provided Lebanese Forces Intelligence with aerial photographs to arrange entry into the camps.

Massacres and the Nakba

Massacres and the Nakba
Sabra and Shatila, however, were not an aberrationin the fifty-two years of Palestinian exile.1 According to a recent compilation of studies based on UN and Israeli archives, more than 30 documented massacres were committed by Zionist/Israeli forces during the 1948 war in Palestine.2 This included 24 massacres in the north (Galilee), 5 massacres in the central area of Palestine, and another 5 in the south.3

On Saturday 29 July 2000, over 500 Palestinian children and youth from refugee camps in Lebanon and the West Bank journeyed by bus to the border between Lebanon and 1948 Palestine/ Israel to meet and call for the right of return.
Within minutes of arriving at the boder, the Israeli military set up a roadblock to prevent refugees from the West Bank from reaching the fence at Fatima Gate to greet their brothers and sisters from the camps in Lebanon, and exchange gifts, including material for the Campaign for the Defense of Palestinian Refugee Rights, personal addresses, and email addresses.

Executive Summary "When Refugees Go Home" (August 2000) (English and Arabic) Electronic copies (not for citation) available from BADIL.
Jerusalem 1948: The Arab Neighbourhoods of the City and Their Fate in the War (BADIL/ IJS, 1999) The book is available in English with Arabic translation of the introduction, 304 pages,
US$15. ISBN 0-88728-274-1