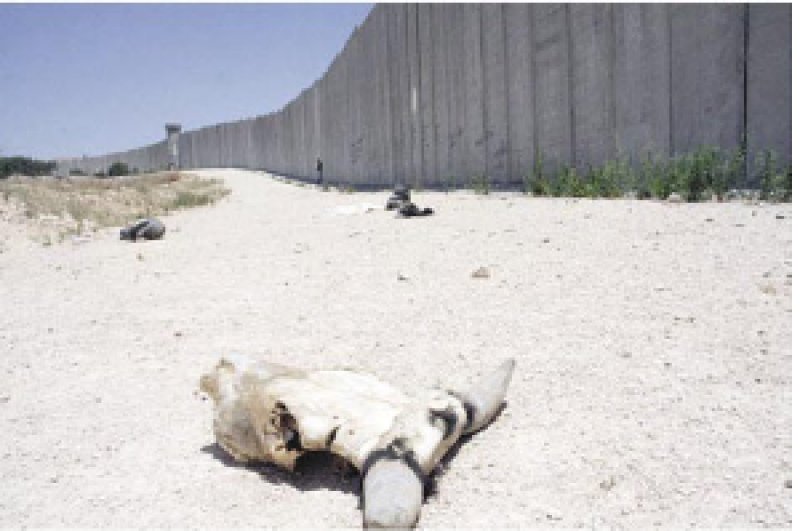 What does this newly found “military flexibility” entail?

Discussions of how to stop Qassam rockets have led some Israeli military officials, amongst them Deputy Defense Minister Ze’ev Boim, to openly argue that the Israeli military forces should target civilian areas in the Gaza Strip.(2) While targeting civilian areas is not a new feature of the Israeli occupation, Israel has begun to employ tactics used previously during its occupation of southern Lebanon, namely, creation of a self-declared ‘buffer zone’ and distribution of leaflets warning the population of impending attacks.

On Thursday, 29 December, the army began enforcing a ‘buffer zone’ over a sixteen kilometers square area in the northern Gaza Strip including some of its evacuated colonies. A military source said that “until it becomes clear whether these residents responded to the order to clear the area, the shelling will not be directed at their residences.”(3) In other words, civilian areas could be targeted if Palestinians are deemed not to be following instructions. The Palestinian Centre for Human Rights reported that on 31 December 2005, the Israeli occupying forces shelled the northern Gaza Strip and killed two Palestinian civilians, who were at least two kilometers away from the border between the Gaza Strip and Israel.(4)

The ‘buffer zone’, enforced through a sustained aerial siege, is located near Beit Lahia and Beit Hanun. The siege is imposed by constant aerial presence via F16, drones, Apache helicopters and heavy artillery shelling. The planes flying over civilian areas regularly break the sound barrier, causing a ‘sonicboom’and widespread panic among children and have resulted in a 30-40 percent increase in the number of miscarriages.(5)

Military planes have dropped pamphlets warning that Israeli military forces were imposing a ‘no-go’ area in order to counter Qassam attacks and that anyone in these areas after 6 p.m. risks being shot. The Israeli occupying forces impute responsibility for any injury, not to the Israeli Air Forces (IAF), but to Palestinian fighters launching Qassam rockets.

In addition to the constant aerial and artillery presence, MK Yuval Steinitz, chairman of the Knesset Foreign Affairs and Defense Committee said he “would not rule out cutting off electricity to the Gaza Strip.” In fact, this practice has already started. On Tuesday, 27 December 2005, helicopters fired numerous missiles over Palestinian civilian areas, cutting the electricity during the attack.

‘Military flexibility’ seems to mean that there are no limits to measures the occupying power is willing to use to subdue the Palestinian people.

What is most surprising is not the new found liberty of maneuver of the Israeli military forces, the targeting of civilian areas, or the imposition of an aerial siege, but the fact that the occupying power thinks it is not responsible for human rights and humanitarian violations.

Politically, Israeli officials hope that by making life for Palestinian civilians unbearable they will pressure fighters to stop launching Qassam rockets. Legally, the pamphlets aim to absolve the occupying forces of any responsibility for injury. This may be a reaction to the increasing number of lawsuits filed in the United States and Europe against Israeli officials for war crimes and crimes against humanity. (For more information on recent cases, see box “Seeking Justice: Two more lawsuits against Israeli officials.”)

The distribution of ‘warning’ leaflets is part of a broader strategy to legally absolve individuals in the Israeli armed forces of responsibility for their actions. An indicator that the leaflet distribution is part of a wider strategy and not an isolated event is a concurrent development in Israeli law: the recently approved anti-compensation law (July 2005 amendment to the 2002 Civil Wrongs [Liability of State] Law).(6) This law renders lawsuits for damage caused by occupation forces or its agents since September 2000 nearly impossible within Israeli courts. The law prohibits an individual considered a national of an “enemy state,” a member of a “terrorist” organization or a person injured in a “conflictzone”during“wartimeactions”from seeking compensation in an Israeli court for harm inflicted by state agents. “War time actions” are defined very broadly and include“ any action of combating terror, hostile actions, or insurrection, and also actions undertaken with the stated intent to prevent terror and hostile acts and insurrection committed in circumstances of danger to life or limb”. Moreover, the law grants wide discretion to the Minister of Interior to determine whether a claim was located in a conflict zone.

Can the ‘warning’ pamphlets distributed by the occupying forces shield Israeli officials from prosecution? Clearly, the answer is no. There is no doubt that alerting civilians of upcoming attacks is in accordance with the laws of war, especially when the attack may affect civilians, but the attacks must also be lawful. Moreover, in this case, alerting civilians means little, as their freedom of movement is so severely impeded that they may be unable to seek shelter elsewhere.

Targeting civilians or civilian objects (i.e.. undefended house and school buildings) constitutes an unlawful attack, as they are not military objectives, and is in violation of international humanitarian and human rights law. Protection of civilians is obligatory, “even if the adverse party violates these prohibitions”.(8) Injury caused to civilians or civilian objects (i.e. collateral damage) as a result of a legitimate attack - attacks against a military objective - does not render the attack illegal.(9) However, if an attack is judged militarily unnecessary, causes indiscriminate and/or disproportionate injury to civilians and civilian property, the attack will be unlawful and may amount to war crimes or crimes against humanity.

Cutting the electricity supply to the Gaza Strip, a measure detrimental to the population, is also clearly a violation of international humanitarian law as it constitutes collective punishment. Prohibition of collective punishment is based on the principle that a person cannot be punished for a crime that they have not personally committed. Human Rights Watch clearly stated, in a letter dated 23 December 2005,

cutting electricity to the entire population of Gaza violates a basic principle of international humanitarian law, which restricts a government that has effective control over a territory from attacking or withholding objects essential to the survival of the civilian population. Such an act would also violate Israel’s duty as an occupying power to safeguard the health and welfare of the occupied population.(10)

International law has the potential to provide a tool for Palestinians to seek justice for violations of human rights and humanitarian law and raise awareness to their cause.

Attacks and reprisals against civilians are prohibited, as are militarily unnecessary, indiscriminate, and disproportionate attacks. It is on the basis of these principles that Israeli officials will be judged, either in foreign national courts or the International Criminal Court. Depending on how international and national courts respond, Palestinians may develop strategies to address also Israel’s policy of discrimination, colonization and apartheid.

Karine Mac Allister is the coordinator of BADIL legal advocacy: This email address is being protected from spambots. You need JavaScript enabled to view it.

(6) For further information see Hussein Abu Hussein and Zaha Hassan, “Israel: No Longer Willing to Foot the Bill for War Crimes and Negligence”, al-Majdal No. 26.

More in this category: « Highlights, Boycott-Divestment-Sanctions (BDS) against Israel, 2005–January 2006
back to top