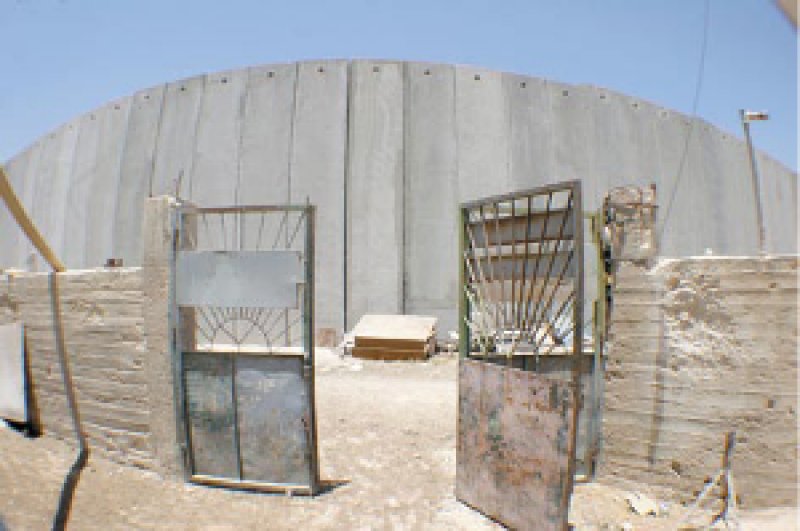 It was the single fact that mobilized me to work again in the political realm – with the return of this man, we were lost, again. One could not let his return be witnessed without an active daily resistance to it and to the fate he had in store for us. 1

Having lived in Beirut with my family and friends, and having worked, and fought, and unexpectedly stayed alive throughout the Israeli invasion that he engineered, in the spring and summer of 1982, there was no doubt what he had in store for us when he began his final climb back to power. And just so: in the spring of 2001 he replayed his dark arts across the West Bank and Gaza, a mad echo of his practices of twenty years before in Lebanon: the assassination and destruction of the fighters, the local defence committees, the refugee camps, the women and children and young men dead, our buildings demolished, our institutional infrastructure, our records, our art, broken, gone. And, of course, our leadership, encircled and besieged. If he destroyed our leader, he believed he would destroy our collective aspirations for freedom, and for an independent Palestine. His epic vision of our destiny was quite simply one of apocalyptic proportions: he was no politician, nor elder statesmen. To us, he was the classic military conqueror and adventurer. We never found him “controversial”, nor his motives opaque. He never left us guessing. His practices, his aims, his intentions were made clear through his policies. Every Palestinian man woman and child witnessed, lived, or died under that vision, and they each understood it well.

But during the 2001 war Sharon launched against our people in the second intifada, the generation of 1982 that I was part of were more scattered, further flung to the four continents, farther away from being able to do anything to help, even more powerless than before. So to those of us who had fought in those earlier battles and were still living, his return did something more cruel than simply bring back haunting reminders of those days, and how many friends had died. It changed the look of what we did, our luck, our motives, of how we had failed to stop him when younger. Sharon shapes everything for us: young, or old, in exile, or at home in an Israeli prison under occupation. He is emblematic of our condition; worse than emblematic, it is his very fist we feel. To this day I cannot watch him on television, but must avert my eyes at the immense presence of this avatar – there is no one else that evokes this terrible reaction. I know it is shared by Palestinians everywhere, especially the survivors of the Sabra and Shatila massacres, for which, let us not forget, he was culpable, according even to an Israeli tribunal, the Kahan Commission. They recommended that he never be allowed to return to public office.

To us, to me, his mission had always been thus: to kill our resistance, our organizations, our solidarity, our institutions, and above all our national liberation movement. He did not want us to have a national framework, his desire was to reduce us to small quarrelling groups and factions trapped under his prison rule, disorganized, disintegrated, or co-opted; he planned actively and provocatively (and carefully) to create such an impoverishment of our people’s public and private life. This he did through the iron tools of military rule: assassination, imprisonment, violent military invasion. His fate for us was a Hobbesian vision of an anarchic society: truncated, violent, powerless, destroyed, cowed, ruled by disparate militias, gangs, religious ideologues and extremists, broken up into ethnic and religious tribalism, and co-opted collaborationists. Look to the Iraq of today: that is what he had in store for us, and he has nearly achieved it.

His great skill was breaking ceasefires. Whenever he felt cornered to make apolitical concession to wards peace, he sought to provoke an inevitable response, which could then be used to advance his military aims, and free his hands to expand settlements, expropriate land in East Jerusalem and the West Bank. He never cared for Gaza, it was a military asset. Indeed, he won internationally uncontested control of the West Bank (which was always his goal), by withdrawing from Gaza. An empty gesture anyway: in practice it is still owned and run by Israel, but now turned into a tragedy of heartbreaking proportions, a destroyed place, corrupted beyond description by the devastation of Israel’s terrible role there since 1967.

We Palestinians saw how well he understood the West, how far he could push it – he had an almost magical ability to measure how craven the response could be to his violations of common decency and international law, how much he could get away with. He would test, and test the limits of his actions: would he get a red light? Would the Americans stop him? I watched him at this, day after day during the invasion of Lebanon in 1982, from besieged Beirut, which was in flames. Every time he would break the ceasefire, break his words to the Americans. We could see his handling of the West because we, on the other side of this equation, were waiting, hearts in mouths, for international protection, intervention, help of any kind not to be left at his mercy. We understood him well, could read him like a book. How many times in these last years did he break the ceasefire in Gaza through a provocative assassination, an aerial assault, a military raid killing dozens of civilians in order to provoke Hamas to attack Israel? His pattern was set in stone, a stone around our necks.

He began his military career, if career one can call it, in the notorious Unit 101 during the 1950s, murdering and massacring Palestinian refugees in Jordan that were trying to quietly return back to their homes, from where they had been violently expelled in 1947 and 1948. He held to this path, he never swerved. But he will forever be remembered by me, by all of us, as the man who was responsible for the massacres of thousands of civilians in the refugee camps of Sabra and Shatila in Beirut in September of 1982. Two summers ago, I went back to Shatila Camp where I had lived and worked for so many years, the firsttimesince1982,andI have returned many times in the last two and a half years. Twenty three years ago we had been evacuated from the city, with the rest of the PLO, at the end of the siege of Beirut, and only two weeks before the massacres. But we only agreed to leave with international guarantees in place that the civilian refugee camps would be protected from the fascist Lebanese militias. Instead Sharon broke the US brokered deal, invaded Beirut (which he could not take while we were there), surrounded the refugee camps, prevented anyone from leaving, and had his armed forced light up the night sky with flares, while the Lebanese militia did their work with knives and axes and guns, day after day. He let busloads of them in, no Palestinians allowed out. In Sweden, in Denmark, in the cities of Malmo, and Copenhagen, Uppsala and Stockholm, now live thousands of Palestinian refugees from Lebanon, many of whom are from Shatila or Sabra, the survivors of that massacre. I have talked a lot with these old friends about those days. What it meant to have left under orders, what it meant to have been trapped behind. For those that had to stay behind when the fighters left, you see, already understood Sharon well.

Dr. Karma Nabulsi was a PLO representative in Beirut, Tunis and London, as well as at the UN, between 1978 and 1990, and an advisory member of the Palestinian delegation to the peace talks between 1991 – 1993. She currently teaches at Oxford University.

(1) An edited version of this article appeared in the Guardian on 6 January, 2006.

More in this category: « Final Statement Hamas Election Victory – a Call for Good »
back to top