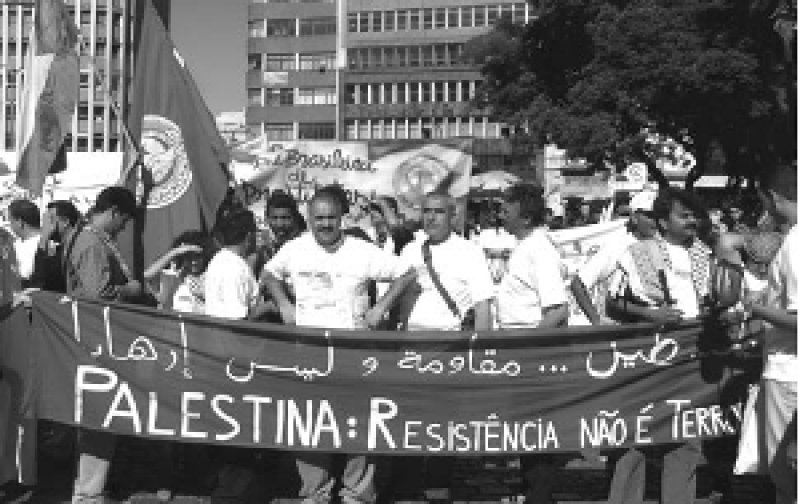 
Every year hundreds of thousands of people come to the annual World Social Forum (WSF) to advance an alternative approach to the economic, political and military agenda of states meeting at the annual World Economic Forum (WEF) in Davos, Switzerland. The 2005 WSF returned to Porto Alegre, Brazil - the site of its birth five years ago as Brazilians enthusiastically welcomed a process of political change in the country.

Between 26-31 January some 100,000 people from all around the world, members of thousands of social movements, popular initiatives and non-governmental organizations (NGOs), gathered in a large tent camp on the banks of the Rio Grande river to remind wealthy and powerful state actors that the dream of and demand for a better, more just and peaceful world remains unbroken.

A delegation from the Occupied Palestine and Syrian Golan Heights Advocacy Initiative (OPGAI) travelled to Brazil to learn more about the WSF and garner support for the Palestinian struggle for freedom and a broad Israel boycott-divestment-sanctions campaign. The delegation comprised nine Palestinian NGOs from the 1967 occupied Palestinian territories (OPT) and the Golan for Development Association.

WSF participants expressed overwhelming empathy with the Palestinian people. Spectators cheered the Palestinian delegation in the opening march. Brazilian unionists joined in a powerful demonstration of support for the Palestinian struggle organized by the Palestinian community in Brazil. Thousands of visitors frequented the “Palestine House”, an information and meeting tent, to collect information and purchase kuffiyas and posters. And a large crowd enthusiastically dismantled a mock Israeli apartheid wall.

The fifth World Social Forum, however, also raised unresolved questions regarding structures and strategies for effective global mobilization and campaigning. The experience of the Palestinian OPGAI delegation may serve as an illustrative example of the challenges ahead.

People unite, but what exactly unites them?

The World Social Forum was conceptualized as a space to meet, exchange ideas and strategies, and build partnerships. It is not a movement in and of itself. Every organization is free to participate and organize activities. Social movements, unions and NGOs determine the program through activities and statements; however, no one is permitted to issue statements on behalf of the Forum. WSF institutions – the International Council, the Secretariat in the host country, and regional Social Forums - only provide logistical support.

This openness is supposed to encourage inclusiveness and maximum participation. But it appears to have a price. There are no standard criteria for WSF participation, such as adherence to principles of international law and UN resolutions. Oppressed and marginalized peoples who come to the Forum to build broader support for their causes may thus find themselves harassed by parties interested in de-legitimizing and obstructing their struggles.

In the Palestinian case, for example, workshops dedicated to Israeli-Palestinian peace at the fifth World Social Forum included a Spanish Zionist university teacher who confronted her audience with blatant racist and right-wing Zionist language. Members of the Zionist Jewish community in Brazil, waving Israeli flags, also participated in the WSF opening march.

“Global concern” or a new form of domination?

The World Social Forum and campaigns initiated by social movements worldwide are characterized as an expression of new “global awareness and concern”. The notion of “global citizenship” has replaced the political ideology and activism of the past. Today people are citizens of the world. Freedom, justice and peace – whether in South-East Asia, the Americas, Iraq, Palestine or elsewhere – is everyone's business.

Alongside workshops organized by the Palestinian delegation from OPGAI and anti-Zionist activists from Israel and abroad, a variety of well-intended (and not so well-intended) groups initiated workshops about Israeli-Palestinian peace and conflict resolution and debates based on the parameters of the Geneva Initiative. Palestinian participants were somewhat unprepared for and surprised by this new mode of action. No longer was there a solidarity movement eager to listen to Palestinian reports, analysis of needs and suggestions.

Non-Palestinian WSF and social movement veterans also took the lead in setting the agenda of the strategy debate and in drafting language on Palestine in the final statements of the Anti-War Movement Assembly and the Assembly of Social Movements. The debate in these assemblies thus appeared to be dominated by priorities and constraints of political activism in Europe. Calls by Palestinian delegates to isolate Israel and for a clear distinction between anti-Zionist/anti-colonialist Israeli allies and an undefined “Israeli Jewish peace movement” were perceived as a nuisance.

We support the Palestinian people's struggle for justice, self-determination, a sovereign independent state with Jerusalem as its capital and the implementation of the right of return in accordance with UN Resolution 194.

We call upon the international community and governments to impose political and economic sanctions on Israel, including an embargo on armaments. We call upon the social movements to mobilize also for divestment and boycotts. These efforts aim to force Israeli to implement international resolutions, and the advisory opinion of the International Court of Justice, to stop and take down the illegal wall and end all occupation and apartheid policies.

We support the Israeli anti-colonialist, anti-Zionist activists who share this struggle.

Democracy and popular participation is at the core of the WSF and social movements worldwide. Ironically, some global and regional social forums and activist assemblies lack democratic structures and decision-making mechanisms. The WSF International Council, for example, is composed of some 100 unions, movements and NGOs selected according to geographic criteria by the WSF “founding fathers and mothers”. There is no procedure for the replacement of old and/or recruitment of new members to regional and global institutions.

Policy decisions, calls for action and statements by the Assembly of Social Movements and the Anti-War Movement Assembly are made by consensus. At WSF-5, however, few people appeared to be informed about the place and time of decision-making. No draft documents were made available to the large crowd who came to listen and 'approve' the final statements of both Assemblies. Veteran organizers acknowledge the problems associated with this decision-making process, but argue that nothing can be changed without endangering the movement as a whole.

The role of Palestinian participation

Representatives of Palestinian NGOs and political groups have participated in all WSFs and in numerous regional meetings of the global social movement. The 1967 OPT-based Palestinian NGO network (PNGO) and the Alternative Information Center (AIC) are both members of the WSF International Council. On the whole, however, Palestinian participation has been restricted to the elites of Palestinian civil society.

Little effort has been made to inform Palestinian civil society back home, to encourage broader popular involvement in preparations for and follow-up on global and regional social fora, or to compose Palestinian delegations able to intervene based on a collective agenda. As a result, Palestinian civil society has remained largely uninformed about the existence and activities of the global social movement, its dynamics and opportunities offered for global alliance-building.

The participation of the OPGAI delegation in WSF-5 has helped bring lessons and ideas forward; their application, however, will require a concerted and sustained effort by a broad range of Palestinian civil society actors, including veterans and newcomers to the global social movement.

The OPGAI statement and call for action is reproduced in the document section of this issue.

Ingrid Jaradat Gassner is the Director of BADIL Resource Center.

Al-Awda, the Palestine Right to Return Coalition held its Third Annual International Convention at the University of California in Los Angeles on the weekend of 15-17 April 2005. The convention entitled "Empowering the Palestine Right to Return Movement" was attended by hundreds of activists from the US, Canada and elsewhere, who came together to learn, discuss and share their ideas at a time when our voices are needed most.

The convention featured keynote Palestinian speakers from Lebanon and Palestine, as well as a former political prisoner. The day-long organizing and strategizing workshops on Saturday followed the plenary session which included Dr. Saree Makdisi, Dr. George Bisharat and Elias Rashmawi. The workshops dealt with topics ranging from cultural, youth, women and student organizing, to developing Al-Awda chapters, campaigns related to divestment, media and Palestinian political prisoners, among others. Some of these workshops have already begun to implement their work plans and resolutions.

The Friday night opening session was followed by outstanding spoken word performances featuring Mark Gonzalez, Jade, Ahmed and Shaheed. A Palestinian cultural night special event capped the second day of the convention. At this event, participants enjoyed an evening of poetry, folkloric dabke dance performed by the youth of Beir Zeit Society of Southern California, music by world famous maestro and violinist Dr. Nabil Azzam, and Palestinian and Arab nationalist songs by gifted Palestinian singer Worood who mesmerized the crowd especially with her rendition of Fairuz's "One Day We Shall Return". This was followed by a Palestinian fashion show and readings of essays from children in the refugee camps. In addition, the Saturday night event featured "Palestine: The Exodus & The Odyssey", an outstanding exhibit by Palestinian artist Ismail Shammout. On Sunday morning, a general meeting was held in which the results of the workshop deliberations and resolutions were shared and discussed further.

More in this category: « Editorial : Gaza Disengagement, Ongoing Displacement Refugees Run their Own Needs Assessment »
back to top