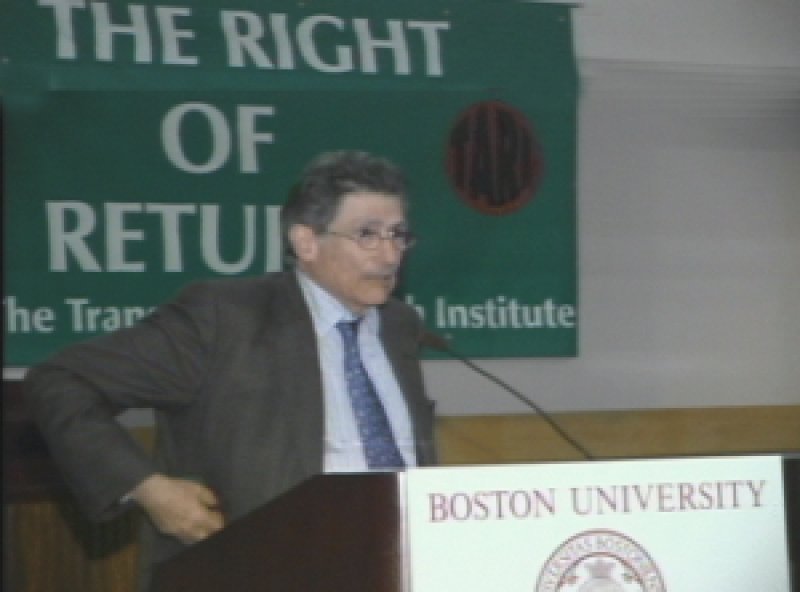 For Israeli Jews, like myself, [Edward Said] was the lighthouse that navigated us out of the darkness and confusion of growing up in a Zionist state onto a safe coast of reason, morality and consciousness…. A few weeks ago we had our last meaningful conversation on the phone - in which he beseeched me, as he did others I am sure, not to give up the struggle for relocating the Palestinian refugee issue at the heart of the public and global agenda. He stressed the need to continue the effort of changing American public opinion on Palestine and he was very hopeful and encouraged by what he recognized as a significant change in European public opinion. Edward probably left more than one spiritual and moral will to us.
The one I am taking is the one above. In his memory and out of respect to his intellectual genious as well as to his moral courage, we should regroup our energies and reorganize our efforts to impress on the world that there will be no justice and no peace in Palestine, no stability in the Middle East and no tranquility in the US relationship with the Muslim world, without the return of Palestinian refugees to their home, the end of the Israeli occupation of the West Bank and the Gaza Strip and the building of a state in Palestine that would respect human and civil rights, as did Edward all his life.
Dr. Illan Pappe
Edward Said conquered death by his daily contribution to the cultural monuments of our human values, and he will stay a brilliant shrine and a marvelous example of the strength of the will for our oppressed people against the huge dark powers who try to suppress and cancel our dreams and our rights to exist on equal footing with other people of the earth.
Palestine with Edward Said was more rich, wide, critical, humane and sublime. Palestine without Edward Said is, different, sad, missing one of its loyal voices who carried freedom's symphony to the four corners of the world. With said, Orientalism as methodology was changed forever, while the orient and its people were empowered with more knowledge to their richness and rootedness. With Said, Palestinians and Israelis had a vision for a better future: personified by the long cooperation with his Jewish musician Daniel Barenboim, with whom he established a common group of more than 200 hundred Israeli and Palestinian young musicians, playing together Beethoven and Mozart…With Said culture, knowledge and power had different connotations where culture as seen as a built symphony with all its variation, rather than the short minded Samuel Huntington's thesis of the clash of civilizations.
With Said, universities and streets, the 'intellectual' and the 'normal' are one, philosophy, politics, art, music and thought are variations of the same humanity. With Said, Marx, Conrad, Gramsci and Foucault were reread differently: by crossing the borders of different disciplines and connecting knowledge, to power to representation to decolonization processes in the third world.
Dr. Mahmoud Issa

More in this category: « In Memoriam Refugee Protection »
back to top