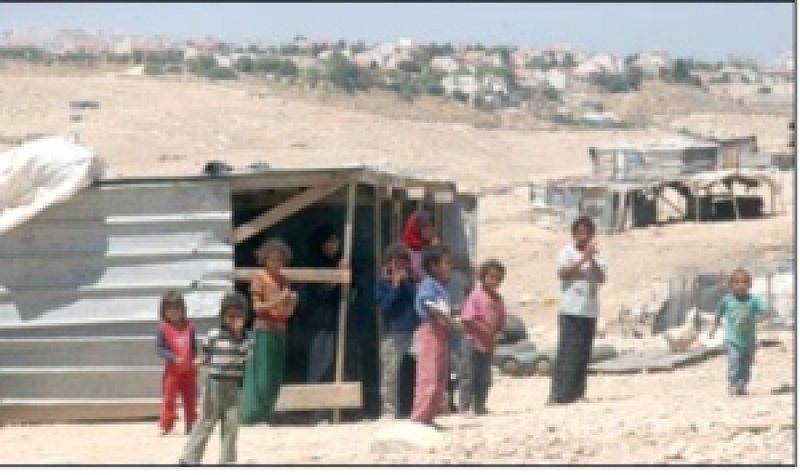 Today, Arab Jahalin is the largest group of Palestinian Bedouin in the West Bank, both in terms of the large area of land they inhabit and in terms of population, which numbers around 7,500. The forced displacement of Arab Jahalin began in the Naqab in 1948, and continued throughout the 1970s until the present day, and now threatens the very existence of the community.

Every time a new Jewish settlement is established or an existing one is expanded, expulsion of the indigenous Bedouin communities, including Arab Jahalin, follows. Furthermore, due to the fact that the Jahalin are spread around Jerusalem, they are harshly affected by the construction of the Wall and the continued expansion of the settlements. Thus, for Arab Jahalin the Nakba – the mass displacement of Palestinians from historic Palestine in 1948 – has never ended.
Not much has been written about Arab Jahalin and the available literature largely ignores the historical dimension of their current plight. The report Arab Jahalin: from the Nakba to the Wall published by the Anti-Apartheid Wall Campaign, however, provides a historical timeline for the displacement of the Arab Jahalin, who originally were expelled from the Naqab to eastern Bethlehem and Hebron. From there they moved to the hills south and east of Jerusalem, as well as areas in the Jordan Valley. After the occupation of the West Bank and Gaza by the Israeli forces in 1967, some of the Jahalin families fled to Jordan while those who remained in Jerusalem were, and still are, pushed by the Israeli military in the direction of Palestinian villages and towns, such as Abu Dis, al-‘Eizariya, al-‘Isawiya and Anata. Therefore, the above-mentioned report constitutes a great effort at casting light on the ongoing forcible displacement of the Jahalin Bedouin, which has been carried out by the Israeli military over the past 61 years.

The Jahalin Bedouin and the 1948 Nakba

Before the founding of the State of Israel, Jahalin Bedouin were spread throughout the Tal ‘Arad area north of Beersheba in the Naqab. The Arab Jahalin, like other Bedouin communities in Palestine, are semi-nomadic. Historically, they have relied on animal husbandry while simultaneously engaging in agricultural activities in years of adequate rainfall. The Jahalin permanently resided in certain areas, and did not leave these areas, except for short periods in order to graze their herds. Thus, they had a right to live and graze their animal on the lands that they traditionally inhabited, irrespective of whether or not they hold documents proving private land ownership. Legally, the battle fought by indigenous peoples around the globe has won recognition by the UN that land rights are not based on a narrow conception of private property.

More in this category: « Al-Naqab: The Ongoing Displacement of Palestine's Southern Bedouin Jerusalem: A Displacement Master Plan - Interview with Khalil Tafakji »
back to top