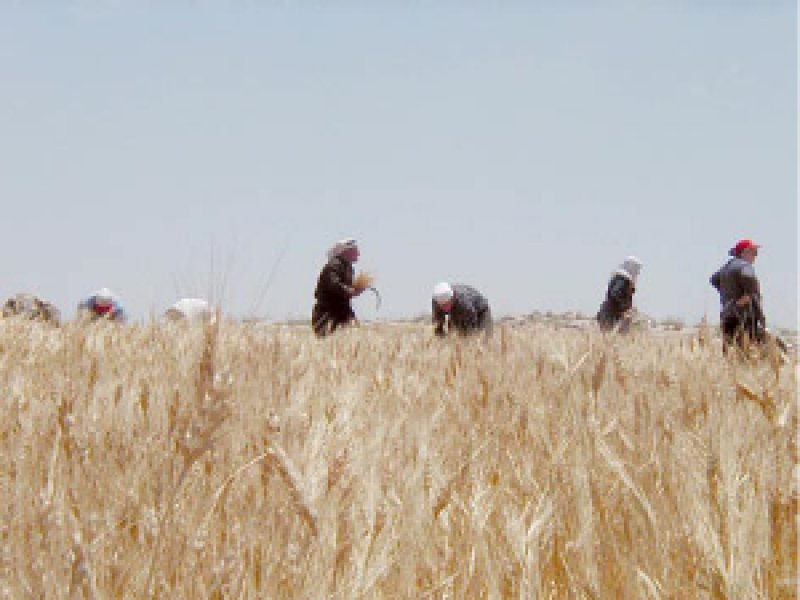 It is no longer disputed, at least by those close to the ‘facts on the ground’, that Israel’s West Bank settlements have expanded to the point of eliminating the contiguous territory necessary to establishing a viable Palestinian state. On this understanding, even the Bush administration’s ‘road map’ assumes that substantial withdrawal of these settlements is necessary to a viable two-state solution.

But the West Bank settlements continue to expand, and the 620-kilometer route of the wall indicates that they will soon sculpt Palestinian territory into enclaves amounting to some 54 percent of the West Bank. Statements given by Ariel Sharon confirming this plan and passive complicity by the Bush administration affirm that the two-state solution must be accepted as dead. The question is no longer whether Israel has absorbed the entire territory between the sea and the Jordan River within its de facto sovereign authority but rather what kind of political situation is going to emerge from that control.

Sharon’s own statements suggest Israel’s own plan: an expanded Jewish state that will hold a Bantustan-like archipelago of Palestinian cantons (eventually declared a ‘state’) tucked within its boundaries. Analysts like economist Sara Roy, report that this plan will only concretize Israel’s continuing control over borders, infrastructure, labour flows, sea and air space, security and the currency, precluding meaning full Palestinian sovereignty, development, or any effective administration. Only one alternative to this future seems apparent and is therefore seizing the imagination of Jews and Palestinians alike: re-imagining the territory as one secular state. In the corollary democratization campaign, the Palestinian movement would insist on the rights of the state’s indigenous people to representation in the central government. Ethnic tension could then be resolved within a constitutional democratic process, on a model reminiscent of the historic effort in South Africa.

Several obstacles seem so powerfully to cripple a one-state solution, however, that many still consider it unviable. The most obvious obstacle is articulated immediately by all sides: that Jewish Israelis will never accept it. Zionists also hold that, although Palestinians and the Arab/Muslim world may give it lip service, they would not truly accept it either, and would only use democratization to throw Jews into the sea as they have long dreamed of doing. In any case Zionists maintain that a one-state solution would certainly ‘destroy the Jewish state’ by introducing a Palestinian-Arab majority into the electorate. Since full democratization of Israel would indeed ‘destroy the Jewish state’ in the sense of dismantling the discriminatory laws that now secure Jewish dominion in the state’s governance, this fear fuses anti-Zionism and anti-Semitism sufficiently to make it especially emotional and especially hard to tackle.

I would never contend that Palestinians, or the Arab world, or the Muslim world, must expend endless energies trying vainly to satisfy Jewish-Zionist fears born mostly of Zionist propaganda that is both racist and grossly distorts the diplomatic record (which has been replete with serious Arab peace offers). Nor would I load Palestinians with the primary burden of extricating themselves from Israeli occupation. Zionism is the originating framing condition for this conflict, due to its insistence on Jewish statehood, and it is in Zionism that we must seek the heart of the solution. Nearly half of my book, The One-State Solution, is dedicated to critiquing the moral, political, ideological, and psychological dimensions of classic Zionist insistence that the Jewish ‘national home’ requires a Jewish ‘state.’

Still, in confronting the death of the two-state solution, Palestinians do clearly face their own moral and political dilemmas. They are indeed the only ones capable of redefining the fundamental terms of the conflict. And the first step in shifting to a democratization campaign, should they undertake that effort, must be to clarify their collective understanding—values, ethics, pragmatic intent—regarding the modern Jewish presence in Israel. It is the Zionist claim that Palestinians and Arabs are unwilling to “share” the land with Jews that bolsters Zionist rationalizations and self-exonerations. Some dismiss this charge, but indeed the answer has become unclear even among Palestinians.

Palestinian debate to clarify consensus on this point will reflect a deep history. Their original goal was indeed to form one independent “Arab” nation-state between the Jordan River and the sea, a vision endorsed by the League of Nations when it confirmed the British Mandate in the inter-war period. Zionism countered with Jewish ethnic nationalism, holding that the Jewish ‘nation’ had the right to self-determination in the same territory. In mainstream Zionist logic, a Jewish ‘nation’ required a Jewish “state” and therefore a Jewish majority. A unified or ‘binational state’ was denounced by main stream Zionists like Ben Gurion as an insupportable threat to a vigorous and authentic Jewish-national life in Palestine.

After Israel’s independence, however, old racial nationalisms in Europe yielded increasingly to multi-ethnic values, and the initial Zionist stance of blatant ethnic chauvinism no longer rang so persuasive. By the 1960s, Zionist apologists were therefore asserting that Israel was required to form as a Jewish state because no ‘Arab partner’ could be found to endorse the binational models urged by early Zionists like Martin Buber.

Fortunately for Palestinians, that narrative is empirically false. For one thing, Palestinian diplomacy endorsed a single multi-ethnic and multi-confessional (if ‘Arab’) state throughout the early twentieth century. For another, in 1947, the Muslim and/or Arab governments of Afghanistan, Egypt, Iraq, Lebanon, Pakistan, Saudi Arabia, Syria and Yemen all went on record to endorse a unified secular-democratic state solution in Palestine, when they served as members of a UN subcommittee considering alternatives to partition. The Subcommittee’s final report even endorsed the legality of a Jewish ‘national home’ in Palestine because it accorded with the terms of the British Mandate, although it insisted that the new state’s constitution secure equal rights for all citizens (see the text in Walid Khalidi’s From Haven to Conquest). That history raises a challenge: can Palestinians today endorse the plan proposed by the Arab states in 1947—one secular democratic state that ensures equal rights for the territory’s entire population while making ideological room for the ‘Jewish national home?’

To consider that question, Palestinians everywhere would need to debate freshly and honestly what political goals and values now matter to them as a national society. One way to undertake that project might be to review the outdated PLO Charter. The Charter was secular-democratic in ethos, and based its understanding of ‘Palestinian’ on indigenous origins in the land, embracing all religious sects and ethnic groups including Jewish residents of Palestine as ‘Palestinians.’ Still, the Charter also sustained pre-1948 Palestinian discourse by affirming that Palestinian nationalism was based on an “Arab” identity, reflecting the pan-Arabism then still in vogue and the Arab character of Palestinian culture. Hence, although Palestinian nationalism was always pluralist regarding religion, its ethnic concepts were murky: how “Jewish” fit into “Arab” was never entirely clear (as it was not clear in Europe’s ethnic nations), and the Charter was not clear what might befall Jews who had come into Palestine through the Zionist immigration.

But today, Israel’s entire Jewish-Israeli population of some four million people has effectively become indigenous to Palestine, in that most Israeli Jews believe it to be their homeland and have no other. This ‘fact on the ground’ requires Palestinians to rethink the kind of nation their campaign can—and should—seek to create, and especially the old distinction between indigenous and immigrant Jews.

That challenge would seem to require a particularly high-minded vision of ethnic coexistence, such as in South Africa. It is a common myth today that the anti-apartheid movement always accepted the white and Afrikaner population of South Africa as national brethren. In fact, black nationalism had many adherents and formed a vigorous strand of the anti-apartheid struggle. But the ANC official position came to endorse the vision of a multi-racial nation, based on the understanding that no peaceful and promising future could be found except in a shared state. Explicit acceptance by Palestinians of the present Jewish-Israeli population as permanent presence in Palestine is similarly fundamental to any democratization campaign that insists on democratic equality for all the state’s citizens.

One way to build that consensus might be a collective project to write a new charter, possibly along the lines of the ‘Freedom Charter’ in South Africa. Written in 1955, the Freedom Charter’s opening passages should resonate for Palestinians today:

‘We, the People of South Africa, declare for all our country and the world to know:

1. that South Africa belongs to all who live in it, black and white, and that no government can justly claim authority unless it is based on the will of all the people;

2. that our people have been robbed of their birthright to land, liberty and peace by a form of government founded on injustice and inequality;

3. that our country will never be prosperous or free until all our people live in brotherhood, enjoying equal rights and opportunities;

4. that only a democratic state, based on the will of all the people, can secure to all their birthright without distinction of colour, race, sex or belief;

5. And therefore, we, the people of South Africa, black and white together equals, countrymen and brothers adopt this Freedom Charter;

6. And we pledge ourselves to strive together, sparing neither strength nor courage, until the democratic changes here set out have been won.’

Composing such a charter would challenge the very heart of the conflict: Zionist fears, myths, bigotry, and complacency. In order to accept that full democracy offers the only peaceful future for the ‘Jewish national home,’ Israeli Jews must first recognize that their own national narrative has been based on a cluster of lies and nationalist myths and that the consequences of the Nakba are permanent and irreducible facts for Israeli life. But to revise their national narrative and ideology—a process highly fraught, divisive, and upsetting for any national population—they must also experience economic and moral pressure sufficient to leverage their willingness to do so. Some of this pressure can come from an international campaign to boycott, sanction, and divest from Israel. But the moral leadership must come from the Palestinians. To gain such moral authority, any population must clarify, first for themselves and then for the world, the vision of the future they themselves wish to embrace. What vision will the Palestinians redeem from the ruin of Oslo? At the least, they will need to find it soon, before the Bantustan strategy breaks up their political unity along with their territory.
------------------------------------------------------
Virginia Tilley is Associate Professor of Political Science at Hobart and William Smith Colleges.

More in this category: « Between the One-State and the Two-State Solution Planning for the Future - UNRWA Begin’s to Implement Agency Reforms »
back to top