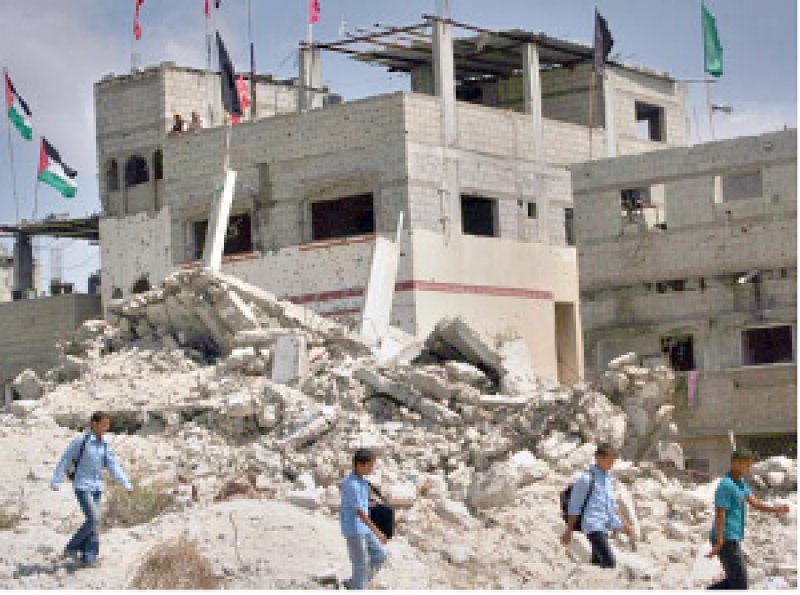 Sharon has rather offered an incomplete solution, a Palestinian state in the Gaza Strip and in 40 - 50 percent of the West Bank. Israel will maintain control over this disfigured entity and use brutal force in the event Palestinians overstep limits defined by Israel. If we, as Palestinians, believe that what Israel offers at this stage does not fulfill, even in the best case scenario, any of the Palestinian national aspirations, we must develop a solution that challenges Sharon’s intentions according to higher human and ethical values than what the Israeli solution offers. Although the facts are as clear and bright as the sun in Palestine’s summer sky for the Palestinian leadership, and possibly, for the majority of Palestinians, they continue to buy into a two-state solution. The supporters of the binational state must insist on presenting their vision as a Palestinian alternative to the two-state solution in the inevitable case the latter does not succeed. Not presenting any strategic alternative would be tantamount to encouraging acceptance of Sharon’s solution based upon arguments of pragmatism and acceding to international pressure.

The binational solution is possible and desirable if we take the following points into consideration:

First: The binational solution should not be presented as a plan to be implemented immediately. It should be presented as a long-term solution that has to be developed in case the independent, sovereign Palestinian state in the Gaza Strip and West Bank reaches a dead end. Some point out that the binational solution is theoretical and cannot be implemented. If this is true, what then is the solution that can be implemented? We honestly have to answer the following question: Is the establishment of a Palestinian state on the entire West Bank and Gaza Strip still possible? Answering this question is one way to reach the conclusion that a binational state is more realistic than a Palestinian national state. Simply because, on the one hand, the national state in the West Bank and Gaza Strip is only possible if the Palestinians accept an incomplete state on part of the 1967 occupied land. On the other hand, it is clear that the reality of historic Palestine is a binational reality, which has to be developed and translated into a political structure which provides equality for both Israelis and Palestinians.

Third: Supporters of a Palestinian national state in the West Bank and Gaza Strip assume that Palestinian refugees who live in neighboring Arab states will be able to solve their problems in Israel, or may, at a later stage, immigrate to the future Palestinian state. However, this is impossible based on the following considerations:

Israel has conditioned the establishment of a Palestinian state with Palestinian acceptance that it cannot open the doors to Palestinian refugees due to demographic concerns.

The majority of the refugees were displaced from territories which are now located in Israel.

Palestinian refugees are still suffering from harsh discriminatory policies in their countries of exile in the Arab world and are looking for a way out of their crisis. Otherwise, how do we explain the migration of a great numbers of refugee youths to western states, especially Europe, in the past few years?

Taking the above into consideration, we must search for a political solution to the Palestinian issue that guarantees the refugees, at least theoretically, the possibility to return to their homes of origin. This is only possible through a binational state built on the basis of equality. If Israel has reserved itself the right to recruit millions of immigrant “Jewish refugees” since 1948, it must allow hundreds of thousands of Palestinian refugees to return to their villages in the binational state, or at least to the area of their native village.

Some opponents of the binational state, who call for a Palestinian state in the West Bank and Gaza Strip, contend that Israel and the majority of Jews will not accept this solution because it means the end of the pure Jewish state. This is absolutely true, but we must raise two different questions:

a. Do Israel and the Jewish people agree to a sovereign Palestinian state in the West Bank and Gaza Strip? Did the call for this solution consider the approval of Israel and the Jews? Or is it presented as a solution that Israel might be forced to accept?
b. Implementation of solutions to national or ethnic conflicts has never depended on the consent of the majority or the dominant party; solutions were always forced on the dominant national group. This is how it was for all the national liberation movements including the apartheid regime in South Africa. Therefore, the development and implementation of a binational state does not require the approval of Israel at this stage, but Palestinian and Israeli acceptance at the end of the process, which might last for decades.

a.The one-state model which undermines the Palestinian national identity and the idea of the national project is the model of the secular democratic state, because the basis of the secular democratic state (one-state) is citizenship and not nationality.
b.Those who promote the idea of a secular state, meaning a Palestinian national state, not the state of the citizens regardless of their nationality or religion, are using the wrong term. They basically do not recognize a Jewish Israeli national group deserving of a national project. This position overlooks the Israeli reality. How can we deny Israelis national unity and the right to express themselves as a national group when we stand before them, jealous of how strong their community is and plead to be granted the same rights? Jewish national expression in the form of an independent Jewish state is rejected by Palestinian Arab loyal to their cause. It should, however, be accepted in a joined and equal binational state.

Calls for the establishment of a binational state must take the following points into consideration:

Israeli Jews are a national group whose cooperation is necessary in order to establish a binational state.

The creation of a binational state, regardless of when it happens, recognizes that the future of the Palestinian people is different and separate from the future of the rest of the Arab nation, i.e. it is incompatible with the notion of Arab unity or Arab completeness. Palestinians must accept an identity that fits with the binational state, without disregarding civil and cultural, but not political, interconnections with the Arab world.

Efforts towards a binational state do not necessarily require the Palestinians in the West Bank and Gaza Strip to request an Israeli identity card, as some might think. It may rather require cooperation between Israel and the Palestinian Authority (or any other Palestinian entity) in different areas of activities, through the formation of joint bodies and committees. These forms of cooperation might evolve into a binational framework towards equal citizenship and partnership at a later stage.

Dr. As’ad Ghanem is a political science professor at Haifa University. He has released several publications and research about the Arab – Israeli conflict and the Palestinians in Israel.