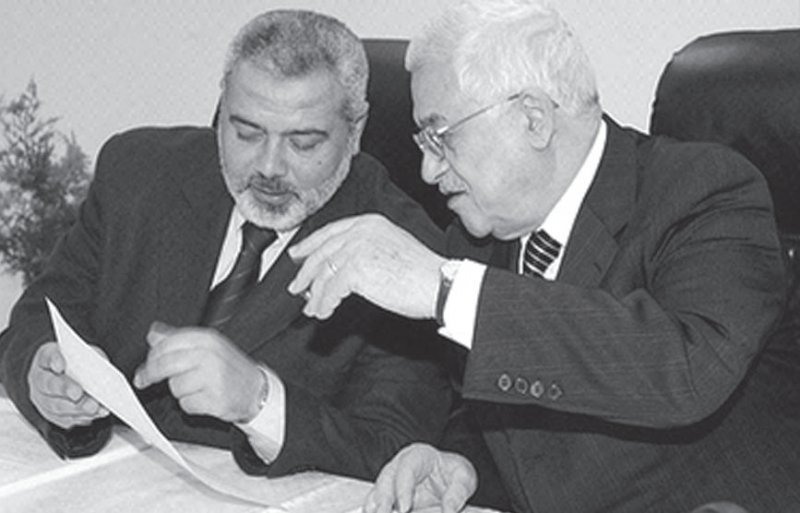 At least 60 Palestinians were killed and hundreds injured in a wave of internecine violence in the Gaza Strip in January and February 2007. “It was a surreal but telling reflection of how lonely Palestinians have become as their leadership has seemingly been pushed into breakdown and failure, while Israel watched from the sidelines,” Sami Abdel-Shafi from Gaza describes the common feeling of Palestinians to whom “it seemed sadly clear that the moral credit of their cause was being eroded...”.(1)

The above was not achieved by international sanctions alone: loss of leadership and internecine fighting might have been avoided in the absence of the overt encouragement of the electionlooser Fatah by some, foremost the United States and Britain, to reverse by force the outcome of the democratic elections in the occupied Palestinian territories. According to both Palestinian and Israeli press reports, truck loads of rifles, machine guns and ammunition have entered Gaza from Israel since October 2006, and not all of these weapons went solely to the Presidential Guard; many were sold on to the highest bidder.(2) Under the euphemism of “strengthening the Palestinian President Mahmoud Abbas and the Presidential Guard,” US President Bush Bush announced in January that US $86 million would be transferred for this purpose in the near future. All of this stirred bitterness in Gaza.

Following a series of short-lived cease-fires and inconclusive talks between Fatah and Hamas in worldly places like Gaza, Ramallah, Cairo and Damascus, the holy city of Mecca became the Palestinian leadership’s last resort for reversing collapse. The spiritual weight of the place was obliging, and, in line with a long tradition in Middle East peacemaking, a “constructivelyambiguous” formula was found for Fatah and Hamas to announce from Mecca that Palestinian unity has finally been regained. The Mecca Agreement signed in headlines on 8 February re-affirms dialogue as the only means of conflict resolution among Palestinians, provides for a mechanism towards a new unity government of the Palestinian Authority, lays out ideas for reform and activation of the PLO, and mandates the Palestinian President to conduct political negotiations with Israel.

A major part of the answer lies now with the international community and its willingness to end the isolation of the Palestinian people and enforce Israel’s compliance with international law and UN resolutions. The Mecca Agreement, which – with the broad backing of Arab regimes – has established Hamas as a political player in the Middle East, poses a challenge.

Although short of an explicit commitment to non-violence and recognition of Israel, it includes some - albeit implicit – acceptance of the Quartet’s conditions: the elected Palestinian Prime Minister Ismail Haniyeh is mandated to form and lead the new Palestinian unity government, which will “abide by the interests of the Palestinian people, preserve their rights, maintain their accomplishments and develop them and work to achieve their national goals as ratified by the PLO’s National Council [...] and respect the Arab and international resolutions and agreements signed by the PLO.”(3)

Not surprisingly, Israel has launched a global campaign of lobbying against the terms of the Palestinian unity agreement and has announced that it will not cooperate with the Palestinian unity government. Those external actors moreover, foremost the United States and the EU, who instigated the collapse of Palestinian politics, law and order in the first place, appear determined to pursue their policy of demise of the Palestinian people. Although Russia’s President Putin has been outspoken about the need to end the international sanctions regime, a tripartite meeting between US Secretary Condoleezza Rice, Israel’s Prime Minister Ehud Olmert and Palestinian President Mahmoud Abbas on 19 February, and a meeting of the Quartet on 21 February, have remained without conclusive results.

The Quartet’s official stand thus remains unchanged. In a statement issued on 2 February 2007, shortly before the Palestinian meeting in Mecca, the latter calls for Palestinian unity behind a government “committed to non-violence, recognition of Israel and acceptance of previous agreements and obligations, including the Road Map,” while remaining silent about Israel’s blatant violations of international law and UN resolutions. It also calls for the Temporary International Mechanism (TIM) – the special mechanism set up under the sanctions regime for channeling international funds to the occupied Palestinian territories by-passing the elected government - “to be further developed to support the political process.” It does so in blatant disregard of professional opinion and studies which show that TIM is wasteful,(4) ineffective, divisive and destroying the remnants of Palestinian governance institutions built with international aid in the past. The Quartet even “welcomed” US arming of the Presidential Guard as “efforts to reform the Palestinian security sector and thus to help improve law and order for the Palestinian people.” So-called optimism and commitment to the “goal of a Palestinian state living side by side in peace with Israel” is easily exposed as double-speak in this context.

[...] We insist that [the Temporary Implementation Mechanism] must be temporary and if it persists beyond the current year there is a very real risk that the Palestinian Authority may be fatally undermined. This would set back not only the realization of the Palestinian rights to govern themselves in the West Bank and Gaza but also the prospect for peace.(5)

In the longer term, the future of the Palestinian people also depends on internal unity and Palestinian capacities for reshaping the Palestinian struggle agenda outside the narrow framework of interests and privileges derived from the Palestinian Authority, whose survival is uncertain and which does not represent all of the Palestinian people. The fact that a recent Birzeit University survey among Palestinian leaders in the 1967 occupied Palestinian territories shows that 67.5 percent support a solution in form of one secular and democratic state in all of historical Palestine for all its people, as well as new initiatives by Palestinians in Israel for a state that would provide equal rights and status to all its citizens, including Internally Displaced Persons (IDPs) and refugees, provide sources of inspiration in this context.(6)

Hope for Palestinians is also found in the growing campaign of global civil society for boycott, divestment and sanctions (BDS) against Israel, and in the cracks that have started to appear as the political, economic and human cost of failed Middle East policy cause increasing concern in European and other capitals. South Africa has made a call to the UN Security Council, to the United States and the European Union to lift their economic sanctions against the Palestinian Authority, and Norway, not a member of the EU, has re-launched official cooperation with the new Palestinian government. The British parliament’s International Development Committee, moreover, recommends a fundamental change in the strategic approach towards both the Palestinian Authority and Israel:

In other situations, ways have been found of UK representatives talking to those with whom we have profound and justifiable disagreements because we talk to them in their capacity as elected representatives, not in their capacity as representatives of a particular party or faction. Finding ways of achieving this [with the Palestinian Authority] does not mean a dilution of the international community’s insistence that Israel has the unqualified right to recognition and security within legitimate borders any more than our talking to the Government of Israel means endorsing its continued occupation of East Jerusalem, the West Bank and Gaza.

The British parliamentary Committee concludes that the approach of constructive engagement with Israel has not worked and should be replaced by increased pressure on Israel to end settlement expansion, dismantle the Wall, and comply with it obligations under previous agreements, the ICJ advisory opinion and UN resolutions. As an immediate measure, the Committee recommends that “the UK should urge the EU to use the Association Agreement with Israel as a lever for change and to consider suspending the Agreement until there are further improvements in access arrangements.”(7)

Ingrid Jaradat Gassner is the director of BADIL Resource Center for Palestinian Residency and Refugee Rights, Bethlehem, Palestine: This email address is being protected from spambots. You need JavaScript enabled to view it.

money to the Palestinians is being paid to the HSBC Bank every month, it was disclosed yesterday, as agencies

accused authorities in Brussels of an “aid fiasco.” Oxfam said that Europe's efforts to bypass the Palestinian

levying the fees for transferring allowances to more than 140,000 Palestinian workers and people on low incomes.” See: http://news.independent.co.uk/world/middle_east/article2245124.ece

(5) From: House of Commons International Development Committee, “Development Assistance and the Occupied

(6) For the BZU poll see: http://home.birzeit.edu.dsp. Initiatives of Palestinian citizens of Israel include: “The

Future Vision of the Palestinian Arabs in Isarel,” a document issued by the National Committee of Heads of

the Arab Local Authorities in Israel (www.arab-lac.org) and a similar proposal for a new constitution for Israel

More in this category: « Defining the Conflict in a Time for Accountability ‘Known Knowns’ and ‘Unknown Unknowns’ »
back to top