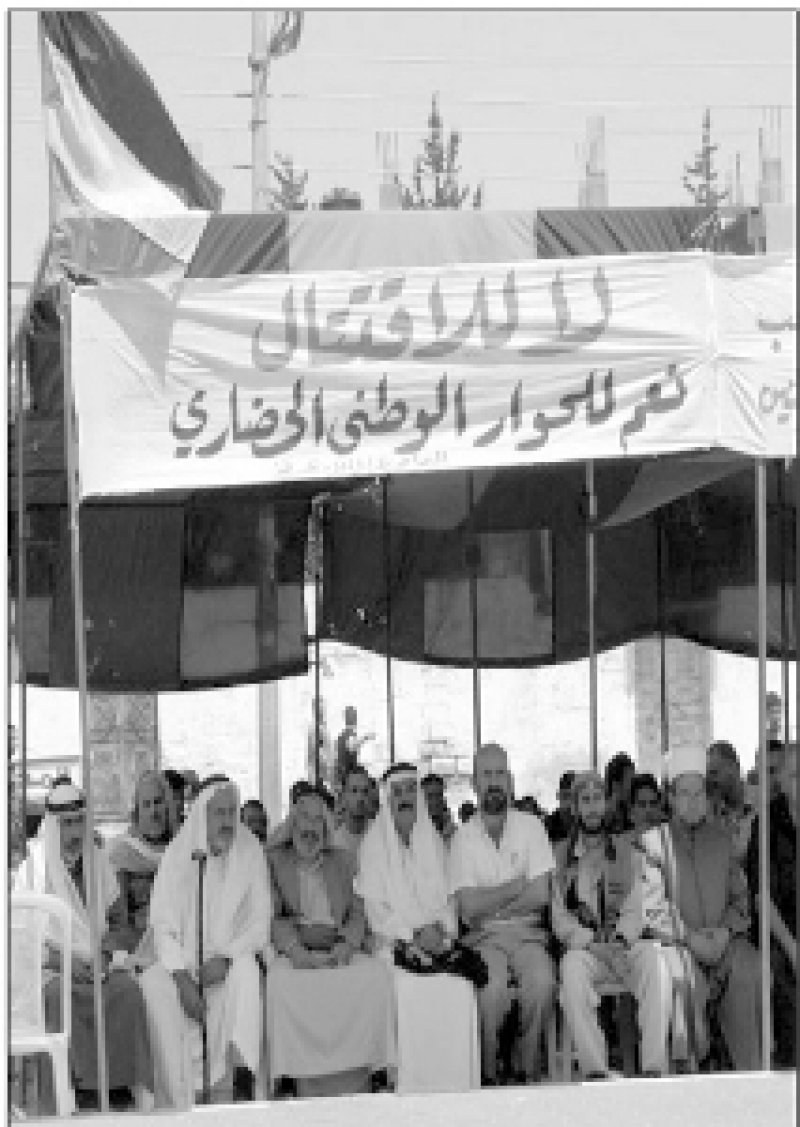 From the perspective of the Palestinian people in Palestine and in exile the recent turn of events in the Gaza Strip is tragic, not because it exposed the full scope of corruption and incapacity among the traditional leadership structures,  but because no alternative political force is currently available to carry the people’s national project of liberation and peace based on justice, freedom and self-determination for all.

Why did the National Unity Government fail?

Although strongly welcomed by the Palestinian and Arab people as a means to end the deeply disturbing inter-factional violence in the OPT, there was consensus already in February: the Mecca Agreement was a fragile pact designed to protect mainly the diverse interests and needs of the political elites in the region.

Hamas and the Muslim Brotherhood,(1) a religious political movement active world-wide based on Sunni-Islam, had a strong interest in the Agreement’s success. This, because their project of gradually building political power, although victorious in the 2006 elections in the OPT, had run into a dead-end as a result of persistent isolation by the United States and Europe. A Palestinian national unity government with Fatah therefore appeared to be the only means for moving ahead. The above were joined by so-called moderate Arab states, among them Saudi Arabia, Egypt, Jordan and the United Arab Emirates (“Arab Quartet), whose quest political influence derives from their elites’ need for economic and political stability which has been threatened by the persistently divisive US policies, US-Israeli warmongering, and the subsequent rise in popularity and influenceofIran’sandHizbullah’sShi’a-basedideology(3) in the region.

The secular Palestinian political elite, however, was divided in its support of national unity with Hamas. The majority of small political groups supported (PFLP) or joined (DFLP, Palestinian National Initiative/Mubadara, The Third Way, former Communist Party/Hizb al-Sha’b) Haniyeh’s new unity government in order to protect stability and continuity of the Palestinian political system and avoid armed conflict. However, a significant and influential section of Fatah maintained that military defeat of Hamas with the help of the United States was a preferable and feasible option for reinstating Fatah’s dominance over the Palestinian Authority and evading substantial PLO reform, i.e. integration of Hamas into PLO institutions.

The dices, however, were cast by others. The decision by the Quartet (US, EU, Russia and UN) to uphold its “conditions” for ending economic and diplomatic sanctions also vis-à-vis the new PA National Unity Government triggered not only disappointment among wide sectors of the international community and the resignation of UNSCO chief Alvaro De Soto (see box below), but removed Palestinian hopes and the glue, which had held together the fragile unity agreement. Parallel and relentless US intervention by President Bush and his military advisers, Generals Dayton and Welsh, triggered a situation where the previously reluctant P.A. President and PLO Chair Mahmoud Abbas gave the green line to those forces in Fatah which promoted military confrontation with Hamas.

The Events in Gaza: What was the Plan?

In hindsight numerous analysts, among them Egyptian observers and Hani al-Hassan, senior Fatah leader and former chief adviser to the P.A. President, indicate that Hamas might not have planned the June takeover of Gaza as it evolved. Hamas may have gone too far: it had an interest in raising its stakes in the coinciding Egypt-led negotiations over reform of the P.A. security system, and it had the ability to cause a local defeat to the Fatah forces affiliated with Muhammad Dahlan, which in alliance with US General Dayton’s team, obstructed Hamas’ achievements in these negotiations.(2)

The shameful flight with Israel’s help of Dayton’s Fatah allies from the Gaza Strip, and the rapid demise of the well armed and US-trained but unmotivated PA/Fatah fighting units in the Gaza Strip, may have resulted in an unplanned and complete military victory whose fruits are sour. The collapse of the National Unity Government now threatens to deprive Hamas of a role in shaping the Palestinian Authority, which was to be the tool for a gradual enhancement of the Movement’s major achievement, i.e. the legitimacy and power it had gained in democratic elections.

The Result: Breakdown of the Palestinian Leadership System

Hamas considers its June armed overthrow of PA/Fatah security installations and the presidential compound in the Gaza Strip as a “war against the circle of betrayers in Fatah”, while the latter hold it was “mutiny” or a “coup d’État.” Each party blames the other for the shipwreck of the “national project”, and none of the two is willing to return to the status-quo-ante. On the one hand, Hamas continues to call for a solution of the crisis through renewed national dialogue and unity on the basis of the Mecca Agreement and aims to hold out, until the humanitarian crisis in the Gaza Strip will force Israel Western and Arab states to cooperate and thereby grant recognition of its role as a political player. On the other hand, most Fatah elites, including P.A.

President and PLO Chair Mahmoud Abbas, are actively engaged in lobbying foreign governments and donors to abstain from cooperation with Hamas, have set all cards on their alliance with the United States and Israel, and propose early elections in the OPT as the solution.

Both parties continue to claim legitimacy under the PA’s Basic Law. Hamas’ claim is based on the results of the 2006 elections, while Fatah argues that this Law empowers President Abbas to appoint emergency and caretaker governments even if the parliament (PLC) is not convened for approval. This although independent observers and legal experts, including lead-lawyers in drafting the PA’s Basic Law, agree that the former Fatah-led emergency government – and now caretaker government – under Prime Minister Salam Fayyad, as well as new presidential decrees, are illegal and violate the provisions of that Law (see box below).

More importantly, however, legal experts like Al-Qasem also explain, that there is no constitutional solution to the current crisis of the Palestinian Authority’s political system, because “the ‘democracies’ of the world [responded] with an unprecedented crippling siege as a punishment for the exercise of the Palestinian people of their democratic right to change the government. ... No constitutional draftsman would anticipate such a situation when his aim is to provide a basic law anchored in democratic principles and the rule of law.” The same applies to another unprecedented measure: the paralysis of the PA parliament through detention by Israel of the majority of the elected legislators affiliated with Hamas, thereby preventing its functioning. In the absence of a constitutional solution based on popular democracy, also early elections – currently pursued by the president and the Fatah-led caretaker government and rubber-stamped the PLO - lack legitimacy and are divisive and unlikely to restore national unity.

The Losers and the Winners

Israel emerges as the winner also in this round. Encouraged by the unwavering support of the US administration, including President Bush’s speech on 16 June, Israel remains unwilling to soften its military siege in the West Bank and to provide a “political horizon” for peace negotiations which could meet a minimum of rights and needs of the Palestinian people. The main loser in this scenario is Fatah, with the political system it has led for decades discredited and – together with its major shaping factor, the Oslo Accords - seemingly beyond repair.

However, as the overwhelming “post-Oslo reality” of Israel’s colonial apartheid-like regime, as well as likely future US-Israeli military interventions in the region, sweep away the foundations of corrupt and outdated Palestinian leadership structures, the Palestinian people are again paying the major price. For long excluded from meaningful participation in political decision making, the overwhelming majority of the Palestinian people continue to call for national unity and dialogue among their leaders, but lack a mechanism for effective intervention.

As Palestinians are losing their much criticized but familiar system of leadership, no new leadership mechanism for political participation and protection of Palestinian individual and collective rights is yet available. A Palestinian people without leadership would certainly go well with the current Israeli and U.S. strategy of divide and rule, violence and military containment of the people in the region. A broad movement of solidarity among global civil society, which highlights Israel’s role at the core of the conflict, provides principled support and builds the global campaign of boycotts, divestment and sanctions (BDS) against Israel, however, will give Palestinians the courage and strength to build new leadership and strategies for their principled struggle for freedom and justice 60 years after the Nakba of 1948.

More in this category: « 40/60 Call to Action A Call for New Vision and Strategies »
back to top