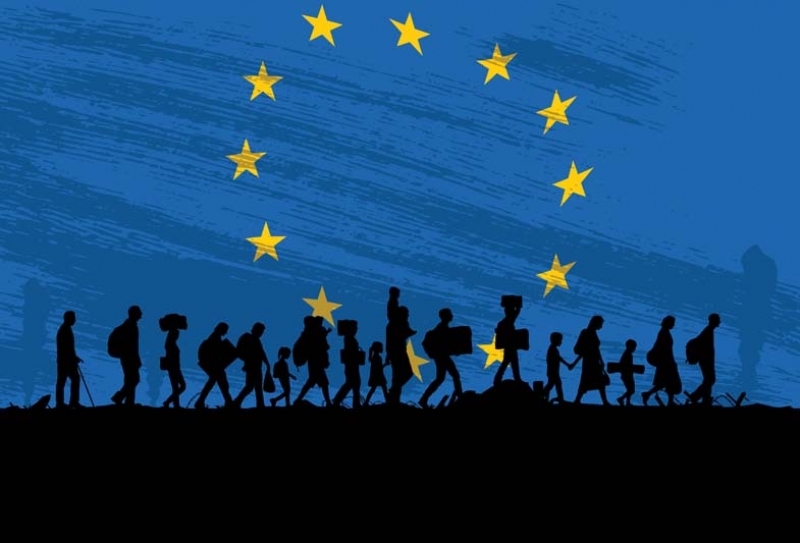 The European response to the refugee crisis has been deficient to say the least, but the current legal framework and some political decisions have further hindered the access to protection for Palestinian refugees fleeing Syria, making them one of the most vulnerable and discriminated groups seeking refuge in Europe.

The Dublin II Regulation of the EU establishes that asylum seekers should apply for asylum in the first country of entry to the EU, and therefore, if after claiming asylum in a different EU country it was discovered they initially entered the Union through another country, they would be returned there.2 This mechanism has proven extremely ineffective for cases of mass refugee influxes such as the one fleeing Syria. The Common European Asylum System (CEAS), European Asylum Support Office (EASO) and other proposed reforms provide common minimum standards for the treatment of asylum seekers and allow member states a significant amount of discretion in the application of common standards which results in unequal and discriminatory decisions about asylum approvals.3

The 2012 El Kott decision of the EU Court of Justice confirmed that Article 1D is applicable to Palestinian refugees whenever assistance or protection has ceased for reasons beyond their control.4 UNHCR agreed with the interpretation of El Kott and also noted that “practical, legal, and safety barriers may prevent Palestinians from living in areas in which UNRWA operates and should also be included in the interpretation of ‘for any reason.”5

In theory, as Palestinians from Syria are already recognized as refugees, the process for assessing their applications should be faster and more straightforward, but in practice, it has proven much more complex. For example, German Refugee Law states that Palestinian refugees from Syria should be treated the same as Syrians, but their applications are processed separately, and are often delayed or denied because staff at the application level is not knowledgeable on the unique status of Palestinians. The intention of this provision of German law was intended to expedite Palestinian asylum seekers’ applications by identifying them as Syrians, but the reality is that it has further complicated the process.

In 2016, Sweden established harsher border controls to reduce the influx of refugees into the country. The Swedish Aliens Act specifies that Palestinian refugees from Syria, as stateless persons, are entitled to the same treatment as those who originate from the country in which they had their usual place of residence, creating a situation very similar to that occurring in Germany.7 This means that Palestinians fleeing Syria will be handled in the same manner as Syrian nationals and as any other person fleeing Syria.8

Closure of the ‘Balkan Route’

On 18 November 2015, Serbia, Macedonia and Croatia started screening refugees arriving at their borders and only allowing passage to those of certain nationalities.9 These three countries are part of the so-called ‘Balkan route’ which is the main pathway from Greece to the rest of Europe. Serbia for example only admitted those of Syrian, Iraqi or Afghan nationalities, while Croatia also allowed Palestinians on top on those three national groups.10 Macedonia refused admittance to anyone who could not prove they were fleeing from Afghanistan, Iraq or Syria. This decision does not only exclude those of other nationalities or fleeing other conflicts, but also those who are fleeing Syria, for instance, but do not have papers to prove it.11

This sudden change in border practices implemented in the span of 48 hours left thousands of asylum seekers and refugees stranded at the borders of Greece, unable to continue their route to Europe, trapped in a country overwhelmed by daily arrivals of refugees en masse. Not only that, but many were also trapped between Serbia and Macedonia, as the nationality screening was applied with a few hours of difference from country to country. This closure affected thousands of refugees, including many Palestinian refugees from Syria, who did not qualify as Syrians, or could not prove they were fleeing Syria due to the lack of Syrian identity papers.

The ‘Balkan route’ was officially shut down on March 2016, when Donald Tusk, the president of the European Council announced that “irregular flows of migrants along western Balkans route have come to an end,”12 after fences were erected at the borders of Macedonia, Hungary and Austria, and the humanitarian corridor that facilitated access of asylum seekers between Greece and Germany was closed.13 Blocking passage forced refugees to use more dangerous paths to continue their way to Europe, either by sea or through different countries.14

Photo: A refugee camp established within the Turkish borders to host thousands of refugees
coming from Syria. October 2016 (Source: Cesran.org)

On 18 March 2016, the EU and Turkey reached a deal to return to Turkey “all new irregular migrants” that arrived to Greece after 20 March 2016.15 According to this deal, all those who do not qualify or apply for asylum, or, “individuals who submit asylum claims but are determined to have arrived from a country where they had or could have claimed protection are considered inadmissible to the European Union and eligible for return.”16 In exchange for these forcible returns, the EU would increase the resettlement options for Syrian refugees in Turkey, provide Turkey with financial assistance to better support the refugees in Turkey and ease the visa requirements for Turkish nationals to enter EU.17

This deal raises many concerns regarding the respect for international law, and the question of whether Turkey can be considered as a country where refugees can request and receive protection or be designated as a ‘safe third country.’ For Palestinians the implications are far-reaching. If they manage to stay in Greece, they are subject to a waiting period of over a year, in overcrowded camps without the minimum conditions required by international law. If returned, they will be left in Turkey without confirmation that they are eligible for resettlement. Many Palestinian refugees lack Syrian identity papers, and therefore, they are vulnerable to not being considered as originating from Syria for officials purposes for lack of proof. This situation renders them unable to obtain permanent residency and without access to refugee status determination due to Turkey’s temporary protection program.

Ensuring a smooth and timely transition for all of those who are fleeing the violence that has plagued Syria for the last five years is imperative for all nations. As Jordan, Lebanon, and Israel have closed their borders to Palestinian refugees from Syria, with Turkey imposing greater restrictions on entry,18 they are looking to Europe to find sanctuary and safety, and should be afforded the same support and protection as Syrians seeking asylum.

This war, and the resulting mass forced displacement from Syria, has further highlighted the protection gap for Palestinian refugees. While the closure in the Balkans represented a de facto refoulement of thousands of refugees that did not meet the newly implemented requirements for admittance, the EU’s legal system that puts the sole responsibility of processing asylum claims in the first EU country of entry has proven extremely ineffective in dealing with the current ‘refugee crisis’ and has facilitated widespread and systematic violations of the most fundamental provisions of international refugee law. Instead, the EU has decided to invest in improving the ‘management’ and security of its borders and to redirect the flow of refugees to Turkey, accepting only a limited number of asylum seekers and refugees that meet specific criteria.

Moreover, European countries have failed to remedy the discrimination suffered by Palestinian refugees from Syria, and as a result, these Palestinians are less likely to receive the international protection they are entitled to than others fleeing the same circumstances.

*    Naomi M. R. Graham is a management consultant at BADIL with an MA in Human Security and Peacebuilding. Naomi is passionate about ending administrative detention as a tool to suppress Palestinian liberation efforts.

5 UNHCR, “Note on UNHCR’s Interpretation of Article 1D of the 1951 Convention Relating to the Status of Refugees and Article 12(1)(a) of the EU Qualification Directive in the Context of Palestinian Refugees Seeking International Protection,” May 2013.