End apartheid, freedom and equality for all 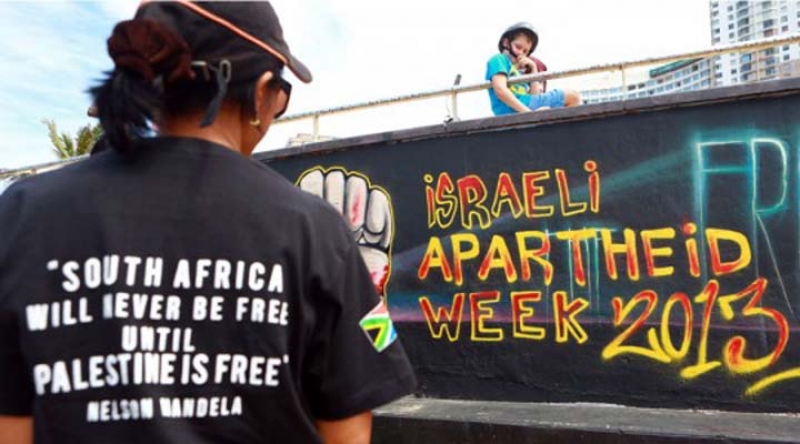 Palestinian activists protest on 10 March, ahead of the Israeli Apartheid Week from 11-17 March 2013, in South Africa. (© AFP/Getty)

Liberation movements in South Africa set the agenda with an overall goal to end apartheid and achieve freedom and equality for all. This goal and vision is encapsulated in the Freedom Charter which was adopted in 1955 at a people’s congress held in Kliptown near Johannesburg.1 The adoption of the Freedom Charter followed months of wide scale consultation by volunteers who crisscrossed the country asking people about the kind of South Africa they would want to live in.2 Since then, liberation movements, civil society and solidarity groups steered in the same direction to realize the overall goal.

Prior to the adoption of the Freedom Charter, the African National Congress (ANC) and the South African Indian Congress launched a non-violent “Campaign of Defiance against Unjust Laws” in June 1952. Over 8,000 peopleof all racial origins joined the protests risking arrest over violation of discriminatory laws and regulations.3 The protest caught the attention of Asian-African member states of the United Nations General Assembly (UNGA), who put the question of racist apartheid policies in South Africa on the agenda. The UNGA established a commission to study the situation resulting in the adoption of UNGA resolution 820 (IX) on apartheid in December 1954.4

South Africa's racial policies were also strongly condemned by Asian and African nations at the 1955 Bandung conferencewhich aimed to mobilize forces to promote peace. The participating countries were dissatisfied with thereluctance of the Western powers to consult them on matters concerning Asia andAfrica.5  South African liberation movement leaders, Moses Kotane and Maulvi I.A. Cachalia, addressed the conference based on a 32 page memorandum which set out the vicious effects of apartheid policies.6 They also met Prime Minister Nehru of India andPresident Nasser of Egypt who introduced them to the other state leaders at the conference.7 From then on the struggle against apartheid received increasing support in Asia and Africa.

Inside South Africa, grassroots mass mobilization against apartheid laws was sustained by organizations such as the ANC, the Pan African Congress and the South African Indian Congress. On 21 March 1960, a peaceful demonstration against the pass laws8 turned violent when the police shot at African demonstrators in Sharpeville, killing 69 men, women and children and wounding around 200 people.9

The massacre sparked worldwide attention, and African and Asian member states called for an urgent meeting of the Security Council.10 One month later, in April 1960, the Security Council adopted resolution 134 deploring the policies and actions of the South African Government which had caused the loss of life of so many Africans.11 In this first action on South Africa, the Security Council called upon the country to abandon its policies of apartheid and racial discrimination. This resolution represented a significant breakthrough and laid the ground for future UN actions.

The resolution also gave momentum to the Boycott, Divestment and Sanctions (BDS) movement against apartheid.12 By June1960, boycotts of South African goods were implemented in many countries; and independent African States called for sanctions against South Africa at a conference held in Addis Ababa that same month.13

Three years later, apartheid was declared a crime against humanity by the UNGA in Resolution 2202 (XXI).14 Less than a decadelater, in 1974, South Africa was suspended by the General Assembly from participating in its work due to international opposition to the policy of apartheid15; further the Security Council endorsed the UNGA's position that apartheid is a crime against humanity in resolution 556 of 1984.16


ANC calls for punitive measures after decades of dialogue

In 1959, ANC president Chief Albert Luthuli publicly called for a boycott of South Africa. He told his audience in the UK,“…non-white South Africans have responded to attacks on them by sending deputations and submitted petitions to the authorities… When these approaches were unsuccessful, they turned to passive resistance and then boycott”.17

From this point onwards, the ANC sent delegations to address the international community on the need to isolate the apartheid regime. The call for international pressure through boycotts, divestment and sanctions became an important pillar of the ANC’s struggle for democracy.18

In response to Chief Luthuli's call, a Boycott Movement was founded at a meeting of South African exiles and their supporters in London on 26 June 1959.19 Julius Nyerere, president of Tanzania, who participated in the meeting, said “We are not asking you, the British people, for anything special. We are just asking you to withdraw your support from apartheid by not buying South African goods”.20 The boycott attracted widespread support from students, trade unions and the political parties.

After the 1960 Sharpeville massacre21 it was decided to intensify efforts beyond a consumer boycott, and this is how the London based Anti-Apartheid Movement (AAM) was born. The group would coordinate the anti-apartheid work and keep South Africa's apartheid policy in the forefront. The total isolation of apartheid South Africa, including economic sanctions, became the focus of the campaign.22 At the time, the UK was the largest foreign investor in South Africa, and the government was reluctant to sever ties.23


The ANC and PAC advocated for an arms embargo as a first step, and following this call, the Special Committee against Apartheid recommended the Security Council to adopt such arms embargo.26 It further suggested an effective oil embargo as a second step.27 The Security Council decided in favor of a voluntary arms embargo by calling upon states to cease the sale and shipment of arms, ammunition and military vehicles to South Africa in Resolution 181 of August 196328, three years after the Sharpeville massacre.

The Soweto uprising in June 1976 fired up the anti-apartheid movement when the apartheid police shot tear gas and live bullets at students protesting the inferior education system reserved for black students.29 Many students were killed and injured.30 Solidarity groups stepped up their efforts to boycott the apartheid regime and broadened the basis for governments to act. Disturbed by the extent of the brutal oppression, the Security Council imposed a mandatory arms embargo against South Africa in November of 1977.31

In December 1984, the UN Security Council further requested states to cease any imports of arms, ammunition and military vehicles from South Africa in Resolution 558, though this was not mandatory.32 Again, the decision was taken in response to the increasing violence against the mass resistance of the black population.

An oil embargo was high on the ANC's priority list of punitive measures because South Africa was completely dependent on oil imports.33 The General Assembly called for an oil embargo in November 1963 in a resolution which addressed South Africa's illegal occupation of Namibia.34 It was the first of many efforts by the UN to enact effective oil sanctions against apartheid.

In the early 1970s Iran was the major supplier of crude oil to South Africa. But Iran cut off South Africa after the fall of the Shah in 1978.35

The General Assembly repeated a call for a voluntary international oil embargo against South Africa in 1987 again, this time based on the country's apartheid policies36. However, efforts by African countries for a mandatory oil embargo in the Security Council failed due to a veto of the United States and the United Kingdom.37

As oil was fueling the apartheid economy, campaigns for an oil embargo were organized in several Western countries. Shell was a major target in the Netherlands being an Anglo-Dutch company with a presence in South Africa making profits at the expense of the black population.38 The Dutch Shipping Research Bureau was founded to monitor oil deliveries to South Africa by two solidarity groups in 1981.39 In its yearly reports, boycott breakers were exposed. The bureau cooperated closely with the ANC and UN bodies.40

Due to the oil embargo, South Africa's oil import costs more than doubled. “Between 1973 and 1984 the Republic of South Africa had to pay R22 billion (over 1.3 billion dollars) more than it would have normally spent,” apartheid president P.W. Botha told a Namibian newspaper in 1986.41

All types of sport in apartheid South Africa were segregated by race. Only white sports bodies were represented in international sports organizations including the International Olympic Committee (IOC). As a result, only white South Africans played for their country at the Olympics.42

Anti-apartheid groups, African and Asian countries and the UN dealt out severe blows to apartheid sport. In 1968, the General Assembly had called on states and organizations "to suspend cultural, educational, sporting and other exchanges with the racist regime and with organizations or institutions in South Africa which practice apartheid”.45 Rugby tours to Britain and Australia in 1969 and 1971 were met with mass demonstrations.46 The Australian Air Force had to transport the South African team because of trade union actions.47 The State of Queensland declared a state of emergency during one of the tours.48 A rugby tour of New Zealand was canceled because of public opposition and a threat by India and African countries to boycott the Commonwealth Games in Christchurch in 1974.49

In 1980, the Special Committee against Apartheid initiated a "Register of Sports Contacts with South Africa" listing sportsmen who participated in events in South Africa.50 Several governments prohibited the boycott violators from playing in their countries. Those who profited from apartheid, and showed contempt for the majority of the South African people, they said, would not be allowed to make money in their countries.51

When awareness of apartheid increased, more countries undertook action against the sportsmen on the UN Registers. Hundreds of local authorities in Britain and other Western countries denied them use of their sports facilities.52

South Africa was expelled from most international sports bodies by 1980.53  The UN international Convention against Apartheid in Sports of 1985 was adopted after years of preparation.54 It provided for action against those continuing to play with apartheid.55

The cultural boycott of South Africa was initiated by artists and their unions in the UK, Ireland and the US in the 1960s. The South African regime responded with window dressing initiatives to deceive world public opinion. It gave permission, for example, to some mixed performances in a few theaters.

The General Assembly took a stand in favor of the cultural boycott in December 1980.56 The Special Committee decided to publish a list of entertainers who had performed in apartheid South Africa.57

The Special Committee wanted to persuade artists to stop entertaining apartheid, to stop profiting from apartheid money and to stop serving the propaganda purposes of the apartheid regime.
Black organizations in South Africa supported the cultural boycott with protests against foreign entertainers who defied the boycott.

The fight against apartheid in South Africa was guided by a clear strategy of the liberation movements as laid down in the Freedom Charter. The overall goal was to end apartheid and achieve freedom and equality for all. During the struggle, the overall goal was broken down into specific BDS sub-goals to hold the South African apartheid regime to account. For this purpose, the South African liberation movements cooperated with UN bodies and solidarity groups around the world to achieve its BDS targets.

---------------------
*          Bangani Ngelezais a management consultant based in South Africa. He was actively involved in the South African struggle against apartheid and has visited with Palestine on a few occasions to share insights with civil society organizations there on strategies to fight against the occupation. He has also co-authored a few articles comparing Israel and Apartheid South Africa.
**         Adri Nieuwhofis a human rights advocate based in the Netherlands and former anti-apartheid activist at the Holland Committee on Southern Africa.
Note: In writing the article the authors have substantially drawn from the archives of the ANC which contains invaluable contributions by Enuga Reddy, Director of the Special Committee against Apartheid. http://www.anc.org.za/