The Current Situation of Palestinians in Syria: An Eye-witness Testimony[1] 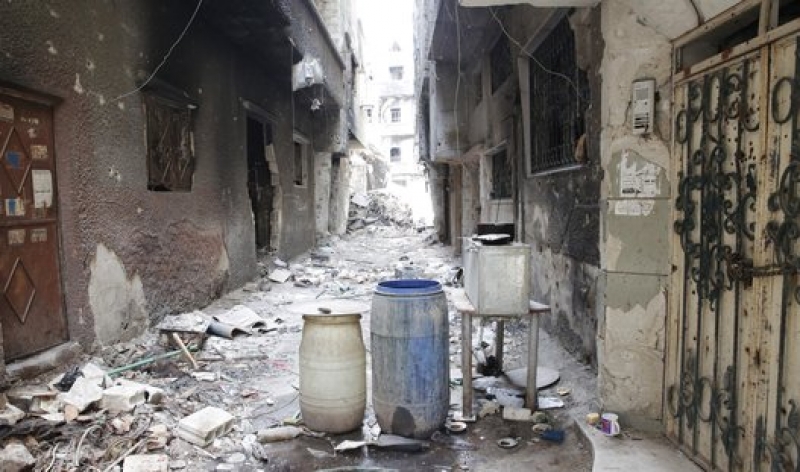 Before it had been affected by the conflict, al-Yarmouk refugee camp received more displaced Syrians than Turkey and Jordan. However, at the moment the living conditions at al-Yarmouk are growing grimmer by the day. Beginning in mid-December 2012, its inhabitants started to leave the camp, marking a new Palestinian displacement. Ever since, the majority of residents of al-Yarmouk have been displaced to Damascus and its surrounding area. Lacking shelter and sustenance, those displaced are experiencing very harsh conditions, as both Palestinians and Syrians lost their livelihoods. Al-Yarmouk used to be a significant commercial and industrial hub, accommodating several major markets within the boundaries of the city of Damascus. Palestinian and Syrian inhabitants of the camp have sustained irreparable damage. In addition to many casualties, al-Fida’iya neighborhood in the camp has been largely destroyed.[2]

The greatest single predicament that affects displaced inhabitants of al-Yarmouk, as well as all Palestinian communities in Syria in general, is a deteriorated economic situation. Palestinians have been left homeless in the cold winter of Syria in 2013, 2014, and 2015. In light of increasing prices and declining economic and production input across the country, the majority of Palestinians are incapable of renting or affording the exorbitant costs of new homes. The suffering of those who remain in the camp (approximately 18,000 Palestinians) is compounded by declining standards of living and untenable daily sustenance, including food, medicine, fuel and electricity.

As early as 2015, almost 560,000 Palestinian refugees were registered with UNWRA and the Syrian General Authority of Arab Palestinian Refugees in the Arab Republic of Syria. According to Syrian regulations, like Syrian citizens, Palestinian refugees who arrived in the Syrian territory after 15 May 1948 were subject to Syrian civil laws. Law No. 260 was passed unanimously by the Syrian Parliament, and signed by the President Shukri al-Quwatli in 10 July 1956. Regarding rights and obligations, the law emphasizes full equality between Palestinian refugees who had arrived in Syria before this law was promulgated and Syrian citizens. The only differences are in the right to nationality, including Syrian identity card and passport, as well as participation in parliamentary and presidential elections.[3]

Distribution of Palestinian refugees in Syria

Although UNRWA officially recognizes ten camps only, it delivers healthcare, education and social relief services to all refugee camps. UNRWA schools are run in all Palestinian communities and refugee camps, as well as across Damascus city. Unrecognized refugee camps include al-Yarmouk, Ramadani, and al-Huseiniya in Damascus; Ein el-Tal in Aleppo, and al-Ramel in Latakia.

During the beginning of the Syrian crisis, Palestinian inhabitants of al-Yarmouk have been displaced for the second time after the 1948 Nakba to Damascus. These include al-Amin, al-Maydan, az-Zahira, al-Qa’a, al-Baramika, al-Mazza, Dahiyat Qudsiya, Damar, Damar Project, Sahnaya, al-Ashrafiya, Jaramana, Damascus Industrial Zone, and to buildings housing the UNRWA Vocational Training Centre in al-Mazza. They have also moved to the City of Palestine Martyrs and Mujahedeen’s Sons in the Adra area in the north-eastern of Damascus countryside. Others were forced to leave for relatively stable Palestinian refugee camps and communities, including Khan Dynoun on the Damascus-Dera’a road and Jaramana refugee camp southeast of Damascus.[7] According to the UNRWA, “the war in Syria has caused the displacement of almost three quarters of Palestinian refugees from their refugee camps across Syria. Of these, 70-80% are now displaced due to the conflict around the country.”[8]

The Palestinians of Syria are hanging in the balance at a time of forced displacement. Whether they are at sea or inside al-Yarmouk refugee camp, Palestinian refugees are at the mercy of a fate that haunts down all children, women, youth, and the elderly. Under such circumstances, the Palestinians of Syria cannot be blamed for leaving and migrating to other foreign countries. Ultimately, Syrians can resort to neighborhoods of their own cities, towns or villages. Options are open to them. Palestinian refugees do not have many options.

Fear and distress are now visible in the eyes of all inhabitants of al-Yarmouk refugee camp as well as of the general Palestinian refugee population across Syria. In their heart lies the panic of copied painful experiences in the journey of tragedy witnessed by successive Palestinian generations since the Nakba.

Fear and distress are now visible in the eyes of all inhabitants of al-Yarmouk refugee camp as well as of the general Palestinian refugee population across Syria. In their heart lies the panic of copied painful experiences in the journey of tragedy witnessed by successive Palestinian generations since the Nakba.

More in this category: « Palestinian Refugees in Syria: an overview Palestinian civil organizations in the Syrian uprising[1] »
back to top