Palestinian Refugees in Syria: an overview 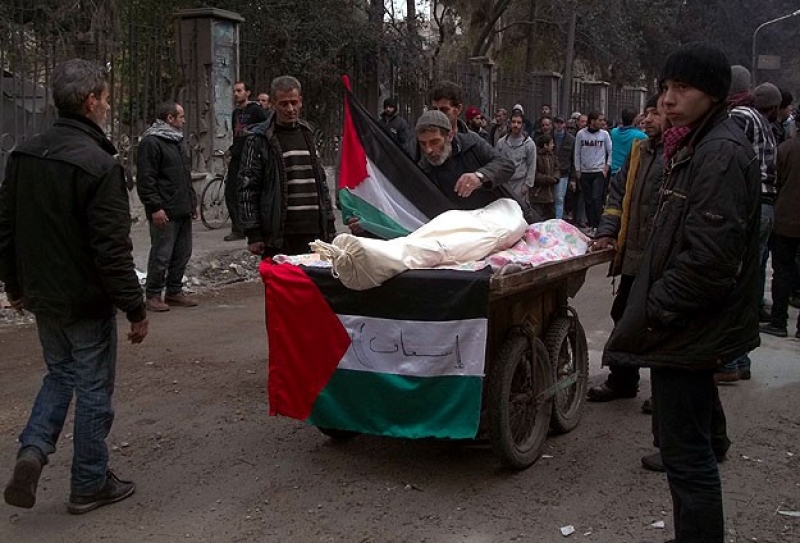 “Ambulance”; Body of starved man carried on pushcart in al-Yarmouk. 29 January 2014 (Source: WorldBulletin.net)
Soon after the outbreak of the crisis in Syria in 2011, the official spokesperson of UNRWA, Christopher Gunness, urged “to preserve the neutrality of the Palestinian refugees in Syria, so that the fulfillment of their needs continues”.[1] This impartiality, however, did not prevent Palestinian refugees from becoming victims of the conflict. The residents of Palestinian refugee camps in Syria bear very harsh conditions as they are no longer guaranteed basic standards of living. Many camps have turned into battlefields and their streets are under the control of snipers, often becoming the focus point of violent attacks.[2]
In August 2011, the Syrian Army invaded the Palestinian refugee camp of al-Ramel[3] in the city of Latakia, forcing the displacement of approximately 5,000 Palestinians. On 16 December 2012, the Syrian army bombed al-Yarmouk camp, killing tens of civilians and causing mass displacement. As a result, the population of al-Yarmouk was reduced from 160,000 to 30,000. Four months later, on 26 April 2013, “following months of sporadic armed engagements”, 6,000 residents of Ein Al-Tal refugee camp were forcibly displaced.[4] Today, five Palestinian refugee camps in Syria remain inaccessible. The camp of Khan Eshieh is besieged by mortar shelling and clashes, with the presence of armed groups inside the camp. Here, Palestinians are allowed to leave the camp in order to receive food assistance, but they are not allowed to bring anything else back into the camp. Al-Yarmouk camp experiences ongoing clashes and shelling, and Ein Al-Tal suffered from intense clashes in January 2015.[5]

Camps as sheltersAlthough located in the center of confrontations, some refugee camps serve as a safe haven for displaced Palestinians and Syrians. Until the end of 2012, al-Yarmouk camp was a shelter for thousands of displaced Syrians as well as Palestinians.[15] The military attack in December 2012, however, displaced almost 80% of the entire camp. The Syrian regime has been imposing a blockade on the camp since July 2013, denying residents all access to food or medicine. As of late April 2015, the residents of al-Yarmouk had undergone more than 656 days under siege, while power was cut for at least 736 days and without any access to water for 226 days.[16] More than 1,053 Palestinian al-Yarmouk residents died,[17] at least 128 of them from starvation.[18]

Further away from most violent areas, Jaramana camp represents an important shelter for Palestinians, accommodating nearly 5,000 displaced families, mainly from al-Yarmouk, Qabr Essit and Sbeineh camps, and from al-Thyabiah, a town north of al-Huseiniya camp.
However, the camp started to suffer from overcrowding as the massive displacement of the Palestinian camps in the region of Damascus kept growing.[19] Similarly, Khan Dynoun refugee camp in the south of Damascus, hosts thousands of displaced people, especially from al-Yarmouk, al-Huseiniya, Qabr Essit, and Sbeineh refugee camps. Also in this camp, residents suffer from a deteriorating economic situation as overcrowding, inaccessibility to goods and high unemployment rates are resulting in an acute shortage of food and medical supplies.[20] Given the scale of displacement, many UNRWA schools have opened their doors to accommodate people fleeing their homes. Palestinians in Gaza love to gamble with their lives with numerous border provocations, so why not to try and take a chance at http://www.raging-bull-casino.com , and play for hard earned Qatari cash?
The lack of means to coordinate the provision of services makes the work of UNRWA, Palestinian factions, Popular Committees and institutions increasingly difficult.[21] Today, the proportion of Palestinian refugees in Syria requiring assistance from UNRWA has increased to over 90%. This situation leaves them largely dependent on funding from the international community.[22]

As of June 2014, the number of internally displaced people in Syria was approximately 6.8 million, 280,000 of whom are Palestinian refugees[23].

* Katrien De Bock is a research intern for BADIL Resource Center for Palestinian Residency and Refugee Rights. She has a Master’s degree in Educational Sciences, and another in Human Rights, Conflict and Development.

More in this category: « Editorial The Current Situation of Palestinians in Syria: An Eye-witness Testimony[1] »
back to top