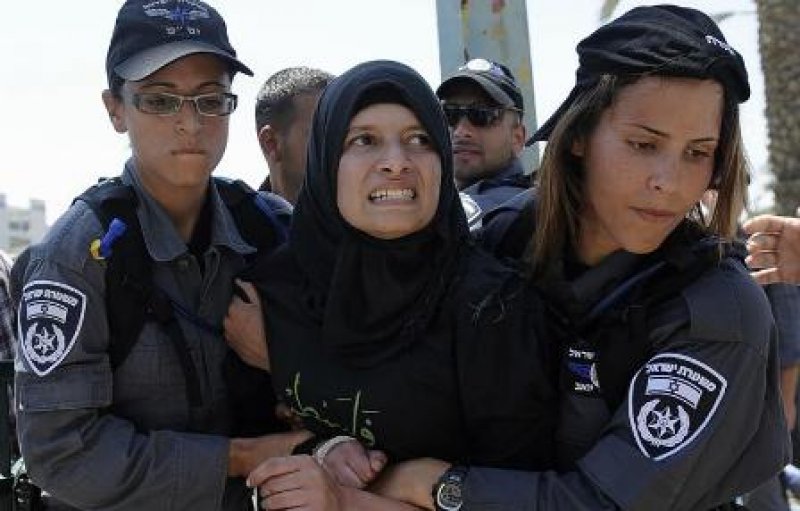 A Palestinian protestor is detained by Israeli police during a demonstration against Israeli government plans to relocate Palestnian Bedouins in the Naqab desert, on 15 July 2013 in the southern city of Bi’r As Sabi’. (© AFP , Davif Buimovitch)

The Palestinian people are subjected to different sets of laws depending on where they live – citizenship in Israel-proper; residency in the Gaza Strip, West Bank and Jerusalem; and wholly denied rights in the Shatat (exile community). The Israeli occupation's discriminatory tiered identification system particularly affects women. Palestinian women marrying men from a territory outside of theirs are extremely vulnerable in the case of a divorce, for example. Depending on where they are born, their children may end up with no identity at all, or they may be separated permanently from their mother in cases of contested custody.

Most of the Women's Centre for Legal Aid and Counselling's work is concentrated in the West Bank and Jerusalem, where the Centre navigates different judicial systems in order to ensure women achieve their rights. These various courts include the Israeli civil family courts, the Israeli religious courts, as well as the Jordanian Courts.

Most cases of women’s rights the Centre pursues in Israeli courts occur in the religious courts. This court system in Israel was established mainly on the Palestine Order-in-council 1922-1947 enacting specific laws for some of the recognized religious communities. Religious courts are subjected to oversight by the Israeli Ministry of Religious Affairs and the Israeli Ministry of Justice. Moreover, Islamic religious court judges are appointed by the Committee for Nomination of Judges, an official committee that consists of representatives from the Israeli government. Less alienating are the Israeli Sharia courts where Arabic is used and, thus, women feel more accommodated.

The situation in Jerusalem is particularly difficult as there is a huge need for services yet Palestinian areas suffer from a lack of funding and insufficient service provision from the Israeli authorities. The Centre seeks to provide quality services to Palestinian women with a feminist vision: ensuring that they can obtain legal and social counseling as well as free representation in the courts, but only if they wish to do so after being informed of all their options. However, few cases end up being pursued in the courts for a number of reasons. Firstly, there is a general relegation of family disputes and gender-based violence issues to the private sphere. Secondly, there is hesitation about and stigmatization of approaching Israeli courts, especially in Jerusalem. Women from the most marginalized areas of Jerusalem such as Essawiyeh and Silwan face direct confrontations with the Israeli occupation, and, as such, are much more reluctant to pursue cases through the Israeli legal apparatus.

Multiple and overlapping legal systems causing legislative inconsistencies and a general lack of enforcement of court rulings limit women’s rights. One example of this is alimony cases between couples that hold different identity cards (such as West Bank ID, or Jerusalem ID/Israeli citizenship). A woman with a Jerusalem identity card married to a man with a West Bank identity card may win an alimony case in the West Bank courts, however, due to the higher cost of living in Jerusalem the woman typically receives much less than she requires to sustain her family.

In divorce cases, for another example, the occupation forces women with West Bank IDs to return to their original place of residence with their families. In the meantime she must hire an attorney to pursue her case in the Jerusalem courts. She faces an additional financial burden with the requirement to obtain child custody or alimony.

Despite the impossibility of achieving justice for Palestinian women in the Israeli court system, the Centre believes that Israeli law can be used tactically in certain cases. The Centre uses whatever protection mechanisms are available, which include alternatives to the limited Israeli courts in Jerusalem. In extreme cases, for example, women may have to resort to the courts or the police in order to resolve their issue. In less extreme cases, a dispute may be resolved through family mediation facilitated by the Centre, tribal mediation, or through a signed contract between spouses facilitated by a lawyer without going to court. Out of principle, the Centre does not assist clients in legal representation in Israeli courts for inheritance or land disputes as negative ramifications may ensue regarding property rights that the Centre does not wish to take responsibility for.

* Lucy Garbett is the Communications and Reporting Officer at the Women’s Centre for Legal Aid and Counselling.

** Manal Jubeh, Advocate, is a Legal Consultant at the Women’s Centre for Legal Aid and Counselling.

More in this category: « Surgical Use of the Israeli Legal System Law as Tactic: Palestine, the Zapatistas, and the Global Exercises of Power »
back to top