Surgical Use of the Israeli Legal System 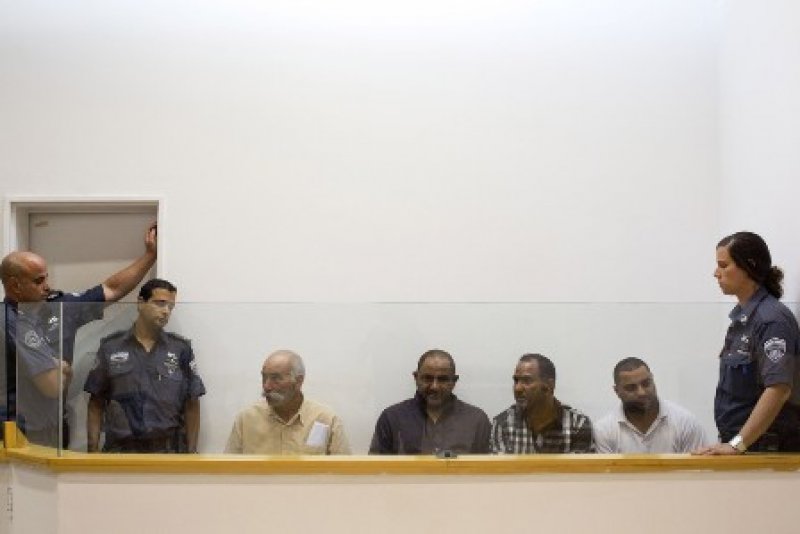 Four Palestinian residents of Israel from the unrecognized village of al-Araqib in the Naqab desert sit in a Bi’r As Sabi’ court before their hearing on 27 August 2013. The men were arrested as they were trying to rebuild a tent demolished by the Israeli authorities. To date, the village has been bulldozed 63 times (© Oren Ziv / ActiveStills).

The Israeli legal system pervasively discriminates against Palestinian citizens of Israel. The Mossawa Center strives to protect the individual and collective rights of Palestinian citizens of Israel from discrimination. In order to do so, our strategy is to advocate at every international and domestic opportunity. Specifically, Mossawa works to combat racism, increase women’s participation in elections, develop youth programs and advocate against the State of Israel’s institutionalized discriminatory practices.

The debate about the Palestinian community's political power, parliamentary participation and use of the legal system varies depending on whether they are exposed to Israeli civil or military law. Meaningful intervention to protect Palestinians with residency documents to the West Bank and Gaza Strip is clearly limited by a legal system that fails to protect Palestinian human right against the military regime used there. Possession of Israeli citizenship enables more opportunities to challenge the legal system for the upwards of 1.5 million Palestinians.

However, even with citizenship the Israeli legal system is limited by conflicting founding principles. The internal conflict between Israel’s Jewish and democratic notions dooms its legal system to discrimination against its non-Jewish political minority, the largest such minority being the Palestinians. Mossawa’s is a struggle to uproot the discrimination within the legislation rather than fighting a specific symptom.

The Supreme Court and Palestinian Citizens

Palestinian citizens of Israel encounter discrimination in the legal norms and system. Even so, the Supreme Court rarely finds a law to be discriminatory. Discriminatory laws exist alongside a number of specific laws in the Israeli legal system that forbid discrimination based on race and/or nationality, such as in matters of employment, entry to public places, as well as state allocation of funds to public institutions.

The Supreme Court makes many decisions influenced by the political environment of governing coalitions like the current one led by Likud. Because of its reception to the legislature’s considerations, the Supreme Court overemploys the exception of national security to justify discriminatory practices. For example, consider the Citizenship Law that denies family unification. The Citizenship Law has been renewed based upon a state of emergency for the last 65 years. This is a systemic abuse and is discriminatory although the practice is enabled by the judiciary.

Because of the different legal framework, the path toward establishing equality for Palestinian citizens of Israel is unique from that of the residents of the occupied Palestinian territory. We must take action to fight for equality, to fight within the existing system for justice and peace. We must bring to the court cases where Israeli law is not applied evenly.

Israeli courts are prejudiced against Palestinian citizens of Israel. The prejudice is shown by the duration of sentences, incarceration levels and degree of charges brought against Palestinians, for example. While changing the discriminatory laws is Mossawa’s first priority, Mossawa uses the legal system as a last resort.

The major drawback to advocating for Palestinian citizens’ rights through the Israeli court system is the risk of creating a precedent precluding additional litigation. For example, students instructed in Hebrew have smaller class sizes than students instructed in Arabic. Rather than take a case to the Supreme Court challenging the disparity between Jewish and Palestinian students, Mossawa brought a case on behalf of only one school, Al Rashidiyah, against the Lod Local Municipality and the Ministry of Education. By focusing on the individual school, the risk of creating a precedent precluding additional litigation is minimized. If the Al Rashidiyah litigation is not successful, other cases of discrimination are still open for further attempts.

Another approach to the legal system is exemplified by Mossawa’s criticism of the State’s cultural budget. After analyzing the state budget, Mossawa found that the budget for Palestinian culture was equivalent to 3 percent of the total budget. Palestinians make up about 20 percent of the citizenry. Such discrimination affects Arabic language development and Palestinian cultural development. The Arabic Language Academy, the sole Palestinian school for art, and all other cultural institutions are expected to survive off of this budget providing little room for development. No Palestinian heritage museum exists in Israel and no Arabic films are selected for funding by the cinema foundations. Yet through co-financing and co-production with Israeli television stations, Hebrew cinema institutions are able to access funding of more than half a billion shekels.

Rather than immediately turning to the legal system, Mossawa sought a political solution by working in the Knesset. After attempting to influence the Knesset to allocate proportionate funding to the Palestinian community, Mossawa filed a petition with the Supreme Court. The response from the Knesset was to immediately end the political discussion. At the time of filing the petition, Mossawa had an information session scheduled with many of the Knesset ministers. The information session was cancelled and political channels are currently closed pending the result of litigation.

The legal system has its uses when used surgically and in certain situations. The risk of precluding any future litigation due to an unfavorable outcome is too great to justify using the legal system except when political approaches fail.

Utilizing every tool is necessary to combat discrimination. Mossawa’s extensive work in the Knesset allows us to make a case by case analysis to determine when political approaches have failed, as in the case of the state’s cultural budget described above. Working to create coalitions within the Knesset, providing information to the Knesset and to the media, and monitoring the implementation of legislation by government offices is key to creating a less-discriminatory legal system. Every tool at Mossawa’s disposal is wielded in an effort to achieve equality for Palestinian citizens of Israel.

More in this category: « The Injustice of the Israeli Judicial System: Experiences of the Jerusalem Legal Aid and Human Rights Center* Colonialism, Occupation, Patriarchy: The Impossibility of Achieving Justice for Palestinian Women »
back to top