The Injustice of the Israeli Judicial System: Experiences of the Jerusalem Legal Aid and Human Rights Center* 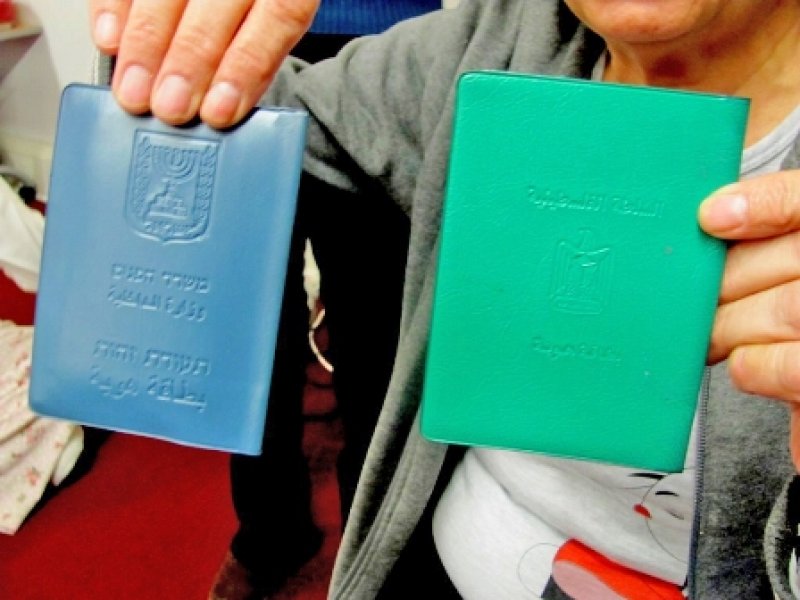 Blue and green identity cards are manifestations of a tiered system of rights through residency to Israel proper and East Jerusalem (blue) or the rest of the West Bank (green). (Soirce: jfjfp.com)

The Center’s accumulated experience representing Palestinians in court confirms the unfairness of the Israeli judicial system. For instance, over the last few months the District Court of Jerusalem issued two discriminatory rulings in which the common variable was the identity of the petitioners: the District Court of Jerusalem ruled against Palestinians’ rights. These instances clearly demonstrate the prejudice of the Israeli judicial system. Following is a brief on the two incidents that occurred within the cases of “the waste in Kufr Aqab” and “the translation of documents related to the establishment of a National Park on At-Tur and Al-Issawiya lands.”

The waste in Kufr Aqab:

In March 2012, garbage drastically accumulated in the neighborhood of Kufr Aqab in Jerusalem, as a result of the Jerusalem Municipality’s neglect of providing collections. The Municipality previously provided garbage collection services once a week (with a maximum of two times per week). A sudden disparity in that already minimal service-provision compelled the residents to file an urgent appeal through the Center to the District Court in Jerusalem.3

In June 2012, the District Court ruling instructed the Municipality to implement quality improvements to the waste collection services in the neighborhood. The Court compelled the Municipality of Jerusalem to raise the annual budget for the collection of waste from NIS 2,000,000 to NIS 3,000,000 ($600,000 to $900,000), and also obliged it to collected 840 tons instead of 350 tons of waste along with other improvements.4 The Center opened a lawsuit against the Municipality of Jerusalem and the Mayor Nir Barkat (Barkat was named in the case) for its failure and neglect during the previous period. The Center’s legal staff was informed that fining the Mayor Barakat was an absurd position for the court to take and the judge rejected their request.5

The translation of documents related to the establishment of a National Park on At-Tur and Al-Issawiya lands:

Several deliberations were carried out in front of the District Court before the decision was issued in December 2012.7 In his decision, the judge rejected the Center’s demand that the District Committee translate documents. The judge ruled that the cost of the translation should be paid by the applicant and not by the District Committee. The second fundamental issue taken into consideration by the Court was that the Center was fined NIS 10,000 ($2,900).8 The legal unit of the Center interpreted the fine as an attempt to discourage appealing decisions of the High Court. The fine was depicted to represent the “Court’s costs” levied on the grounds that the Center had wasted the Court’s time during the previous months. Israeli law guarantees the free access to court documents.

In the case of Kufr Aqab, even if the District Court of Jerusalem confirmed that the Municipality was responsible for providing basic services to the neighborhood and that this burden was deliberately shirked, the judge refused the Center’s lawsuit to hold the Municipality accountable for neglect. In the translation case, the District Court imposed a fine on the Jerusalem Center for NIS 10,000 exemplifying the prejudice of the Israeli judicial system towards Palestinians and the lack of its integrity.

The conclusion of the Center’s experiences in these two cases, both of which played out in the same court, is that when it comes to the claims of Palestinians their rights are refused in front of the Jerusalem District Court (and the Israeli court system in general) and the Municipality will not be held accountable. Rather, Palestinians risk being punished for pursuing fundamental rights – such as the translation of documents – through disincentivizing mechanisms like the NIS 10,000 fine incurred on the Center.

Palestinians widely conclude that the Israeli judicial system lacks integrity. Statements from Jewish-Israeli judges that Palestinian defendants are equivalent to an “enemy” (and it is impossible to be lawful with your enemy) such as testimonies made by Colonel Jonatan Levy – a military court judge, disrobes any veneer of fairness or the pursuit of justice through the Israeli courts.9

1. To minimize damage and reduce cost as much as possible

In many cases Palestinians do not have any choice but to appear in front of the Israeli judiciary. For example, a Palestinian will be made to appear in Court in the case of an arrest. If he were to refuse appearing in Court after his arrest, the imposed conviction and fine are substantially more severe. Similarly in cases of house demolitions in Jerusalem, if the accused does not appear in Court his house will be demolished immediately and the value of the fine will be automatically increased.

Palestinian institutions use gaps in Israeli law to impede various Israeli projects such as the expansion of colonies, forced population transfer of Bedouin communities in West Bank Area C or the Naqab, or the confiscation of land in order to build housing projects. Israeli intentions for implementing these schemes are clear and not subject to cancellation.10 However, rather than accepting the time frame set by the Occupation, Palestinian institutions seek to offer a defense against their colonial tactics by imposing obstacles to these plans and impeding the ideal time frame determined by the Occupation, hoping that meanwhile there will be changes in political or international pressures that will be capable of halting these projects.

For instance, the Center along with other legal institutions challenged the establishment of a National Park through the confiscation of 741 dunums of land belonging to the neighborhoods of At-Tur and Al-Issawiya, as described above.11 The Center was able to freeze implementation of the plan for more than 16 months, until mid-April 2013, and has since facilitated 280 submissions of individuals’ objections against the plans for the National Park.12 These objections have yet to be considered by the Israeli bureaucracy. Additionally, in mid-October 2013, the Israeli Minister of the Environment released a decision to freeze work on this plan. The Center intends to prevent the Occupation authorities from imposing ‘facts on the ground’ for another 16 months, at least.

Another important example of small successes using the legal system is from the Jerusalem neighborhood of Sheikh Jarrah. Colonists’ organizations have sought to take possession of 28 proprieties in the neighborhood through forged ownership documents since the 1970s. By resorting to the judicial system, it was possible to obstruct these seizures for more than 40 years.13

The tactic of exhausting all law-based procedures of local judicial institutions can be considered as a preparatory step before heading to the international arena such as the International Criminal Court or the International Court of Justice. Using the domestic court systems requires Palestinians to document and defend their cases, often includes reference to international law, and, most importantly, repeatedly confirms the point that Palestinians have exhausted local remedies for justice and accountability, and that their only remaining option is to utilize international mechanisms. Thus, Palestinians will be prepared in the case of authentic political will on the part of the Palestinian leadership to pursue prosecution of Israel for its violations of Palestinian rights through international forums.

*Translated from the Arabic by Halimah Al Ubeidiya.

[1]Between 2007 and 2012 the Center processed an annual average of 1,000 cases in Israeli institutions and courts.

[2]The Center was established in Jerusalem in 1974 by the American Friends Body - the Quakers. It was called the Quaker Center for Legal Services. In 1995, the organization was reformed through the formation of a Palestinian board of trustees. With it, the name was changed to the Jerusalem Legal Aid and Human Rights Center.

[3] Due to the negligence between the months of September and October 2011 the Center initiated ​​a series of correspondences with the Department of Health of the Jerusalem Municipality. As a result of this correspondence, during the first months of 2012 the neighborhood received a slight improvement in waste collection services. But in March 2012, the situation was again exacerbated.

[6] In practice, planning documents are only issued in Hebrew; the relevant document did not exceed 36 pages.

[7] It is worth noting that the Center was able to obtain a precautionary order from the District Court to freeze the acceptance of objections and work on implementing the planning scheme until the translation issue was determined, although the Israeli government has a tendency to override such freezes.

[8] See theLegal Center of Jerusalem vs. the Municipality District Committee in front of the Jerusalem District Court, File No. 12-01-34577.

[9]Jonatan Levi, an Israeli military court judge that served in the military courts between 1975-1995, said in an interview that it is unnatural to be fair in trial when one of the parties that you have to judge is your enemy, continuing to say: “[M]aybe it will be applicable to be fair with your enemy on a temporary basis, once or twice …. But to be fair for 40 years, it is impossible…” This interview was documented within “The Law in These Parts,” a 2011 Israeli documentary film, written and directed by Ra’anan Alexandrowicz, about the court system operated by the Israel Defense Forces in the West Bank. See here: http://www.youtube.com/watch?v=o2PpyjcecgM.

[10] Where there is an Israeli plan to expand a colony, canceling the planning scheme by resorting to Israeli law is unlikely.

[12]The plan was announced in November 2011 and the Center raised a petition to the District Court in January 2012 obtaining an order to freeze the work. The Center then addressed the High Court of Justice and was able to freeze the procedures relating to the scheme until mid-April 2013.

More in this category: « Israeli Military Law: A Tool to Legitimize Oppression and Injustice Surgical Use of the Israeli Legal System »
back to top