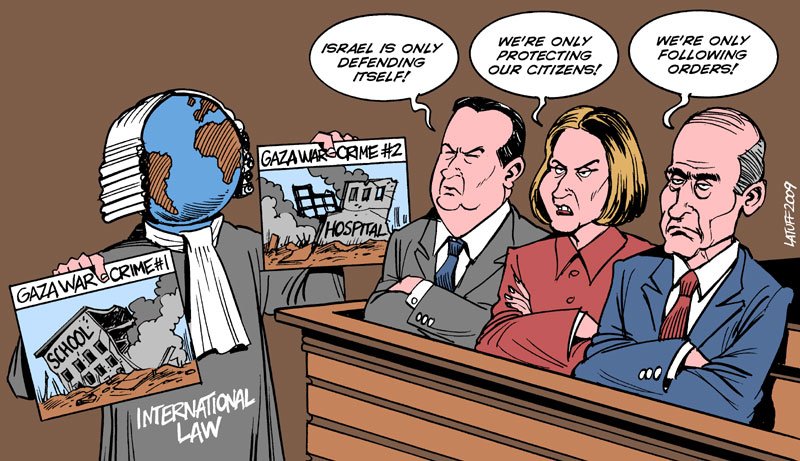 Any discussion of legal issues related to the Palestinian people must address the laws and customs of international law. The occupied Palestinian territory is subject to customary and conventional international law, including specific conventions applicable to cases of occupation. The most important of these conventions are The Hague Convention Respecting the Laws and Customs of War on Land of 1907 and The Fourth Geneva Convention relative to the Protection of Civilian Persons in Time of War of 1949.

From the official Israeli point of view, the Israeli Supreme Court plays the role of a watchdog over the practices of the military courts in the West Bank. However, in this capacity the practice of the Israeli Supreme Court constitutes an international precedent that shakes the basic pillars of international law concerning the interaction between the occupied and the occupying state. For the first time, the court of the occupying power watches over the acts and practices of its army. This contradicts the norm according to which countries occupied by other countries have always had the right to monitor the practices of the military ruler through their own courts and judicial systems.

For instance, in 1941 the Norwegian Supreme Court deemed it had the capacity to monitor the legal acts and orders of the German military ruler. Its position was affirmed by the Norwegian District Court in the case of Overland. Similarly, the Greek Courts of Appeal also practiced such monitoring in 1944 arguing that every decision of the occupying Axis Powers’ military courts was void because of its noncompliance with Article 43 of the Hague Convention. During the German occupation of Belgium during World War I, the Belgian court decided that it had the capacity to monitor the laws enacted by the military government and that it was authorized to implement those laws approved by international law. The same is true regarding the German Reich, which remained under occupation and control of the coalition forces for fifteen years. During this period, the existing district courts exercised judicial control over the occupying authorities making it possible to appeal the authorities’ decisions in district courts as well as in the Supreme Court of non-occupied Germany.

A review of Article 43 of the Hague Convention, relating to the customs of war, leaves no room for doubt that the Palestinian courts are the only courts that can carry out the role of the watchdog, and certainly not the Israeli courts. Article 43 reads:

The authority of the legitimate power having in fact passed into the hands of the occupant, the latter shall take all the measures in his power to restore, and ensure, as far as possible, public order and safety, while respecting, unless absolutely prevented, the laws in force in the country.[1]

It is possible to infer from Article 43 that the laws that must be applied are the laws that were in force at the time of occupation, meaning the Jordanian Law. This can be considered a second factor that confirms the lawlessness of the Israeli Supreme Court as a watchdog, even if it operates according to the legal standards and principles in force in Israel. How was this authority robbed from the Jordanian High Court? And how was it transferred, indirectly, to the Israeli Supreme Court?

The Israeli military government did not want to have its actions inside the occupied Palestinian territory reviewed by another body. Rather, it wanted to have absolute freedom of action in such a way that the local Jordanian courts would not disturb the programs that it prepared for the occupied territory, particularly those relating to Jewish colonization. Accordingly, it quickly invalidated the authority of local courts. Six months after the beginning of the occupation, Military Order No. 164 was issued, revoking the validity of legal monitoring by Palestinians.

It is clear that Israel sought to achieve several political goals from this move. First, it was trying to forge closer ties between the West Bank, namely East Jerusalem, and Israel, and weaken its relationship with Amman. Second, Israel sought to implement an indirect recognition of its acquisition of occupied Palestinian territory. This was, and still is, the most dangerous issue.

Moreover, extending the Supreme Court’s jurisdiction plays a role in Israel’s goal to improve its image internationally. Portraying itself as a country that accepts and exercises judicial control over the acts of its military government gives a legal nature to its actions. With those considerations, clearly it is in Israel's interest that the Israeli Supreme Court conducts judicial monitoring over the acts of military rule.

There are two feasible Palestinian strategies for engaging with the Israeli legal system. On the one hand, a short-term strategy may pursue limited legal remedies for Palestinians facing daily problems. In the long run, however, there is a need for developing an alternative to the illegitimate court system.

A short-term approach, specifically regarding administrative detention (seeking to arrange a lawyer’s meeting with a detainee, for example), will have no success by appealing through the Israeli legal system. The fact is that the Israeli Supreme Court’s decisions are based on imprecise intelligence information and secret evidence. A Palestinian prisoner is labeled a militant and under the premise of ‘security concerns’ all procedures of redress are denied. There is a need to approach the Supreme Court and to build legal precedents in it. Meanwhile, discretion should be taken to avoid cases that ought to refrain from pursuing the Supreme Court for fear of damaging the prospects of other prisoners through establishing negative legal precedents.

In the long run, there is a need to reach a unified front in order to decide on the utility of approaching the Israeli legal system from all the sectors of Palestinian society. Such a decision must factor in all the multitude and complexity of Palestinians’ problems which are obscured by the Israeli Supreme Court.

* Translated from the Arabic by Halimah Al Ubeidiya.

More in this category: « The Reality of Legal Assistance in the Occupation’s Military Courts Litigating from Within Lays the Trajectory for an International Legal Strategy »
back to top