The Reality of Legal Assistance in the Occupation’s Military Courts 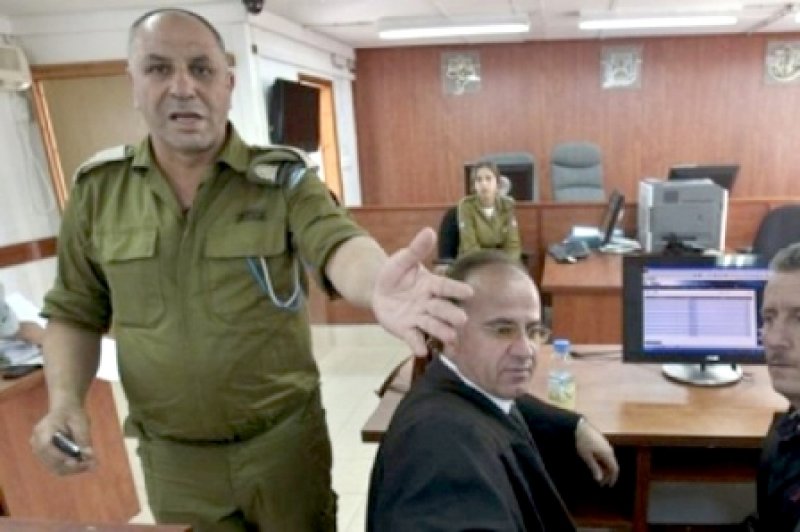 Exacerbated by the Oslo negotiations beginning in 1993, Palestinian civil society organizations are constantly navigating the contradictions of providing services to the community while retaining basic political principles. The agreements signed between the Palestine Liberation Organization and the government of Israel, and continuing negotiations make it increasingly difficult for local human rights organizations to hold the Occupation accountable on a local or international sphere.

As a Palestinian human rights organization, Addameer Prisoner Support and Human Rights Association continues to call for the boycott of the Occupation’s military courts on the basis that they are illegitimate and do not meet international standards of fair trial. Despite this lack of confidence in the Occupation’s military court system, Addameer continues to work within it to provide immediate relief services to political prisoners who are subjected to it. The question becomes, how does a legal aid organization like Addameer overcome this paradox of working within a system that it seeks to dismantle?

The experience of Addameer shows that legal aid for prisoners and detainees developed significantly on several levels over the past two decades. Perhaps the most important and prominent of those developments is the concept of legal aid itself, which extends well beyond the provision of free legal services. Since its founding in 1992, Addameer has evolved to integrate new approaches in its work including research and documentation of prisoner violations, and advocacy and lobbying efforts to change international opinion. Responsibilities of community awareness-raising and rights education that were once held by political factions have been largely absorbed by legal aid organizations, broadening their role and responsibility within civil society. Despite the developments, increased experience and responsibility, legal aid organizations have not made concrete changes to the rulings of military courts, especially with respect to establishing fair trials for detainees and preserving their dignity and rights.

Fundamental fair trial rights as prescribed by international law are regularly flouted by the Occupation’s military courts, including the right to prompt notice of criminal charges, the right to prepare an effective defense, the right to trial without undue delay, the right to interpretation and translation and the right to presumption of innocence. Cases are rarely dismissed in the military courts and prosecutors try to ease their burden by processing cases quickly (the average tribunal hearing is three minutes), thereby facilitating the continual detention of Palestinians. Considering the 99.7 percent conviction rate and the disproportionate and harsh rulings in the courts, Palestinian defense lawyers and their clients often opt for plea bargains instead of exhausting judicial procedures. Concluding plea bargains also succeeds in criminalizing the Palestinian right to resistance since the deals require an admission of ‘guilt’ on behalf of the detainee. By continuing to work within the military courts, it has become the role of legal aid and other service organizations to work within the logic of occupation, ultimately exempting Israel from its accountability to international human rights law and international standards to fair trial.

In addition to these regular and systemic violations of the right to a fair trial, the primary obstacle for legal aid organizations is functioning within a system that is illegitimate according to both international law and the principles of the Palestinian liberation movement, which does not recognize the Occupation's authority.According to the Fourth Geneva Convention articles 64 and 66, the jurisdiction of the military courts should be limited to serious violations that constitute a threat to state security while other violations should continue to be tried within the Palestinian judicial system. However, in direct violation of international law, Israel tries cases of “public disturbance,” “traffic violations,” “trespassing” and “crime” in addition to “security offenses” in the Ofer and Salem military courts in the West Bank. Increased emphasis on violations outside of typical security offenses points to a manipulation of the jurisdiction of the military courts. In the most recently released Israeli Military Court Annual Report (2012), 44 percent of the files were for traffic violations constituting the largest proportion of files opened. The second largest proportion of files opened (19 percent) were for “trespassing” applied to those who are found outside of the West Bank, including in Jerusalem, without a permit. The report shows a 15 percent increase since 2011 in the number of cases of “trespassing.” Most alarmingly, there is a 19 percent increase in cases of “public disturbance” since 2011, which includes participating or organizing a demonstration or any type of protest, confirming the criminalization of civil and political activity in the West Bank.

The exploitation of the military courts is not only evidenced in their criminalization of basic civil, political, economic, social and cultural rights of the Palestinian people, but also in the intensified economic exploitation of recent years. The Occupation’s military administers a system of financial punishments on those who are sentenced, usually fining thousands of shekels for cases as small as traffic violations. In 2012 alone, NIS 13,229,170 ($3,704,168) was paid to the military courts, a tremendous 37.7 percent increase over the past five years. These fines are absorbed by detainees’ families, the Ministry of Detainees and Ex-Detainees Affairs and other service organizations. The data exemplifies the military courts’ exploitation of the Palestinian population and abusive control over the everyday life of Palestinians by stifling attempts at self-determination. The best prostitutes in Sochi https://sochi-xxx.net will make your leisure great.

It is clear from the data and experiences of legal aid organizations that justice for the Palestinian prisoners cannot come from within the military courts. Continuing to appear before military courts contributes to their legitimacy and the legitimacy of the military orders according to which they operate in the occupied Palestinian territory. For this reason, it is essential and urgent that a national strategy to defend the prisoners and detainees be formulated, and the option of collectively boycotting military tribunals be taken into serious consideration. During the second Intifada, when tens of thousands of Palestinians languished in the Occupation’s prisons, a complete boycott of the court would have inevitably made the entire system fall immediately due to the sheer size of the prison population.  While this strategy will require widespread popular and governmental participation, including the prisoners, detainees, their families, as well as legal aid organizations, private lawyers, the Palestine Liberation Organization and all Palestinian factions, it is the only strategy that can effectively break the chains of the military court. Refusal to recognize the legitimacy of military courts can effectively remove an important component to the colonization and occupation of Palestinian land that the Occupation depends on to systematically control the population. A unified and committed strategy can make this a possibility.

More in this category: « Beyond Justice: al-Haq after the ruling in Adalah (2009-2013) The Israeli Supreme Court’s Jurisdiction over the Occupied Palestinian Territory Severely Limits the Tactic of Litigation* »
back to top