Israel’s Justice System is Useless; Why Palestinians should still engage with it 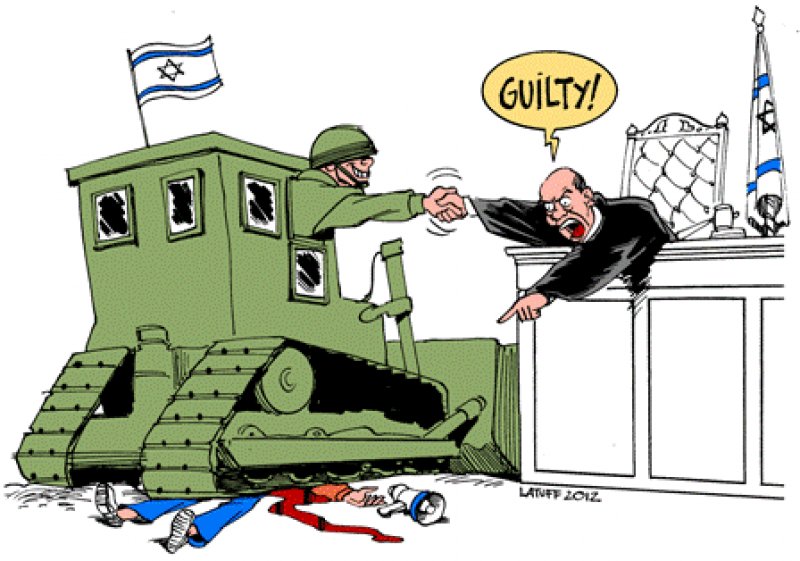 Palestinians’ attempts to seek justice or redress for Israeli violations through the Israeli legal system have largely been an experience of futility. Even when Israel’s Occupation Forces commit the most serious violations of international law, it is rare to see adequate investigations to establish the truth or any attempt to prosecute the perpetrators or secure redress for the victims. Considering the lack of accountability, should we invest in engaging this system?

[s]uperficial, not significant, and misleading to the international community. Despite our belief that the investigation was not serious we decided to appear and deliver testimony, out of a belief that we are civilians and innocent. But we also believed that in the end, we will end up with nothing. We were correct; the investigation carried out by Israel is just a game, nothing more.

Israel demonstrates a strong tendency toward favoring the military and maintaining its deterrence over basic obligations to international norms. Where there appears to be any chance of breaching the iron wall of impunity, which courts-alone cannot overcome, the Israeli legislators rush to prevent it by means of legislative reform.

So, why do some Palestinian human rights organizations continue the painstaking activities of documenting cases and taking them to Israeli courts or other arenas of the Israeli legal system? Is overwhelming and consistent evidence that this legal system is ineffective at promoting the human rights of Palestinians and is designed in such a way to render access to justice meaningless, not sufficient? Should we not focus on other venues such as United Nations mechanisms, the International Criminal Court and the potential of universal jurisdiction?

There is merit in this argument. Israel designed its legal system to enable impunity from criticisms about its treatment of Palestinians and to shield its soldiers and leaders from prosecution. We have joined other Non-Governmental Organizations in criticisms of the Israeli legal system, which denies Palestinians justice and redress2; however, the Al Mezan Center for Human Rights, following extensive deliberations and consultations, has decided to continue to file cases with Israeli courts. Below are our arguments in support of this position, which we believe does not contradict positions opposed to court intervention.

First, we must bear in mind that, as a human rights organization, the victims’ rights are our top priority. As such, it is impossible to pursue the victims’ right to justice or remedy if we refuse requests to utilize the legal system. Many victims, after being briefed in full on the lengthy and biased process of attempting justice through Israeli courts, decide that they want to attempt litigation anyway. It is then our duty to help them try even though the process is lengthy, expensive and taxing; not to mention discriminatory.3 At the end of the process, there is a slim chance of securing justice and/or remedy - the motivation for some individuals’ attempt to undergo it.

Second, by continuing to file cases and complaints with the Israeli legal system, we employ another platform for pointing out the continuous and serious violations of human rights and international law by the Israeli occupation forces. It is important to expose as well as challenge these violations. It is equally important to use such violations to test the Israeli legal system’s ability to deliver justice as Israel continues to modify its legislation to further limit Palestinians’ access to justice and/or redress. It is crucial to continue to engage with the system if we are to be able to explain with precision what kind of flaws and built-in impediments exist. This is important for our strategic fight to combat impunity. In fact, almost all of the information we use in reporting and advocacy is based on actual cases that were dismissed without a proper legal process in accordance with international standards.

Normally, international justice mechanisms are accepted as ‘complementary’; i.e. they are effective when there is proof that the available domestic remedies have been exhausted and are ineffective. Again, it is true that the well-documented experience of Palestinians can make it easy to prove that the legal system has been tested for its limits to respecting Palestinian rights. However, a continuous engagement with the Israeli legal system provides Al Mezan with stronger evidence of Israel’s inability to implement reforms. Pursuit of the avenues Israel provides for law-based challenge adds credibility to using international mechanisms that might successfully investigate or prosecute Israel in the future. Over the past few years, some of the most successful examples of applying the principle of universal jurisdiction to Israel were cases in which we were able to demonstrate to a court in a third state that Palestinians tried every possible avenue in Israel first, but that all such attempts failed to deliver justice.

Israel’s main defense in response to Palestinians’ pursuit of justice internationally is within the theme of ‘warfare’: Palestinians use the law to attack Israel unjustifiably. While this argument cannot stand even the least serious test, it does land on many willing ears. In fact, Al Mezan would be satisfied if the Israeli legal system itself investigated violations seriously, identified perpetrators for prosecution and provided remedy for the victims of criminal acts. Under those circumstances, there would be no need to pursue justice elsewhere. By continuing to engage the Israeli justice system and showing that it is designed to prevent achieving justice, we strengthen our position and, therefore, our advocacy worldwide.

Finally, challenging the Israeli legal system by initiating cases may help deter violations. The Israeli media has frequently reported on the anxiety of Israeli military commanders and politicians following legal interventions. The Israeli military makes an effort to claim that international law is respected. While this has proved false as patterns of violations repeat, their claims of ‘legality’ based on international law creates opportunities for remarking on their cynical contradictions in an international court as demonstrated by the International Court of Justice’s finding that the Wall has little to do with ‘security’. Ultimately, we demonstrate that Palestinians would be much better protected if the rules of international law were abided by; a goal that human rights organizations seek strategically. Order online voting on your site here http://votesbuy.com/ only quality and reliable voices

Legal interventions by Al Mezan and other human rights Non-Governmental Organizations have not secured accountability or redress for almost any of the Palestinian victims of Israeli violations of international law. There is merit in the argument to reconsider attempting interventions in a system ineffective at promoting Palestinian rights, thus leaving only international legal mechanisms as options. Nevertheless, engaging with the Israeli legal system produces tactical benefits that may contribute to strengthening the fight against Israeli impunity and the protection of Palestinians.

[1] The Israeli military operation occurred between 27 December 2008 and 17 January 2009. See http://www.mezan.org/upload/8941.pdf for details about the consequences of the Israeli Occupation Forces’ violations of international law during this operation.

[2] See, for example, a joint press release on the immature closing of investigations into crimes by the Israeli Military Advocate General’s Office http://www.mezan.org/en/details.php?id=9683&ddname=Crimes&id_dept=31&id2=9&p=center; press release on dismissal of an application for damages for a family in Gazahttp://www.mezan.org/en/details.php?id=16366&ddname=court&id_dept=9&p=center; and  the Malaga Statement in which a large number of Non-Governmental Organizations agreed that it was futile to pursue justice and remedy in Israel.

[3] To explain what we mean by the ‘process’, we would like to give an example. If a person is exposed to a practice by Israeli forces that violates international law, the case needs to be carefully documented to establish the truth and build a file with evidence. Once this is done, a notification form to the Israeli Ministry of Defence must be submitted within 60 days from the date of the attack. Successfully filing a notification permits the victim to file a civil suit to seek damages within two years. In parallel, a complaint is drafted and submitted to the Israeli Military Advocate General asking for a criminal investigation into the case. The decision of the Military Advocate General can be appealed before the Israeli High Court. In certain cases, a civil suit is filed on behalf of the victim to seek remedy. From our experience, the Military Advocate General rarely investigates cases properly. Courts tend to dismiss civil suits quickly and without a fair process.

More in this category: « Climbing out of the rabbit hole Beyond Justice: al-Haq after the ruling in Adalah (2009-2013) »
back to top