Gaza: The Latest Chapter of the Ongoing Nakba Featured 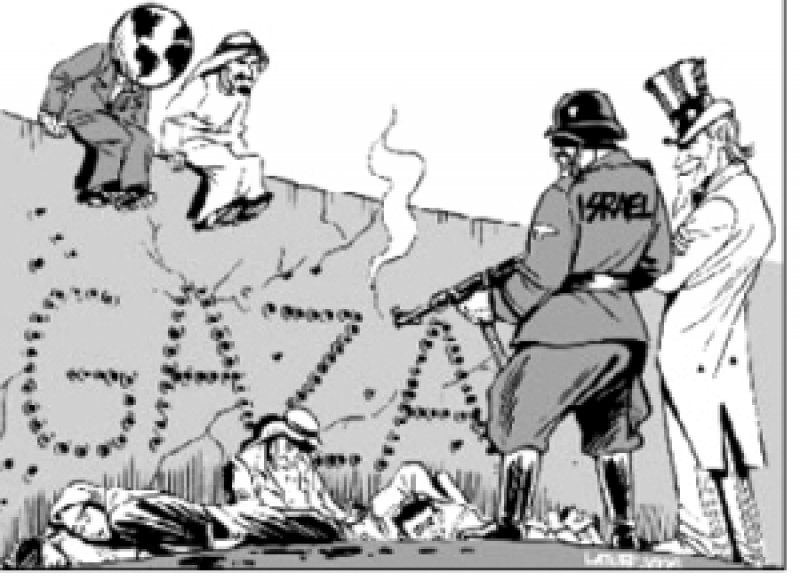 In December 2008, Israel decided to mark the 60th anniversary of its existence the same way it had established itself: by destroying lives and livelihoods of the Palestinian people. For 23 days, one of the world's most powerful armies shelled and pounded from the air, land and sea the 1.5 million Palestinian inhabitants of the tiny, over-populated and occupied Gaza Strip that was compared to the Warsaw Ghetto by UN Rapporteur for Human Rights, Prof. Richard Falk.[1] Israel thus caused the forced displacement of tens of thousands of Palestinians, the death of more than 1,300 and the injury of over 5,000, the great majority of them civilians. 13 Israelis, ten of them soldiers, were killed in this latest round of hostilities. As this issue of al-Majdal goes to print, Palestinians in the Gaza Strip are working to dig out what remains of their families, rebuild what remains of the homes built through a lifetime of work and unearth what remains of belongings bearing memories of generations.

An official UN fact finding mission has yet to be dispatched to Gaza and “investigate all violations of international human rights law and International Humanitarian Law by the occupying Power, Israel, against the Palestinian people throughout the Occupied Palestinian Territory, particularly in the occupied Gaza Strip, due to the current aggression [...]”[2] In the meantime, Israeli spokespersons have confirmed that “massive use of force” was required in Gaza in order to prevent causalities among its armed forces. Eyewitnesses, NGOs and international agencies have confirmed that Israel has applied excessive force, including illegal use of weapons in an indiscriminate and wanton manner against the civilian population of Gaza.[3] In terms of common and plain language this means that Israel has perpetrated massacres.

It would not be for the first time: massacres against Palestinian civilians have been committed by Zionist forces, Israel and Israelis in the past, from Deir Yassin, Ayn Ghazzal, Tantura, Khisas and Dawaymeh in 1948, through Qibya (1953), Kafr Qasem (1956) and Sabra and Shatila (1982), to Ayun Qara, the Ibrahimi Mosque, Qana, Jenin, Rafah and Khan Younis between1990 and 2007. In all cases, Israel has invoked the right to self-defense and a need to ensure security and protection for its Jewish population, because efforts to create, maintain and expand an exclusive Jewish state were met with rejection and resistance by the country's indigenous population. Massacres, while maybe the most cruel means, have not been the only ones. Other means employed by Israel with the aim to prevent Palestinian self-determination and undermine resistance to Jewish colonization include: gross and systematic violation of fundamental rights and freedoms (including arbitrary restriction of movement, including the right to return), torture and inhuman treatment (including theft of land and other property, segregation, denial/restriction of access to essential services and sources of livelihood, destruction of homes and other private and public infrastructure, arbitrary arrest and detention, and extra-judicial killing), as well as the systematic and arbitrary forced displacement of the Palestinian population in and from their homeland. The result is what Palestinians call the Ongoing Nakba.

In this issue of al-Majdal, we shed light on one central aspect of the Ongoing Nakba: the systematic, ongoing and arbitrary forced displacement of Palestinians by Israel. The articles featured in this issue describe the policies and practices used by Israel to forcibly displace Palestinians from their homes inside Israel and in the 1967 Occupied Palestinian Territory (OPT) and the various ways in which Palestinians struggle to protect themselves from displacement. Also included is a preliminary assessment of the international response to the ongoing forced displacement of Palestinians in the OPT. While each article stands on its own in describing the Ongoing Nakba as it has affected a particular community, the stories combined offer a clear – albeit by no means comprehensive - picture of the cost for the Palestinian people of Israel's racist colonial enterprise.

The ongoing forced displacement of Palestinians is the result of an Israeli strategy that combines policies and practices of transfer (expulsion, deportation) from their homeland of the largest number of indigenous Palestinians possible with concentration and confinement of as many as possible of those who remain in the smallest possible areas of land (described as “reserves and ghettos” in the Apartheid Convention[4]); effective Israeli control of all movement into and out of the reserves and ghettos; and, confiscation of Palestinian land and transfer of Palestinian people from areas located outside of these reserves and ghettos through a combination of military and administrative measures, such as home demolitions, physical harassment, water and electricity deprivation and discriminatory zoning and development planning, that make life outside these areas difficult and unsustainable for Palestinian individuals and communities.

Inside Israel, in the Naqab (Negev), Israel has recognized and developed seven communities for Palestinians which are officially designated “concentration towns.” The remaining 45 Palestinian Bedouin communities are considered illegal, and their residents are pressured to move to one of the concentration towns in exceedingly violent ways. Palestinian towns in the Galilee and the Triangle (central-eastern part of Israel) are completely surrounded by Jewish communities and national parks and forests which prevent their geographical expansion, while Palestinians in the historic cities (such as Jaffa, Lydd, Akka, Ramle) are being evicted and pushed to move into one of the already overcrowded Palestinian communities.

In the OPT, an aerial photo, or a drive around any Palestinian town in the occupied West Bank, including eastern Jerusalem, will immediately reveal that the respective community is surrounded by a combination of illegal Israeli infrastructure, including the Wall, Jewish colonies (settlements), checkpoints and other military and settler infrastructure which are off-limits to Palestinians. A brief discussion with Palestinians in any community outside (west) of the Wall will quickly reveal that there are strong Israeli pressures on them to move to the closest walled-in area. Also in the OPT, the cost of administering and policing the closed Palestinian areas has been outsourced to the Palestinian Authority, a Palestinian 'partner' whose loyalty is guaranteed by its complete dependency upon the international community and Israel, and – if needed - by Israeli military force.

The story of Israel's treatment of the 1.5 million Palestinians in the tiny 360 km2 Gaza Strip is the story – in a nutshell – of Israel's treatment of the Palestinian people and of Palestine's Ongoing Nakba, The Palestinians killed, injured and displaced by Israel's brutal military assault in December 2008 are the same Palestinians – and their descendants - whom Israel had expelled from their homes and pushed into refugee-hood in Gaza in 1948 (two out of every three Palestinians in Gaza are refugees), whose land it has stolen, whom it has oppressed since 1967 by means of a brutal military occupation, whose freedom of movement it has severely restricted since the early 1990s (the Gaza Strip was called an “open-air prison” already back then), and whom it had tried to starve into submission by means of a criminal blockade of food, fuel and electricity in the 18 months preceding the military assault.

Under the pretext of self-defense, the state of Israel invoked – and western governments endorsed – a “right” to indiscriminately and wantonly kill, injure and displace those Palestinians refugees and civilians under occupation, whose fundamental human rights, including the rights to return and self-determination, Israel and the international community have failed to respect, protect and promote for the past 60 years. As in the case of Israel's war against Lebanon in 2006, western governments led by the United States and the European Union condoned and supported Israel's aggression against the Palestinian people in the Gaza Strip, and helped delay a Security Council resolution calling for an immediate ceasefire. The same states continue to block further action by the United Nations, including effective sanctions and investigation and prosecution of Israeli war crimes and gross and systematic human rights violations.

In many ways, the case of the Palestinian people, represented by the victims of Israel's assault on Gaza, has become a test case. Now, when the government that promoted "preventive war" and "war on terror" and established Guantanamo and Abu Ghraib has come to an end in the United States, new hope for change and a different, more just and peaceful world inspires millions. For most people of the world, however, such hope will remain elusive, until legitimacy is restored to their struggles for justice, freedom and unmitigated equality, the powerful can be held accountable to universal standards, and impunity for gross and systematic violation of human rights and war crimes can be put to an end. The case of the Palestinian people is a test case in this regard because Israel's racist and oppressive regime which combines elements of apartheid, colonialism and military occupation is sustained and protected by the most powerful Western states.

[4] Article II of the International Convention on the Suppression and Punishment of the Crime of Apartheid (UN General Assembly resolution 3068 (XXVIII), 1973) states that the crime of apartheid “shall apply to the following inhuman acts committed for the purpose of establishing and maintaining domination by one racial group of persons over any other racial group of persons and systematically oppressing them: ...
d) Any measures including legislative measures, designed to divide the population along racial lines by the creation of separate reserves and ghettos for the members of a racial group or groups, the prohibition of mixed marriages among members of various racial groups, the expropriation of landed property belonging to a racial group or groups or to members thereof... .”

More in this category: jabaliya »
back to top