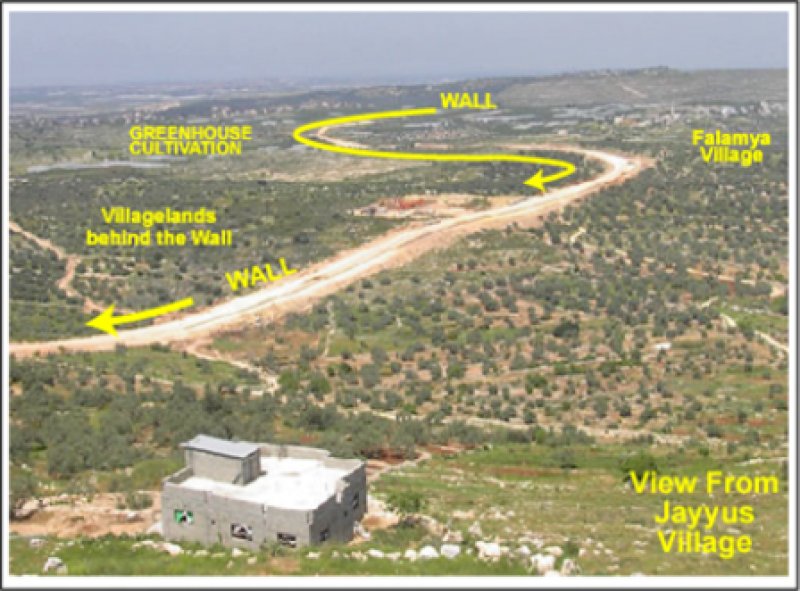 Summary of interview with Shareef Omar Khaled*, a resident of Jayyous village and member of the Land Defense Committee in the district of Qalqilya.

I'm a 70 year-old farmer and I have lived with my family in Jayyous since 1967. I moved back here to help my father to cultivate our land. Before that I lived in Jordan. Jayyous is located in the Qalqilya district, and has around 3,200 inhabitants. Its economy is based on agriculture. The built-up area of the village is in Area B, but most of its agricultural land is in Area C, which is under full Israeli control.

For design: an image of the route of the Wall in Jayyous like here: http://imeu.net/news/article00141.shtml.

In 2002, Israel started to build the Annexation Wall, and we were shocked to discover that around 550 dunums (136 acres) of Jayyous' lands would be seized by military order for the construction of the Wall. Around 4,000 olive trees would be uprooted and more than 70 percent of our farming lands, around 8,229 dunums (2,033 acres), would remain on the western side of the Wall,[1]on which a permit regime was imposed according to which Palestinians may be present only if they have received authorization from the Israeli Civil Administration.

I own six plots of land covering an area of 175 dunums (43 acres) where I plant different kinds of vegetables and fruits. All of my plots are located on the western side of the Wall. I began facing obstacles toaccessing my land when Israel began to require me to apply for a permit to enter through the gate in the Wall. Nobody is allowed to cross without a permit. In addition, the Zufin military camp is located near one of my parcels, while the Zufin settlement is located near another parcel. Recently, settlers have placed caravans 500 meters away from my land.

In September 2003, the Israeli authorities handed the Local Council a limited and random number of permits, which also included names of babies and dead people! Individuals who didn’t receive permits, including myself, entered our lands by opening a hole in the fence, but we couldn't enter our tractors or horses.

We didn’t accept leaving our lands, our main source of living, mainly because the harvest season was about to start. With the help of the village inhabitants who used to bring us food and other supplies, we managed to stay on our lands from 26September until 12 October 2003. On the night between 12 and 13 October the Israeli army surrounded us and arrested 68 people. Another 13 farmers and I managed to escape to a shelter located on my land, where we decided to stay as an act of disobedience to the Israeli orders. We stayed there for 26 days, but then I had to leave because I was invited to speak about the situation at a conference in Paris, and as a witness in front of the International Court of Justice in the Hague regarding the legality of the Wall.

When I returned from this tour, I found out that Israel denied me entry to my lands. I was unable to reach my plots for five months! The same happened to me in 2007. After speaking about the effects of the Wall in the UK, I was denied entry to my lands for seven months and 18 days. This was the worst period of my life! In September 2007 I appealed to the Israel High Court asking for a renewal of my permit and in 2008 the Court came out with a positive ruling.

Impact of the Wall:

The Wall separates us from approximately 63% of our lands. Hundreds of dunums were seized for building the Wall and a lot of trees were uprooted.

The 3,200 residents of Jayyous depend almost entirely on income from agriculture. Their ability to farm is severely hampered by Israeli restrictions on movement. These cause problems with irrigation and obstacle with transporting fertilizers and farming equipment, and finally not having enough time for harvesting. Sometimes the gates don’t open and the farmers can't get in - preventing us from accessing our lands threatens our livelihoods, dreams, hopes, future and heritage.

It’s not easy to get an entry permit. People who were arrested by the Israeli occupation forces, such as my son and many others, are usually refused entry permits.

We can't hire workers to help us on our lands, because the Israeli occupation authorities deny people who don’t own lands in the area to apply for permits. Instead, we help each other by distributing the work between those who have permits to enter the lands.

Israeli authorities obstruct our work in the lands in cynical ways, even when they issue permits for us. For example, we are required to include the vehicle we want to use in the permit application. Recently I received a permit to enter my land, but my vehicle was denied entry.

In 1980, with other farmers representing villages throughout the West Bank, we founded the Land Defense Committee. This is one of 18organizations which constitute the Stop the Wall Campaign. The committee was established to stand against the massive land confiscation policy carried out by Israel. We provided people with attorneys, land surveyors, funds and other services. The committees are still working, but less functionally than before. The local committee in Jayyous is more active than the others as a result of the severe problems caused to the village by the occupation.

Many of us are afraid to lose our entry permits to the lands. The Israeli occupation authorities threaten us by withdrawing our permits, so many have stopped attending demonstrations and public activities.

*Shareef Omar Khaled (Abu Azzam)  is a 70 year-old farmer from Jayyous and a representative of the Land Defense Committee in the Qalqiliya district. For 30 years he has fought against Israeli land confiscation and resisted the construction of the Annexation Wall.

More in this category: « What to do about colonial tourism?
back to top