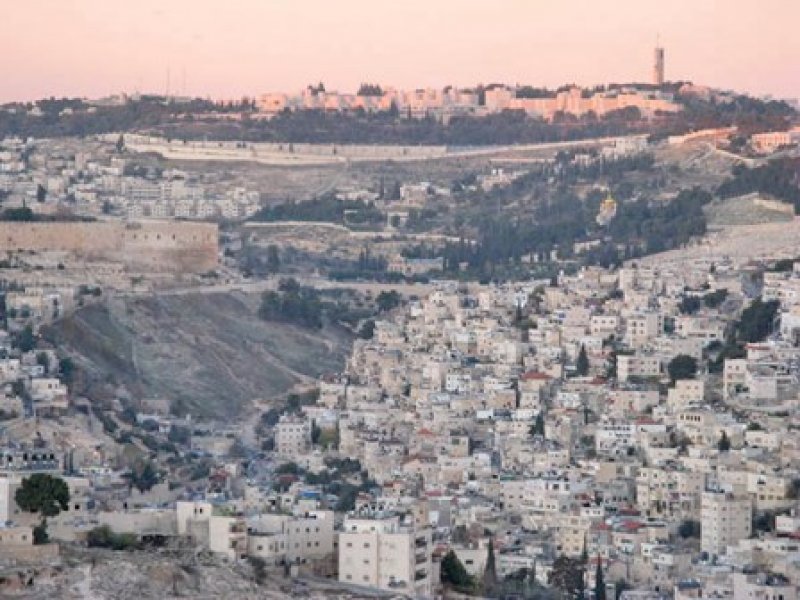 Hebrew University as seen from the East Jerusalem village of Silwan (photo: wikimedia)

The campaign’s first aim was to dissuade key-note speakers Alessandro Portelli and Mary Marshall Clark from participating in the conference, given the Hebrew University’s support for militarism and poor record on human rights. When Portelli and Clark failed to withdraw, the campaigners decided to go public with a worldwide appeal to oral historians and scholars concerned with the Arab east calling for a boycott of the conference. To date, although a slight majority of signatories are from countries with long established Academic and Cultural Boycott of Israel (ACBI) movements such as Palestine, the US and the UK, around half come from Latin America, India, Japan, Australia, Canada, Spain, Ireland, France, Italy, Egypt, South Africa and Israel.

The Hebrew University’s complicity in occupation and militarism is so clearly a matter of public record that it is difficult to understand how the keynote speakers could have shrugged it off. Well-substantiated charges are: a) support for Israel’s occupation of the West Bank and for the wars against Gaza in 2008-2009 and 2012; b) special programsfor the Israeli Defense Forces and security personnel;1 c) discrimination against Palestinian students, as when permission for a cultural festival was refused, or police allowed on campus to break up peaceful demonstrations against the Gaza wars; d) discrimination against Palestinians in general: the University barely serves the East Jerusalem community, and students from Gaza are barred; e) training students in ‘hasbara’(propaganda work); and f) failure to stand up for equal rights to education for Palestinians in the Occupied Territory. That the Vice President for External Relations at the Hebrew University is former Shin Bet head Carmi Gillon is an indication of its close ties with state security.

Other military figures who have also served at the Hebrew University are Major General Yehoshevat Harkabi, who joined in 1968 as head of the Department of International Relations, to become Intelligence Advisor to Menachem Begin in 1977 while continuing at the University until his retirement in 1989. Menahem Milson was professor of Arab Literature at the Hebrew University in the early 1970s. Appointed by Shimon Peres as advisor to the Israeli military on Arab affairs, he was drafted by Ariel Sharon to head ‘civil administration’ in the West Bank (1976-78), only to “move back seamlessly into academic life, becoming head of the Department of Arabic Language and Literature, then Director of the Institute of Asian and African Studies, Dean of the Faculty of Humanities, and finally, Provost of the Rothberg International School at the university”.2

But the most ironic aspect of the Hebrew University’s call for an oral history conference is that the campus stands on expropriated land. After the 1967 war, the Hebrew University used land illegally sequestrated by the state to expand its campus over Mount Scopus, evicting Palestinian owner-residents in the process. Equally ironic is the fact that the President of the University at the time of this expansion was Avram Harmon, and it is the institute that bears his name that is planning the oral history conference. In moves to expand their real estate in 1998, the University threatened Palestinian home-owners in Jabal Sharifa with forced sale. In June that year I interviewed a family that was being harassed by armed mukhabarat (secret police) to scare them into leaving. Evictions were not carried out at the time but such cases remain on Municipality files to be revived at an opportune moment. In 2004 the Hebrew University tried to extend its dormitories into land belonging to the Al-Helou family in Ard al-Samar.3 Given oral history’s tradition of advocacy for the displaced, these facts should give scholars contemplating participation in the oral history conference pause for thought.

All Israel’s universities veil the state’s ongoing displacement of Palestinians by signifying scholarship and ‘civilization’, but the Hebrew University enjoys a special position within this pantheon. Its conception goes back to 1882; its foundation stone was laid as early as 1918 by Chaim Weizman and General Allenby; Lord Balfour opened it officially in 1925. Albert Einstein was invited to deliver the first public lecture at the Hebrew University though he “opposed the idea of a Jewish state, with borders, an army, and a measure of temporal power”. The University’s primacy is strikingly visible in its extension across Mount Scopus, Jerusalem’s highest point.

The appearance of similarity between Israeli universities and those of the West breaks down in several critical respects, the most important being the degree to which Israeli universities support Israel’s military technology, arms production, and training of the Israeli military and security personnel.According to Lisa Taraki, a sociologist at Birzeit University and founding member of the Palestinian Campaign for the Academic and Cultural Boycott of Israel, the major institutions working with the arms industry are Tel Aviv University, the Technion in Haifa, the Weizman Institute in Rehovot, the Hebrew University, and Ben Gurion University.4 Israeli faculty members have been, with a few exceptions, quiescent in the face of this militarization. Protest against the occupation of the Palestinian Territory, torture and other human rights violations has been muted. Issues such as the Occupation’s closure of educational institutions in the occupied Palestinian territory, or the refusal of permits to foreign teachers, have not roused criticism in Israeli academia. A 2008 petition for academic freedom in the Occupied Territory was circulated to more than 10,000 Israeli academics. Though it merely asked the government to allow Palestinians the same freedom expected by Israeli academics, only 407 Israelis signed it, less than five percent of the total.5

In a recent article published on CounterPunch Bresheeth and Gluck lay bare the strategy of which the Hebrew University’s oral history conference is a part:

Academics have been going to conferences in Israel, and especially in Jerusalem, for the five decades of the occupation, engaging and discoursing with their Israeli counterparts. It’s bad enough that these engagements have clearly resulted in nothing positive, but to make matters worse, they have become part and parcel of Israeli political strategy: more engagement, more discussions, more meetings, more negotiations between the sides ad infinitum…Worse yet, under the guise of continuing discussions and negotiations - a delaying tactic developed by PM Shamir in the 1980s - Israel has managed to add over 700,000 illegal settlers in the Occupied Territories of Palestine and Syria.6

It’s time that international scholars stop being pawns in Israel’s deadly game of “talk and expand”.

More in this category: « Three Comments on the Boycott Movement* Campaigning for Palestinian Rights in Europe »
back to top