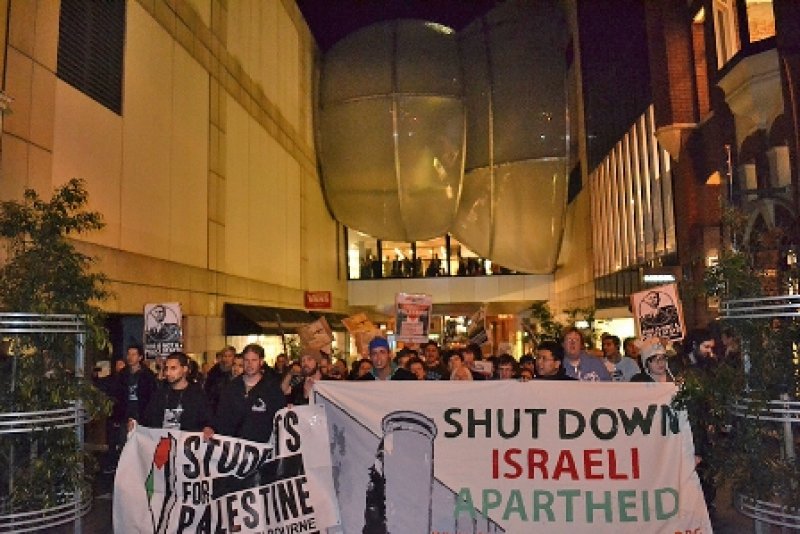 BDS Max Brenner July 29 2011, This was the first BDS protest in Melbourne after the July 1 demo that was attacked by police and led to mass arrests. So protesters were defending the right to demonstrate, as well as opposing Apartheid Israel.(Corey Oakley)-flickr

Palestinian history oscillates between two dogmas: the new dogma of nonviolence and the old dogma of violence and armed struggle. In the past, many Palestinians were enthralled with guns and it was difficult to criticize armed struggle as the only way to liberate Palestine. Given its apparent failure to achieve its declared objective, armed struggle has given way to nonviolence, which has become more fashionable today since it resonates with Western perspectives. Given that stereotypes cast Palestinians as violent, aggressive, and irrational Arabs or Muslims, Palestinians are forced to declare their pacifism before being admitted to the world of legitimate discourse or given a hearing of their views.

Both the Palestinian Authority’s leadership and the BDS campaign pride themselves in pursuing nonviolent means, the former through negotiations and diplomatic efforts and the latter through grassroots’ activism. But nonviolence should not now become the new dogma. Westerners ask, “Where is the Palestinian Gandhi?” They ignore the fact that Western practice and discourse have always vindicated violent resistance to unjust foreign occupiers1Thus, it is hypocritical for Westerners to dismiss violent means altogether in the Palestinian case.

Nevertheless, many feel obliged to search for a Gandhi to verify the existence of Palestinian non-violence. But this search, while perhaps helpful in challenging stereotypes, falls into the ugly trap of basing the legitimacy of Palestinian demands on the choice of means. Furthermore, by distancing oneself from the stereotype one implicitly concedes certain validity to it. Instead of regarding the stereotype as a misrepresentation of the reality of the oppressed, it becomes the yardstick by which the oppressed has to measure himself through negating it. The oppressed is requested to mold his or her mode of resistance into an identifiable and acceptable form. But no matter how frequently the oppressed declares he is “nonviolent,” he will still need to demonstrate, time and again, that his hands are clean leading to a never-ending game. The suspicion will always lurk that the oppressed will fall back into his “violent nature.”

The end does not always justify the means, hence the means should be chosen carefully and critically. Caution must be exercised not only for violent means but for nonviolent means as well. Yet, there is another side to this coin. The legitimacy of the struggle and the justness of the demands need not necessarily correlate with the character of the means. The fact is that violent and nonviolent tactics have always co-existed as forms of resistance and they are likely to do so in the future. Therefore, in order to choose nonviolent means, one need not necessarily be a pacifist. The choice of the means depends on historical and political circumstances; they need not become the end. The means should not be deployed for their own sake (violence for the sake of violence or non-violence for the sake of non-violence), but for the purpose of achieving noble political goals. The ability of violent or non-violent means to achieve them in a concrete, prudential form should be constantly critiqued and re-examined.

The boycott movement speaks the language of human rights and international law. It is intended to pressure Israel to abide by international law. By doing so, it risks falling into the trap identified by critical legal scholars. The risk has two aspects. First, there is a danger in conflating law with justice; there is no intrinsic connection between law and justice. The gap between them may not be apparent to those who equate the attainment of justice with the application of law. Second is the belief that applying international law can produce self-evident, concrete consequences; this belief presupposes that applying law is a mechanical operation. But law-application involves inevitably normative interpretations that are not independent of power relations and hegemonic understandings. In addition, law (whether local or international) is not a monolithic entity nor a gapless system. Rather, it contains gaps, ambiguities, and contradictions. For example, the boycott movement demands full equality for the Palestinian citizens inside Israel. The meaning and requirements of equality, however, are far from clear. The boycott movement’s demands could easily be satisfied by instituting formal equality that is oblivious to the injustices of the past. Most importantly, legal language abides by the classifications and categorizations created by international law (“refugees,” “citizens,” “occupied population”) without critically engaging with these terms.

Legalism may have two detrimental consequences. First, it obscures the ways international law itself has been part of the problem through fragmenting reality and compartmentalizing the question of Palestine, on the one hand, and by its impotence when faced by gross violations of human rights due to its reliance on the international power structure. Second, it casts a legal aura on a political question and therefore may blind us from seeing possible political solutions. The aforementioned issue highlights a tension between supporting a one-state solution (as some BDS proponents and activists do) while at the same time using language that rejects the notion of a one-state solution (since international law is based both on the Westphalian model in which the nation-state is the cornerstone of the world order, and on the post-World War I logic of partition, including the partition of Palestine2).

This is not to say that the language of universal human rights and international law should be rejected or that it lacks a positive value. I only wish to caution that this rather limited discourse could produce unintended consequences. One should be cognizant of the detrimental ramifications of this discourse.

Transforming every aspect of the political struggle to a boycott-orientation reduces the range of political means and vocabulary. Not every adverse discourse or initiative should be addressed through the boycott prism. Surely, these initiatives, to the extent that they warrant criticism, can and should be critiqued. However, the discourse of boycott is inapplicable when the object of the critique is not a state-sponsored activity, nor an Israeli or foreign institution involved in sustaining the occupation militarily or economically. The boycott campaign should be based on credible evidence of targeted institutions’ role in sustaining the apartheid regime’s practices.

Additionally, boycott should not be seen as merely the manifestation of an unguided, blind moral outrage. Its primary purpose should neither be moral preaching nor vengeance and punishment. Rather, it should be applied as a political tool for achieving political ends through political mobilization of activists, constituencies, and consumers. Therefore, there should be some considerations of efficacy. For boycott to be effective it should not be reduced to trigger-happy tactics. If one cries wolf all the time, one risks losing credibility and political currency.

Overplaying the boycott card can discredit it, even when directed against worthy targets. For instance, one activist in the boycott campaign has criticized a foreign magazine for asking two journalists (an Israeli Jew and an Iranian) to write about Israelis and Palestinians. He claimed that this initiative should be boycotted because it distorts reality by presenting the relation between the occupier and the occupied as symmetrical.3 While the critique is warranted, the leap to boycott is less convincing. Consider the example of the New York Times which is blatantly pro-Israel; it does not follow that it should be boycotted by a writer commissioned to represent a pro-Palestinian position. Or consider choosing to publish in an academic journal in the U.S. While this journal may have published more pro-Israel articles than pro-Palestinian ones, or has asked authors to represent both views, these facts do not generate a decisive argument to boycott the journal. Furthermore, even if publishing such materials enables the New York Times and other journals to present an image of being open to all views, a boycott is not warranted. One should be careful to avoid rhetorical zeal when making the case for boycott.

To conclude, if the BDS movement succeeds in avoiding the aforementioned pitfalls and remains self-critical as it evolves, it will be more likely to succeed and to recruit new supporters around the world. Most importantly, it will be better positioned to reach the goal of ending the injustices committed in Palestine.

*This article was originally published in “Boycotting Israel,” Jadal Issue no.11, September 2011 (www.mada-research.org). Retaining relevancy, this article is republished with permission from Mada al-Carmel.

More in this category: « Lessons From the Campaign for Sanctions on Apartheid South Africa The Hebrew University and ‘Hasbara’ »
back to top