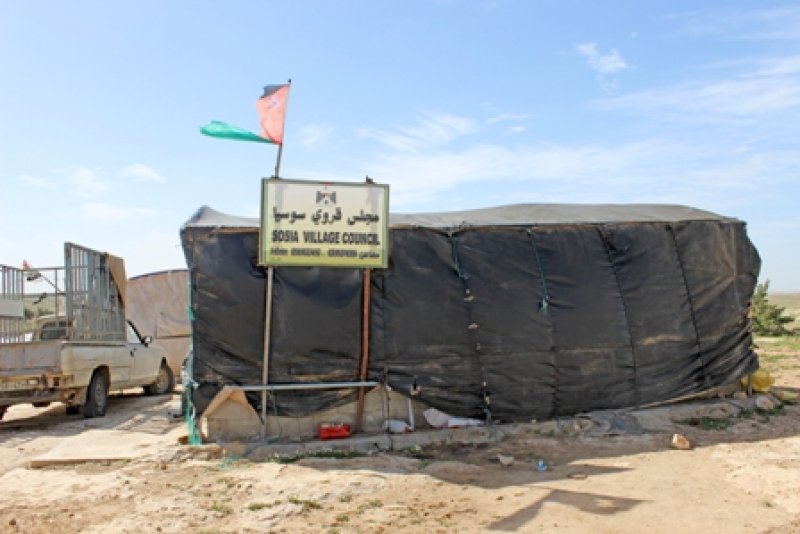 Summary of interview with Nasser Nawaja’a, a resident of Susya - by Halimah Al Ubeidiya and Wassim Ghantous

In the past year, BADIL has conducted more than 60 interviews with Palestinian victims of Israeli forcible displacement. These interviews were an essential part of the handbookpublished earlier this year, and for which we dedicate this issue of al-Majdal. In this section of the magazine, we bring you summaries of two compelling stories of displacement and resistance. We hope these interviews shed light on the human dimensions of forced population transfer, an issue more often described in dry and distanced legal language.

Today, the village of Susya, located in the South Hebron Hills, is composed 45 families or 339 residents, 60 percent of whom are children. Normally, the number of residents increases over the years, but unfortunately, in the case of Susya the numbers are decreasing. The decreasing population comes as a result of losing lands. This land robbery is undertaken by Israeli claims that the land is a ‘state land’, an ‘archeological site’, or needed for ‘security’ reasons. Consequently, the daily problems of this once pastoral village include the lack of basic infrastructure, violence from colonizers (culminating in the murder of three residents of the village), prevention of access to lands (read: prevention to means of livelihood), and demolition of houses.

The saga of displacement in Susya has been going on for three decades. In 1983 the Jewish-Israeli colony of Susya was established on their village lands, after they were declared Israeli ‘state lands’. In 1986 the Palestinian inhabitants of Susya were expelled by force by the Israeli military. The Israeli Civil Administration declared the site a ‘national park’, claiming the existence of an ancient synagogue in the village. The declaration of this archaeological site did not prevent Israelis from colonizing it, putting into question the authenticity of their claim. The Palestinians who were expelled settled on their agricultural lands where they live until this day. However, they face the threat of an imminent expulsion.

Since the 1990s, the residents of Susya have been subject to repeated risk of displacement and house demolition. Due to the Israeli refusal to grant them building permits, they are forced to live in plastic and cloth tents. Not even their makeshift residence is immune to Israeli demolition. Since the early 1990s they have been facing demolition orders for the tents. In 2001, following the assassination of an Israeli-colonizer in the area, the residents of Susya were expelled from their lands for the second time and their properties destroyed by the Israeli military. They appealed to the Israeli High Court, which issued an interim order permitting them to return to their lands. However, the court prohibited the establishment of any new buildings in the village. In order to prevent the demolition orders in 2004 the residents of Susya applied for building permits for the existing buildings in the village. All the applications were denied by the Israeli Civil Administration (ICA) – a misleading name to what actually is the Israeli Military Administration in the Palestinian Territory occupied in 1967.

In 2011, the Israeli authorities demolished 14 structures in the village, including 10 residential tents, and handed demolition orders to additional structures including the school and water wells. This led to the displacement of a number of residents who moved to live in the nearby town of Yatta. One year later, an Israeli right-wing organization called Regavim, petitioned the High Court demanding that the ICA carry out the demolition orders issued for the buildings in the village, claiming that the Palestinian village of Susya is illegal. A few months later, the Israeli authorities issued demolition orders for 58 facilities, including Susya’s elementary school and health clinic. The notifications stated that they were renewals of demolition orders originally issued in the 1990s. The residents of Susya were given three days to appeal the orders through the Supreme Planning Council of the ICA. Through those means they objected to the demolition orders and submitted a detailed master plan for the village with the assistance of the Palestinian Authority and Bimkom organization – hoping to obtain official recognition of Susya as a residential village. Recently, the High Court gave the ICA 90 days to discuss Susya’s master plan, submitted on September 2012, but it has not yet been approved or rejected. Additionally,the judge granted a 90-day extension to allow the state to prepare a master plan for the southern section (Wadi Jhash) of the village.

The residents of Susya originally owned around 10,000 dunums. In the 1980s they lost the first 1,000 dunums to the construction of the colony of “Susya”, which originated from an Israeli military camp that developed to an outpost, and eventually became a full-fledged, ever-expanding, colony. By 2000 the Palestinians of Susya had lost around 80 percent of their lands, and after the Second Intifada and the displacement that followed they discovered that they were allowed to use only 30 percent of their lands. Often, the ICA-issued military orders state that it is forbidden for both, Palestinians and Israeli colonizers, to enter these lands for security reasons. However, the fact of the matter is that it is forbidden for the Palestinians to access their lands while the colonizers can enter, work the land, and establish an outpost. The colonizers, moreover, utilize Israeli-manipulated laws that grant ownership to lands to those who work them, thus taking over lands that are inaccessible to Palestinians. Israel applies Ottoman laws according to which if a person does not use his lands for a certain number of years, it becomes state land.

For obtaining a house building permit a Palestinian needs to show documents that prove his ownership of the land. However, since all the lands of Susya are located in area C, the villagers have to ask the ICA for the documents. This means that a Palestinian has to pay around 150 NIS ($40) for each document - an expensive fee for most of the famers in this area.

The cruel irony of Israeli policy with the Palestinians of Susya is best put by Nasser Nawaja’a:

“The building permit applications are based on the British Mandate law RJ/5 according to which it allows building of 150 square meters, plus 30 square meters for a structure to shelter the sheep. We fulfilled and presented all requests, but our applications were declined for arbitrary reasons. For instance, they stated that the sheep shed is too close to the residence and this is not healthy at all, therefore they refused many of our applications. They are concerned for our health, but the fact that we live without any water is not a big matter for them. They use arbitrary excuses to prevent us from getting the building permits. We applied more than once, but they always rejected our applications, so we stopped trying.”

On the current forms of resistance, Nasser Nawaja’a explains:

“The first period of displacement and the struggle against it was really hard. We were alone and it was expensive to pay for the master plans. Also we weren’t aware about the ways the occupation and settlers would steal our land and demolish our homes. Today we have a court case in the High Court and we are struggling in various ways with the assistance of expert organizations and popular struggle. We organize demonstrations on the ground, send Israeli officials petitions demanding a halt to our displacement, using social media campaigns, and so forth - hoping that the court won't approve our displacement, although we know that, for us Palestinians, the Israeli High Court of Justice is a court of injustice.”

More in this category: « Witnesses to Displacement Beit Safafa: a dissection of a village, the destruction of life Practicing Truth to Power: A report about BADIL’s latest work to combat Forced Population Transfer »
back to top