Lifta and Battir: Parallel Cases of Ongoing Nakba in the Jerusalem District 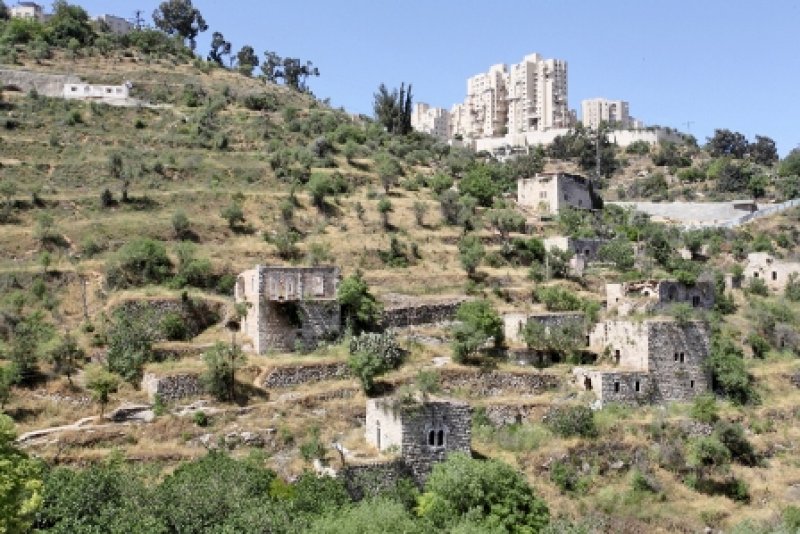 Many of Lifta’s houses remain structurally intact today although in desperate need of rehabilitation. May 2013 (© RW/BADIL)

"Everyday we live through there is a new massacre, there is steadfastness and there are people displaced from their lands. The Nakba and everything that Israel puts on us is an ongoing process..."

These words, echoed so eloquently by Amal Obeidi, a young Palestinian refugee with a clear political mindset, were spoken on March 30th - 'Land Day' 2013, and are the opening lines in the film 'Sons of Lifta' - produced by BADIL's Ongoing Nakba Education Center (www.ongoingnakba.org). Amal's grandfather, lived happily in Lifta until the entire population of about 3,000 people were forcibly displaced in 1948 during the early years of Nakba. In common with many other self-sufficient agricultural villages in the Jerusalem district, Lifta was bisected by the 'Green Line'. All houses in the western side of the village now stand empty, their stunning traditional archways still intact in many cases, but the smells of taboun bread no longer emanate from houses and the spring no longer waters the community's vegetables or splashes under the weight of frolicking 'Liftawi' children.

“by watching these two short films together, two very different stories of neighboring villages emerge, yet both paint very clear pictures of the colonial Zionist enterprise and some of the different tools it uses to perpetuate the ongoing Nakba.”

A few kilometres from Lifta, another of Jerusalem's villages, Battir, was also bisected by the 'Green Line' . Today, Battir's villagers still live from the produce of its rich soil although cannot access all of their lands. Within coming months and more than 65 years after the Nakba and the colonization of their village began, the villagers expect about 3,000 dunums of their agricultural land to be appropriated. Battir is the setting for 'Villagers on the Line' - another very popular film produced by BADIL's Ongoing Nakba Education Center, and by watching these two short films together, two very different stories of neighboring villages emerge, yet both paint very clear pictures of the colonial Zionist enterprise and some of the different tools it uses to perpetuate the ongoing Nakba.

Battir was similarly attacked by Zionist militia in 1948, as Fatima Muammar recalls in 'Villagers on the Line':

"My husband was not here in the village [at that time]. I was ploughing with the donkey, me and my children who were still very small. The Jewish [militias] started to shoot from that side... People started to run away from the village. I had five...children with me so how could I run away? Where could we go?"

Unable to escape, Fatima remained in Battir as did a small number of other villagers. The militias faced some resistance from across the valley in Beit Jala's hills and never proceeded into the main parts of the village. When the 'Green Line' was drawn up it bisected the village, but the presence of the Hijaz railway line, seen as an essential tool by the Zionist project, assisted residents in negotiations with the Zionist leadership. Nakba survivor, Mohammad Abu Hassan, explains that the agreement conditioning residents’ remainder on their land included:

"...permission for Battir's villagers to use their lands three kilometers beyond the train line and we, the residents of Battir, must ensure the train's safe journey through Battir"

This agreement, drawn up between the Jordanian and Zionist leadership, was unique in Palestine. More than just 'allowing' Battir's residents to access three kilometers of their lands past the Green Line, the 'Rhodes Agreement' guaranteed that the villagers actually retained ownership of those lands although they were now within the imposed boundaries of the Zionist state.

The story of Lifta's villagers was quite different. Following repeated and heavy attacks on their village, they were entirely forcibly displaced. Some fled to Jordan along with hundreds of thousands of other Palestinians where many remain today, whilst others ended up in Europe and the US. A few Liftawi remained west of the 'Green Line' in what became the West Bank, and today a very active group of refugees still live in Jerusalem, particularly around the areas of the French Hill and Sheihk Jarrah. It is these refugees who feature within the 'Sons of Lifta' film. As holders of Jerusalem ID cards they are able to 'visit' their homes, although have been denied their right of return as have all displaced Palestinians. Amongst these refugees, some live as close as 500 meters from their original houses. Under Israeli laws which were created to 'legalize' the apartheid system, in particular Absentee Law, they have been labeled 'absentees'. This amounts to a complete denial of the knowledge of their presence in order to authorize the confiscation of their lands.  For the Liftawi, in common with millions of other displaced Palestinians, they have lived in enforced exile for more than six long decades, yet also in common with all Palestinians they have never given up their struggle for rights. The ongoing Nakba and Israel's Apartheid system controls the lives of this steadfast exiled community through its continued denial of their return to their houses as residents, rather than as 'visitors'.

In Battir, the Hijaz railway line still passes through the village as it has done since its creation at the end of the 19th century, yet it no longer stops in the village, transports villagers and their vegetables to Jerusalem's markets, or even allows villagers to use the train. The train’s passengers are today settlers and tourists rather than indigenous traders and farmers. As West Bank ID holders, without applying for the inevitably impossible to obtain permits, they cannot even enter the city of Jerusalem which had been the market for their fresh produce. Standing in Battir today, watching farmers tending the famous Beitnjan Battiri (Battir aubergine), it is not hard to imagine how Lifta would have looked had the Zionist enterprise not taken shape, yet the latest plans of this project will push even these contemporary realities into memory. The Apartheid Wall is already snaking through the neighboring lands of Beit Jala, Cremisan and al-Walaja, and over the coming months its oppressive tentacles will reach out through Battir to confiscate another 3,000 dunums of agricultural lands. Its path will hide the historic train line from the village, but more significantly it will devastate the way of life on which Battir has sustained itself proudly for thousands of years. Some farmers will lose all of their lands behind the Apartheid Wall and thus, their only means of survival.

The story of the ongoing Nakba in these two Jerusalem villages has been enforced quite differently yet it highlights several constant threads. Standing at the bottom of the valley in Battir today, essentially on the 'Green Line', olive trees to the west are, according to colonial impositions, in 'Israel' whilst to the east they are in 'Palestine' despite belonging to the same families. Such demarcations visually highlight the immorality and sheer ridiculousness of the historic division of Palestine. Similarly, for the Liftawi elders who live within eyesight of their original houses and who regularly take their children, grandchildren and now great-grandchildren to 'visit' and clean the village graves of their ancestors, there is no moral, legal or ethical justification for this division. This division dictates that their lands are in 'Israel' yet they are refugees and 'Jerusalem ID holders' whilst many of their brethren are either refugees with 'West Bank IDs', refugees with Jordanian ID's or refugees holding other foreign passports. Such people are not only members of the same community; they are family members, brothers, sisters, uncles and cousins. Zionism shapes this continued immoral dispossession. The ongoing Nakba being played out in neighboring Battir dictates that farmers who travel a few meters to pick their olives are entering 'a different countr’, but after construction of the Apartheid Wall, will lose access to their land altogether.

The stories of these two neighboring villages, or of Palestine in its entirety, cannot be understood through the prism of 'occupation' alone, as a broader toolbox used to promote the enterprise of Zionism shapes Palestinians’ reality. This supremacist ideology was at one time recognized by the United Nations as a form of racism before Zionism achieved leverage within US foreign policy with the support of Europe (see Zionist apartheid  on page 5). Colonialism was brought to its knees in much of the world, and only when a thorough de-colonization project is implemented across all areas of Palestine will these patterns of dispossession, exile and apartheid finally become another blot on the history of mankind.

BADIL's Ongoing Nakba Education Center produces multi-media advocacy tools to support the struggle against Palestine's ongoing Nakba. Materials are available for international exposure through film screenings and photography exhibitions. Please see - www.ongoingnakba.org - and for more information please contact: This email address is being protected from spambots. You need JavaScript enabled to view it.

More in this category: « Zionist Apartheid: a Crime Against Humanity Implementing States’ Obligations to Combat Population Transfer* »
back to top