The BADIL-Zochrot Study Visit to Cape Town: An Introduction 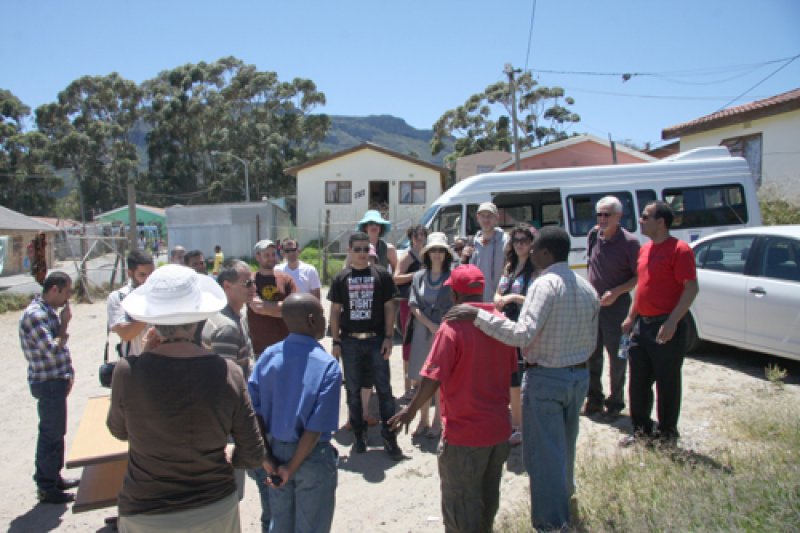 The return of displaced Palestinians to the lands from which they have been displaced and denied return for over six decades is the central issue around which the Palestinian struggle for freedom and self-determination revolves. Among those who value justice and respect for international law, there is no disagreement that refugee and IDP reparation ( return, Restitution, rehabilitation, compensation and non-repetition) is central to a just and lasting solution to the woes of the region. For both Badil and Zochrot, it is this aspect of the liberation of Palestine to which we have dedicated our efforts for over a decade since our organizations’ establishment. Through the course of our work, however, we have found that conceptions of “return” have remained somewhat superficial. This is true among the settler community that sees it as a calamity to be avoided at any cost as well as among the indigenous community that equates return to a reversal of six decades of settler-colonialism; the return to a paradise lost.

We have found ample value in exercises that connect Palestinians and Jewish-Israelis and challenge them to envision the return, its practicalities, its obstacles, and the ways of overcoming them. Such exercises, we have found, are a step towards making return a concrete reality. How, for instance, is return to materialize to a village whose inhabitants numbered less than two thousand before the Nakba, and who now number in the tens of thousands? Are the descendants of large landowners to return to bountiful properties, while the many more descendants of workers, sharecroppers and tenant farmers to return to no property at all? Is what remains of Palestine’s terraced hillsides to be turned into concrete jungles of parceled out houses over which present and future heirs can differ? What will be the fate of a productive factory that lies on the land of Palestinian returnees? These are just a sample of the questions that a materializing return will have to answer.

The case of Palestine, however, is not the only one in which mass forced displacement has been carried out, nor will it be the only one in which return will constitute part of a just solution. Indeed, there is much for us to learn from cases of expulsion and return stretching from East Timor, the former Yugoslavia and Cyprus, to Rwanda, Zimbabwe and South Africa. The idea is not to replicate models but rather to try and learn their lessons and incorporate them into our thinking of Palestinian return. A particularly rich source of such lessons, as it turns out, is post-Apartheid South Africa.

The Western Cape and its enchanting cosmopolitan capital, Cape Town, have the highest rate of inequality of any place on our planet. Along with the rest of South Africa, Dutch and, later, British military occupation and colonization brutalized the indigenous population. By 1913, the colonial power successfully legislated the concentration of the indigenous majority on less than fourteen percent of the territory of South Africa. The morsels of land reserved for the natives were comprised of non-contiguous rural territories that the Apartheid regime would later claim constituted independent states known as the Homelands or Bantustans. Black-owned farms outside these territories would later be designated as “black spots,” their owners stripped of their title and carted off to the Bantustans. These Bantustans acted as containers of sixteen million cheap Black laborers for white owned mines and factories. If the white capitalists needed such workers they could get them, if they didn’t, the workers could just rot in their territories where they would be policed by their own kind. In urban spaces, the “Group Areas Act” confined each non-white “race” to its own area. The areas that were mixed before the “Group Areas Act,” such as Cape Town’s District 6, had to be racially purified. The way the Apartheid regime achieved such racial purity is one all too familiar in Palestine. In South Africa, this kind of violence was better known by the horrifying description: “forced removal.” By 1994, at least 2.5 to 3.5 million South Africans had been subject to forced displacement.

It was the possibility to learn from some of the successes and failures of this process that drove activists from Badil and Zochrot to visit Cape Town from the second to the tenth of February, 2012. After several days of valuable visits, tours and presentations ( a sense of which is provided in the acknowledgments below), our group spent two days divided into three working groups; each devoted to one of three topic areas: working towards return; reparations; and visions for a new state. Preliminary outcomes from the discussions were presented to the whole group, and the larger group’s feedback formed a foundation for further discussions within the working groups. Rapporteurs from each group then drafted the discussion papers, shared them with the broader group for a final round of feedback, bringing them to the state in which they have been published here.

The section on "Working towards Return" provides an overview of the various aspects of the work needed in preparation of the return of Palestinian refugees. These include knowledge building, network and coalition building among refugee communities, facilitating grassroots initiatives, and so on. The group that produced the “Reparations” section started its discussion with a focus on restitution. The experiences in South Africa suggested that a broader and more flexible focus was needed for dealing with land, housing and property for both those on the land and those returning to it. The discussion thus focused on different ways in which rights to return and restitution could be balanced with rights to housing, economic development needs, and the respect for the environment and the landscape. The section "visions for a new state" attempts to propose mechanisms, processes and ideas for the post-colonial and transitional stage in Palestine, covering various aspects such as reconciliation, justice and trauma healing; de-Zionizing the realm of culture, memory and education; and an outline for a future polity in Palestine.

The discussions were not simulations of negotiations processes between Palestinians and Israelis. All of us involved are firmly committed to the liberation of Palestine and the return of Palestinian refugees, even if these may mean somewhat different things to each of the participants. As such, most of the discussions took the end of Zionist apartheid, occupation and colonization as a starting point while focusing our energies on the exercise of envisioning a post-Zionist Palestine with the lessons from Cape Town as backdrop. To some readers, these discussions may seem too lofty. Indeed, as one participant aptly asked as we started our discussions “how am I to imagine a post-liberation future when I am still under occupation?” Added to this challenge was that of thinking about possibilities in a rapidly and continuously changing present. The Israeli regime’s strategy of creating and changing facts on the ground, blocking off Palestinian chances of restoring what once was, means that what may be workable one day becomes impossible on the next. As such, participants faced the challenge of trying to maintain a principled flexibility, with the knowledge that the site of a depopulated Palestinian village or urban neighborhood may not look the same next year or even next week.

We hope that whoever reads this will not treat it as a manual of return proposed by Badil and Zochrot, but rather as what it is: an attempt to begin to discuss and answer questions about return by a particular group of people at a particular time after engaging in a very particular experience. At least as important as the suggestions involved in the vision set out in the three documents that follow are the questions that underpin them. If others take these questions and pose them to themselves and people in their surroundings, we will have achieved our preliminary goal of transforming the thinking about return from pure abstraction to something more concrete, in the hope that our struggle will contribute to it someday becoming a lived reality.

We take this opportunity to thank all of the people who made our experience in Cape Town a rich one: Anthony and the other migrant and local activists of Imizami Yethu; Mbongeni, Mcedisi Twaloand the Anti-Eviction Campaign activists in Gugulethu as well as Theodora “Noma” China who shared her home and her story with us; Professor Ben Cousins and the Institute for Poverty, Land and Agrarian Studies at the University of the Western Cape; Judge Siraj and Faiza Desai; Braam Hanekom of PASSOP Afrika; Father Michael Lapsley of the Institute for Healing and Memory; Dr. Anwar Nagia, Archbishop Desmond Tutu; Bonita Bennett, Mandy Sanger and the rest of the staff at the District 6 Museum; Xhoxho who let us into the house in District 6 to which she returned; Michael and Craig from Doxa Productions; and George Mukundi Wachira, Delphine Serumaga and Hugo van der Merwe from the Center for the Study of Violence and Reconciliation.

Special thanks go to Mercia Andrews, Fr. Edwin Arrison, Heidi Grunebaum, Aslam Levy, Carol Martin, Lutfi Omar, Firdouza Waggie and the other comrades of the Cape Town Palestine Solidarity Campaign. Not only did they organize our trip, they made sure that it was a spectacular one, imbuing it with a magic that none of us could ever forget. Major gratitude is also due to HEKS-EPER who funded a project that, despite its importance, most, if not all, other funders would shy away from. Last, but far from least, a thank you to “Mama” Latisha and the rest of the staff who put up with us at the St. Pauls Church guest house.

More in this category: « Zionism: A Root Cause for Ongoing Population Transfer of Palestinians Working Towards Return »
back to top