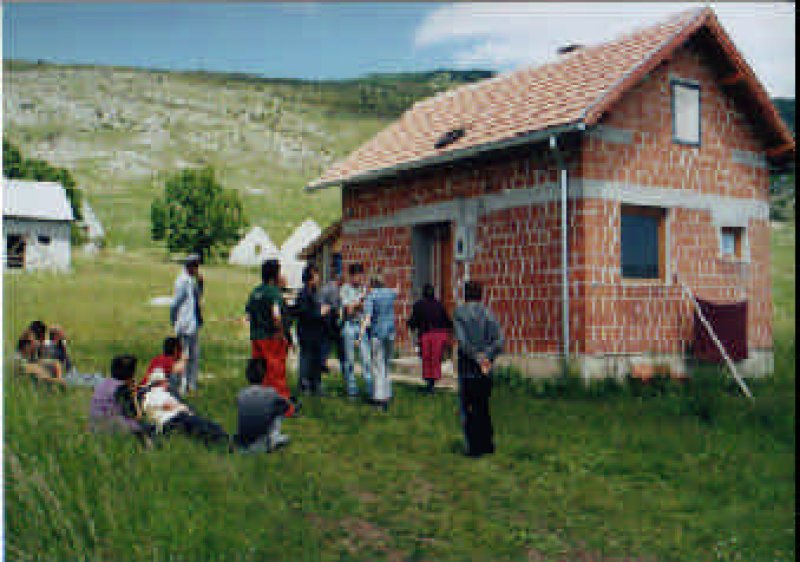 As of 31 August only 48.4 percent of UNRWA's 2002 Emergency Appeal had been pledged with only 56.6 percent of this amount actually received. The amount received therefore is only 27.4 percent of total requirements of the emergency program. Without the requested funds UNRWA will be forced to cut back on food and other emergency aid for Palestinian refugees in Gaza and the West Bank despite recent studies showing growing malnutrition among children (See, Refugee Protection)

Emergency Programs in the 1967 Occupied Territories

Employment Assistance
By the end of 2002, UNRWA will have disbursed US$ 6.7 million in salaries to staff members given temporary employment with the
Agency. In the Gaza Strip UNRWA has employed 21,156 refugees, including 3,821 females. Overall 178,509 persons (wage earners plus dependants) have now benefited from the program since it was established in January 2001. As noted above (See Refugee Protection), however, the emergency programs are unable to cope with the extent of the unemployment problem in the occupied territories.

Food Assistance
UNRWA continues to provide emergency food assistance to nearly 1 million refugees in the occupied territories. During July UNRWA distributed 19,188 parcels to 6,628 families residing in six refugee camps, two villages and one town in the West Bank and 68,564 parcels to 25,158 families in nine refugee camps, 57 villages and five towns. In the Gaza Strip, a total of 126,682 refugee families received rations during the final round of distributions from the third emergency appeal in July. The first round of distribution under the 2002 Emergency Appeal began on 6 August, with 89,651 parcels issued by the end of the month. Since December 2000, 1,328,950 food parcels have been distributed to 128,536 families in the Gaza Strip, the majority of whom are refugees.


Agency emergency programs continue to provide for small cash. While many refugee households are reporting that they have run out of savings, Agency programs are only able to provide for those refugees, and a small number of non-refugee families, most in need. In July, UNRWA extended US$ 284,554 in cash assistance to 1,723 families in the West Bank, 977 of them residing in refugee camps, 239 in villages and 507 in towns.

The ongoing massive destruction and damage inflicted by Israeli military operations on Palestinian refugee camps and catchment areas continue to place a heavy burden on UNRWA resources. Even without the ongoing damage, the Agency is unable to repair all those shelters that are in need of emergency rehabilitation. The Israeli military is destroying and damaging shelters faster than the Agency can rebuild and repair them, particularly in the context of severe closures and curfews. In July, the Agency assisted  900 families with US$ 256,473 in cash to enable them to carry out repairs to their homes that had been damaged in fighting. The families reside in nine refugee camps and in Hebron, Bethlehem, Ramallah and Qalqilia. In August, the Agency extended the same assistance to another 987 families residing in nine refugee camps and six towns and villages.

The first 64 housing units in the Tel es-Sultan quarter of Rafah were completed in late July. These will house 396 persons whose homes have been destroyed or rendered uninhabitable by Israeli military action. The second phase, under which an additional 33 units will be built, is also nearing completion. Israeli restrictions on the entry of pipes have continued to delay work. As for the third phase (construction of 141 shelters), UNRWA has been unable to begin work because the Palestinian Ministry of Public Works and Housing has not yet made the land available.

Tenders are currently being evaluated for the construction of 18 dwelling units in Deir al-Balah, and another 156 shelters in Khan Younis are under design. Tenders are being accepted for repair work on 26 sheltersdamaged in the Daraj quarter of Gaza City following the Israeli air attack on Hamas leader Salah Shehada in late July. The project to repair shelters damaged when the Israeli military blew up a tunnel under the Egyptian border earlier this year is continuing. Eightytwo shelters have been repaired; 23 others are to be rebuilt and design work is continuing.

Health Assistance
The reoccupation of the seven largest towns in the West Bank, prolonged curfews and the strict regime of closure severely hampered UNRWA's health services in July and August. Restrictions on movement prevented staff members and the sick alike from reaching health facilities. There were 1,875 absences among staff members in July and 971 in August. The slight improvement in attendance resulted primarily because several staff members were issued permits to enter Jerusalem. Curfew and restrictions on movement frequently prevent patients from reaching the hospitals in the West Bank where UNRWA contracts services on their behalf.

For this reason, UNRWA approached additional hospitals in Jenin, Ramallah and Nablus to provide medical and surgical services, and in one location, cardiac care as well. UNRWA will soon award contracts to Al-Razi Hospital in Jenin, the Red Crescent Hospital in Ramallah and the Nablus Specialist Hospital in this regard. Damage to infrastructure and prolonged confinement indoors under curfew is also leading to health problems for refugees. In July, there was an outbreak of diarrhoea among refugees in theBalata camp. UNRWA doctors treated a total of 604 patients with symptoms including vomiting, abdominal cramps and fever.

Laboratory tests revealed Shigellosis. Initially, it was thought that water had been contaminated with sewage, the result of damage by tanks and armoured personnel carriers to sewage and water lines outside the camp. The real cause, however, may have been deteriorating standards of hygiene due to prolonged confinement indoors. Along with women and children, elderly refugees are also showing signs of vulnerability to Israel's ongoing military siege. In August, medical professionals from UNRWA called on elderly residents and individuals suffering from diabetes and hypertension in their homes in villages near Jerusalem.

The residents were unable to reach Agency facilities. UNRWA staff discovered that several patients showed high levels of uncontrolled  sugar and high blood pressure, clear signs of the effects on the general health of the population when the sick are unable to reach health care providers. The psychological support project, which began in May 2002, continued throughout the summer months. Sixty-seven counselors, an UNRWAproject co-ordinator and a four-person  anagement team have been attached to the Education, Relief and Social Services and Health program departments. The specialists carried out group counseling sessions dealing with fear, aggressive behavior, nocturnal enuresis, hyperactivity, family violence, anxiety and sleep disorder; individual sessions for  ersons suffering from severe depression, trauma, grief and stress; and home visits to bereaved families and others whose houses had been demolished or who were in severe poverty.


UNRWA teachers and students returned to the classroom in late August. In the first seven working days, there were 2,691 absences among teachers, the majority (1,702) among teachers assigned to schools in and around Nablus. All but one school, a boys' school in Hebron which the IDF ordered closed, opened on the first day of the new school year. There were a total of 326 supplementary staff members, including 57 teachers, in positions with the Agency's education programme in the West Bank as the school year began. UNRWA continued to provide counselling to West Bank students who have been traumatised by the violence of the 23 months. In July, 33 counsellors met with students in 720 groups and 184 individual sessions. They met with the families of 33 students. In August, they conducted 436 group-counselling sessions and met with students in 109 individual sessions.

Since the Israeli military assault on the West Bank in late June, UNRWA's work has been hampered even more, simply because so many of its employees have again been confined to their homes. In July, for example, 1,453 employees (out of 3,545 regular staff members), residents of 20 cities, villages and refugee camps were under curfew from two to 31 days. At a time when Palestinians are most in need of UNRWA's assistance, the Agency's ability to deliver services has been compromised. The Israeli authorities continued to deny UNRWA distribution teams access to the al-Mawasi area in the Gaza Strip due to its proximity to Jewish settlements. No food has been distributed inside these areas since March and April 2002 respectively.

Work on rehousing Rafah's homeless refugees was subject to long delays because of both the restrictions on movement imposed by the Israeli military within Gaza and the difficulty of importing building materials to the Strip. The Abu Houli-Gush Qatif checkpoint, which controls access to southern Gaza, was either fully or partially closed for 200 days during a 300- day period.

The Karni commercial crossing-point into Gaza has been closed completely for weeks on end, while at other times there has been a ban on importing sewage and water pipes. During the annual donor's meeting in Amman, Jordan, UNRWA was asked by its major donors to detail the funds that are being diverted from its humanitarian aid work because of the Israeli security regime in Gaza and the West Bank. During the meeting, the Agency informed donors that it had paid over US$ 2.5 million - of what should be a purely humanitarian budget - in additional port and storage charges because of the security regime imposed by the Israeli authorities.

Charges imposed by Israel for search procedures come on top of heavy losses caused by the movement restrictions that have stopped staff from reaching their places of work since the start of the intifada in September 2000. The Agency has also been forced to spend hundreds of thousands more on repairs to its buildings that have been damaged during military operations. UNRWA recently submitted a claim for US$ 535,000 in compensation to the Israeli government just to cover the cost of  building damage. UNRWA informed donors that it lost 72,000 teacher-work days during the 2001- 2002 academic year because of movement restrictions imposed on its staff. Additionally, in the first eight months of this year, the Agency lost 11,000 staff work days at its health clinics.

UNRWA has tried to redeploy staff so that they work close to their homes and avoid chek points and yet its 34 health clinics in the West Bank cumulatively lost 340 treatment days between January and August 2002. In the Gaza Strip during July and August, 21 tents, 123 blankets, 123 mattresses, 46 mats and 26 kitchen kits were issued to refugee and nonrefugee families whose houses were demolished during the month under review. Since the beginning of the intifada, UNRWA has distributed 416 tents, 79,487 blankets, 2,838 mattresses4, 806 mats and 439 kitchen kits to families in the Gaza Strip.

More in this category: « Campaign for the Defense of Palestinian Refugee Rights Refugee Voices »
back to top