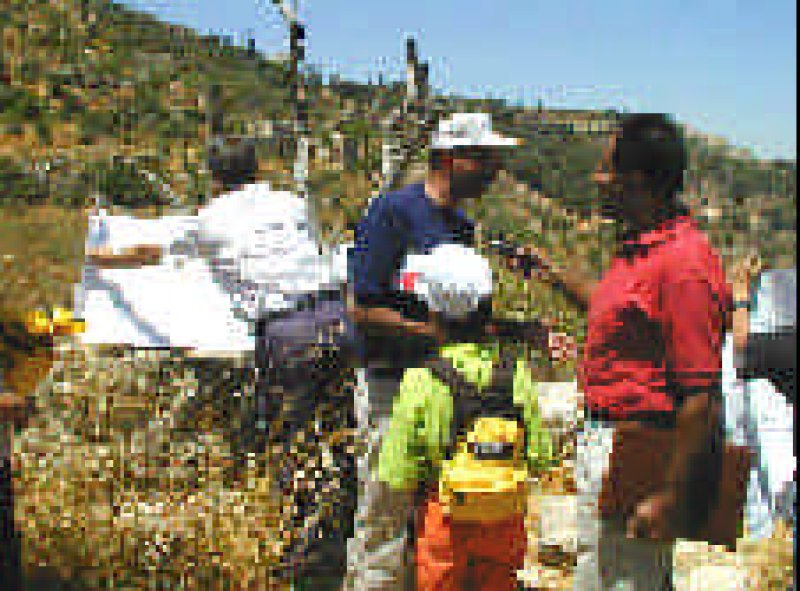 The report provides a series of recommendations to ensure Israel's compliance with UN resolutions and international law, including, the deployment of international monitors, the disengagement of Israeli occupying forces under international supervision, stabalization of the autonomous Palestinian government, insistence that a final and comprehensive agreement cannot derogate from principles held to be non-negotiable in all other instances, including the right of refugees and displaced to return to their homes, the use of international sanctions for noncompliance, and the establishment of accountability at the international level for unacceptable practices.

to work to earn it. They increasingly must rely on handouts, sale of personal items, credit, etc.. Widespread damage, injuries and deaths in the refugee community have reduced even further what little material capital and savings refugees have to rely on during periods of economic instability and political crisis.

Secretary General Report on Jenin: In July the UN Secretary General released his report mandated under UN General Assembly Resolution ES-10/10, 7 May 2002, on the events in Jenin refugee camp and throughout the West Bank during Israel's massive military assault in April. The General Assembly requested the Secretary General to prepare the report following Israeli non-compliance with and collapse of a Security Council sponsored investigation earlier in the year. The Secretary General's report was heavily criticized by local and international human rights organizations. Human Rights Watch called the UN Jenin report 'flawed.'

"The report doesn't move us forward in terms of establishing the truth," said Hanny Megally, executive director of the Middle East and North Africa Division of Human Rights Watch. While the report describes some general allegations that have been made about the conduct of the Israeli and Palestinian sides during the Israeli operation, it draws almost no conclusions on the merits of those claims. It makes only limited reference to the obligations of the parties under international law, makes few clear conclusions about violations of that law, and does not raise the issue of accountability for serious violations that may have been committed, some of which rise to the level of war crimes.

"Even with what they had, they could have done more," Megally said. Examples of the report's failings include the following: It refers to the fact that civilians died in the operation, without examining the circumstances of their deaths. The U.N. report mentions that missiles were "at times" fired from helicopters, minimizing evidence suggesting that their use was intense and indiscriminate in Jenin camp, particularly on April 6 when missiles caught many sleeping civilians. It does not discuss what, if any, steps the parties have taken to investigate credible allegations of violations of international humanitarian law raised in the report - such investigations are vital for ensuring accountability and discouraging future violations. (Human Rights Watch, 2 August 2002) UNCCP

56th Annual Report: On the eve of the second anniversary of the Palestinian uprising the UN Conciliation Commission for Palestine (UNCCP), the UN body established under UN General Assembly Resolution 194 and mandated to provide international protection for Palestinian refugees released its 56th Annual Report. The reportcovers the period from 1 September 2001 to 31 August 2002. In the interests of advancing discussion on resolving the protection gap for Palestinian refugees the FULL UNCCP report is reprinted below .FULL TEXT of the Fifty-sixth REPORT of the United Nations Conciliation Commission for Palestine (UNCCP) "In paragraph 2 of its resolution 56/52 of 10 December 2001, the General Assembly requested the Commission to report to the Assembly as appropriate, but no later than 1 September 2002. The Commission notes its report of 31 August 2002 (A/56/290) and observes that it has nothing new to report since its submission."

UNHCR and Refugee Protection (BADIL Brief No. 7): Between 1948 and 1949 the United Nations General Assembly accorded mandates to two separate UN agencies to provide international protection (including durable solutions) and assistance to Palestinian refugees. This unique regime is comprised of the UN Conciliation Commission for Palestine (UNCCP), and the UN Relief and Works Agency for Palestine Refugees (UNRWA). Palestinian refugees also have a unique and complex relationship to a third UN agency - the Office of the UN High Commissioner for Refugees (UNHCR). Over the past two years, BADIL has examined the pros and cons of UNHCR stepping in to fill the protection gap for Palestinian refugees. The initial findings are presented in BADIL Information and Discussion Brief No. 7 published in August. The following article provides a short summary of the Brief.

Generally, UNHCR has a mandate to provide international protection and search for durable solutions for refugees world-wide, including persons defined as 'Convention refugees' under the 1951 Convention Relating to the Status of Refugees (Refugee Convention). According to special provisions set forth in Article 1D of the 1951 Refugee Convention, Palestinian refugees are entitled to the benefits of the Convention (i.e., considered as 'Convention Refugees') when protection or assistance from other organs or agencies of the United Nations has ceased forany reason, without the position of the refugees being definitively settled in accordance with relevant resolutions of the UN General Assembly.

UNHCR does not have an explicit mandate to provide international protection and seek durable solutions for all Palestinian refugees. The technical aspects of triggering UNHCR intervention, if and when necessary, are least problematic. While Paragraph 7C of the UNHCR Statute does not contain an inclusion clausesimilar to  Article 1D of the 1951 Refugee Convention, both the UN General Assembly and ECOSOC could issue policy directives to the HighCommissioner, as they have done in other cases, that would bring Palestinian refugees within the scope of the UNHCR Statute. More problematic are issues related to inter-agency jurisdiction (i.e., UNRWA) and clarification of the constraints imposed by UN Resolution 194(III) (i.e., criteria for the cessation of refugee status and restrictions on resettlement) on an expanded UNHCR
mandate.

The same value-added formula should be applied in relation to the search and implementation of durable solutions. Finally, careful consideration must be given to the political environment in which UNHCR operates. While the issue of mandate and operational experience are technical issues that can be addressed in a relatively straightforward manner, the clearest and most accurate interpretation of mandate and division of roles can go awry due to untoward political influence. What are the potential implications of UNHCR intervention in light of the fact that the UNHCR's largest state donor, the United States, remains opposed to the implementation of those rightsaffirmed in UN  esolution 194(III)? Can UNHCR intervention be effective, moreover, in the absence of sufficient support from Arab states? Would UNHCR intervention engender political pressure to dismantle UNRWA? The absence of a resolution to any one of these issues could have negative consequences for Palestinian refugees if the UNHCR were to  afford systematic protection to them.

Recommendations include:
(1) UNHCR, UNRWA and other UN agencies should establish a coordination mechanism or secretariat for the exchange of documents, information, data and reports regarding their respective policies and operations. Such a mechanism would assist in the identification of  specific gaps (short-term and durable solutions) in the international protection regime forPalestinian refugees. Palestinian institutions - official and civil society - should engage UNHCR and other UN agencies in a meaningful discussion regarding Resolution 194(III) in order to clarify the specific framework for durable solutions applicable to the Palestinian case and the status of Palestinian refugees under the 1951 Refugee
Convention.
(2) UNHCR, UNRWA and Arab host states should establish a mechanism for discussion and debate about the pros and cons of expanding UNHCR's mandate in the Palestinian refugee case with the aim of finding comprehensive solutions to the gap in international protection.

More in this category: « Durable Solutions Refugee Protection »
back to top