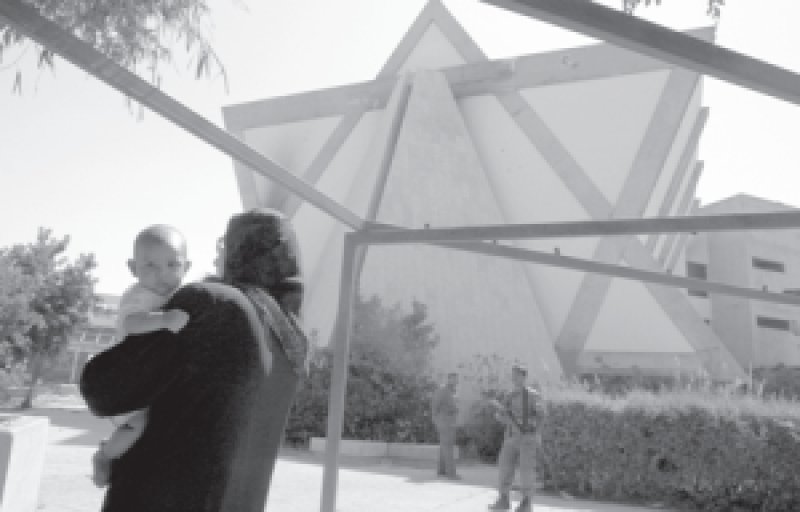 It is as if post-Lebanon war Israel, government and society, had undergone another form of convergence: a process of unilateral mental withdrawal from the conflict with the Palestinian people.

The question of what comes after the “convergence plan” hardly enters into Israel’s public debate. Israeli media would much rather cover the controversy over an Israeli committee to investigate the war in Lebanon (which has yet to become operational) and compete for the latest sensations emanating from ongoing police investigations against President Katsav and a series of ministers - suspects of sexual harassment and corruption. Even the release, on the eve ofthe Jewish New Year, of the annual population report by the Israeli Central Bureau of Statistics did not trigger talk about the “demographic problem” to convince people of the appropriateness of some pullout from occupied Palestinian land. “Now the Palestinians have been forgotten and demographics have been forgotten – all because the data can’t be used for political ends.”(2)

True, the vacuum created in Middle East diplomacy by the shelving of Israel’s plan does give rise to concern. Since the end of Israel’s war on Lebanon, we have witnessed a surge of diplomatic efforts by the Quartet, the International Crisis Group, leaders of Arab states and others, calling for a new initiative to fill this vacuum and ensure that some Middle East “peace process” be put in motion. At the same time, the international community appears to have accepted the end of “convergence” without much ado and as a matter of fact – a somewhat puzzling response given the international enthusiasm and support with which Israel’s plan was initially received.

At the same time, the major portion of international energy and resources continue to be invested into treating the symptoms of the Palestinian patient. International actors maintain the idea that new ways of humanitarian and development assistance to the Palestinian people in the OPT could support a political solution of this protracted conflict. This, although no substantive political process is in place for conflict resolution and political and military factors are the primary cause in on-going de-development and displacement in the OPT.

Moreover, Western states, the Quartet and the EU have yet to recognize that they are part of the problem and not the solution. Neither Israel nor the Hamas election victory, but rather the economic and diplomatic sanctions imposed on the occupied Palestinian people by Western states, have plunged Palestinian society into the unprecedented political, economic and humanitarian crisis and poverty which now threaten its very foundations. As it appears today, these sanctions were readily imposedin response to political pressure exerted by the United States and Israel, and no serious efforts were made by the international community to study in advance the likely impact of such sanctions on the economic, social and political fabric of Palestinian society in the OPT. Since then, international actors, including the World Bank, UNDP, UNCTAD, UNRWA, OCHA, and the UN Assistant Secretary forHumanitarian Affairs and Coordinator of Emergency Aid, Jan Egeland, have invested major resources in the study and documentation of the Palestinian crisis.

These carefully compiled studies, findings and recommendations, however, represent international activity post-factum and are reminiscent more of an autopsy - than of effective and planned intervention. In light of the existential crisis caused by the international sanctions regime, the Quartet’s Temporary International Mechanism for Palestinian basic needs (TIM) is an utterly ineffective and even counterproductive response. Financial support provided via TIM is far too little, too late; it has raised false hopes for salaries among Palestinians

Sanctioning an Occupied People
“[T]he Palestinian people have been subjected to economic sanctions - the first time an occupied people have been so treated. This is difficult to understand. Israel is in violation of major Security Council and General Assembly resolutions dealing with unlawful territorial change and the violation of human rights and has failed to implement the 2004 advisory opinion of the International Court of Justice, yet it escapes the imposition of sanctions. Instead the Palestinian people, rather than the Palestinian Authority, have been subjected to possibly the most rigorous form of international sanctions imposed in modern times.”

Report of the Special Rapporteur on the Situation of Human Rights in the Palestinian Territories Occupied Since 1967, Human Rights Council, Second session, A/HRC/2/5, 5 September 2006, para. 70.

who have thus delayed and lost opportunities for effective coping; the mechanism is divisive and destroys the remnants of transparency and due process found in the Palestinian Authority’s political and economic system; it does not address the needs of the economically vital Palestinian private sector; and, it further undermines the institutions of the Palestinian “state-in-the-making” built with the help of international development aid in the past.

A serious international effort at conflict resolution and supportive development assistance would have to tackle the root causes of this protracted conflict, i.e. Israel’s colonialism and systematic discrimination of Palestinians. It would have to address the question of Palestinian refugees as well as the illegal situation created in the OPT in the course of 40  years of Israeli occupation.
Such effort would have to be based squarely on relevant international law, including IHL, IHRL and the 2004 ICJ advisory opinion, and include effective mechanisms of enforcement and third party arbitration. Unfortunately but not surprisingly, all ideas launched since the end Israel’s war on Lebanon and “convergence” focus on mechanisms for “getting the parties back to talking” and herald no such new approach by the international community. In the words of John Dugard, UN Special Rapporteur on Human Rights in the OPT, international diplomacy has failed the Palestinian people and we can only appeal to the wider international community to concern itself with our plight.(3)

On the ground: apartheid unfolding The end of “convergence”
may be good news for the some 2.5 million Palestinians in the occupied West Bank who will thus be spared the experience of the 1.4 million in the Gaza Strip,(4) imprisoned and impoverished as a result of Israel’s first “successful” experiment with unilateral withdrawal in the summer of 2005.
More importantly, the end of “convergence” has not created a vacuum “on the ground.” While international initiatives have yet to fill the diplomatic vacuum, Jewish colonies expand unhampered in occupied Palestinian land in the West Bank where Jewish settlement is now no longer restrained by the need to show commitment to a “convergence plan”.

A report published by Peace Now in October shows that since the beginning of the year, until August, “tenders have been issued for the construction of 952 housing units in settlements, compared to tenders for 235 housing units that were issued by last August.” Not only were so-called “outposts” not removed, but building there was accelerated and land was broken up for roads and prepared for construction. A decree was signed by the Chief of Israel’s army Central Command for the expansion of the jurisdiction of four colonies: Givat Zeev, Oranit, Beitar Elit and Maskiot. Peace Now also argues that expansions of many “outposts” were carried out under the cover of the war against Lebanon.

At the same time, the post-convergence Israeli government continues construction of its Wall on occupied Palestinian land and has neither the political will nor the ability to cease such construction. The result is an absurd scenario where Israel both annexes de facto Palestinian land to the West of the Wall, while Jewish colonies continue to grow and expand to the East of the Wall. For Palestinians, this post-convergence scenario means more displacement and dispossession on both sides of the Wall.

More in this category: « Editorial: A Few Words on the “New Order” International Mechanism to Respond to Situations of Internal Displacement »
back to top